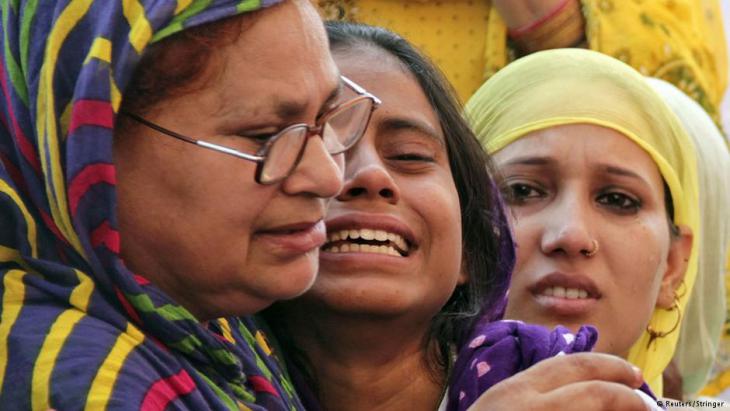 Despite being India′s largest minority, the Muslim community is marginalised both economically and politically. Although Muslims are frequently targeted in acts of communal violence, the government and the population at large generally associate Islam with terrorism. Ghazala Jamil examines the quest of Indian Muslims for genuine participation and representation

The conventional narrative of Muslims in Indian politics is that they are a socio-economically disadvantaged group and that the Congress party and, to some extent, other political forces have been winning their collective votes by catering to their special interests. This narrative does not make sense. If Muslims have been a government-appeased vote bank since India′s independence in 1947, why are they still ″backwards″ in socio-economic terms? Obviously, things are more complex than conventional wisdom would have us believe.

To understand the present, it is useful to consider the past. In colonial times, British history books portrayed Indian Muslims as foreign aggressors, comparing the British Empire favourably to Mughal rule. Independent India inherited this discourse and the idea of Muslims as foreigners was reinforced because Pakistan became a separate country. Although many Indian Muslims preferred to stay in India, they continued to be viewed with suspicion.

Today, India boasts the world′s third largest population of Muslims after Indonesia and Pakistan. 172 million Indians are Muslim. Representing about 14% of the population, they are the second-largest religious group after Hindus. Most Muslims live in urban areas. Their homes tend to be in segregated enclaves that are derisively called ″mini-Pakistans″. Those of Islamic faith are exposed to prejudice, suspicion, discrimination and violence. They do not enjoy equal opportunities, as was made clear by the Sachar Committee report published in 2006.

The truth is that there have not been any major government programmes to improve the status of Muslims. On the other hand, governments have heeded calls from patriarchal, self-styled leaders of Muslims on ″protecting Muslims′ faith″. 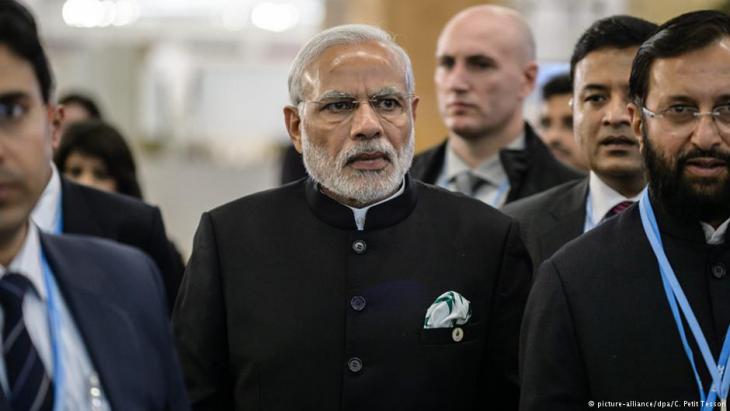 Minority of 172 million: Modi cannot afford to marginalise the Muslims, even though they make up a mere 14 percent of India's exploding population. Yet Modi's BJP party openly admits that anti-Muslim pogroms help "consolidate the Hindu vote"

Such action has been largely symbolical and is supposed to ensure that Muslims are able to live according to the Koran. Unfortunately, the approach has also allowed right-wing Hindus to lambast Muslims still further for their ″unequal treatment of women″. The truth is, however, that Indian society in general is deeply patriarchal and no religious community treats women fairly. The Hindus are no exception.

Misconceptions about Muslims abound. The community is generally described as a homogenous group with rigid religious beliefs. In his book of 2008, Mushirul Hasan of Jamia Millia Islamia, India′ s national Muslim university in Delhi, however, refutes the idea of a monolithic block being guided primarily by faith doctrines. He points out that nuances and differences within the community tend to be ignored.

In spite of doing nothing to improve the socio-economic situation of Muslims, Congress-led governments have been accused of ″pampering″ Muslims. This is a topic the Bharatiya Janata Party (BJP), which is now in power, keeps returning to. The BJP belongs to the Sangh Parivar, a group of organisations that emphasises Hinduism in a supremacist manner.

The BJP and related organisations have a history of anti-Muslim violence. Following mass riots in 1992, hooligans destroyed Babri Mosque in Ayodhya. That event triggered violence across northern India, Pakistan and Bangladesh. Thousands were killed. In 2002, an anti-Muslim pogrom rocked the state of Gujarat. In 2013, there were similar ″riots″ in Uttar Pradesh. 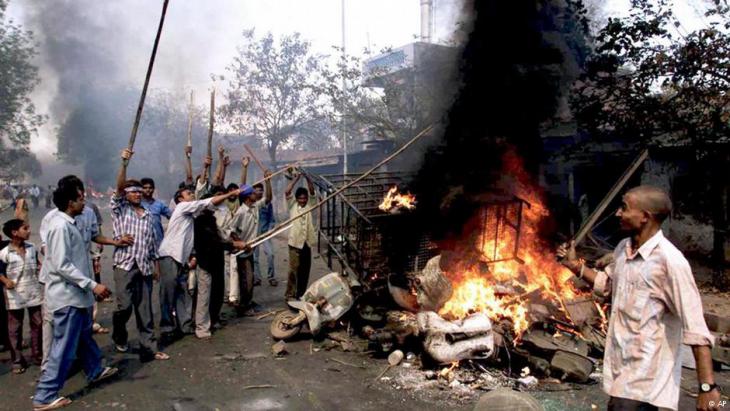 Intimidation tactics: the 2002 pogrom in Gujarat clearly demonstrated the innate imbalance in interreligious tensions. "The term 'Hindu-Muslim riots' suggests that both sides are equally to blame. One brutal irony is that precisely because Muslims are the target of communal violence means it is easy to portray them as potential terrorists and terror sympathisers," writes Jamil

Violent events of this kind are typically called ″Hindu-Muslim riots″. The term is misleading, since there is evidence that attacks on Muslims, their property and their religious freedom are generally planned and premeditated. The term ″Hindu-Muslim riots″, however, suggests that both sides are equally to blame. One brutal irony is that precisely because Muslims are the target of communal violence means it is easy to portray them as potential terrorists and terror sympathisers.

Indeed, BJP leaders have admitted that pogroms serve to ″consolidate the Hindu vote″ and are intended to render the political participation of Muslims futile. While Prime Minister Narendra Modi likes to present himself as a champion of development, his subtext is always one of consolidating Hindu power.

Modi was chief minister of Gujarat during the pogrom of 2002 and he never disowned the perpetrators. Since Modi became prime minister, there has been a spate of organised and sporadic violent attacks on Muslims across India. It obviously encourages attackers to know that their man is in power.

The idea of the Congress party monopolising ″the″ Muslim vote, moreover, is nonsense. Raphael Susewind and Raheel Dhattiwala conducted research on voting patterns in Gujarat and Uttar Pradesh. It turns out, unsurprisingly, that Muslims tend to vote for the candidate of any party that is most likely to beat the BJP candidate or its allies in their constituency. In some cases, where Muslims feel particularly threatened, they even vote for anti-Muslim candidates in an attempt to conform to the perceived majority.

Indian Muslims are generally very conscious of being in the minority and depend on peace and harmony. They know that aggression does not offer an escape from their miserable standard of living. The silver lining to the dark cloud is that India′s Muslims are beginning to demand equal rights.

Increasingly, they are challenging the status quo through the courts, demanding that the written principles of India′s constitution must finally prevail over unwritten, but popular ideas of what is wrong or right. Movements for the rights of women and dalits, India′s outcast community, have shown that this can work. 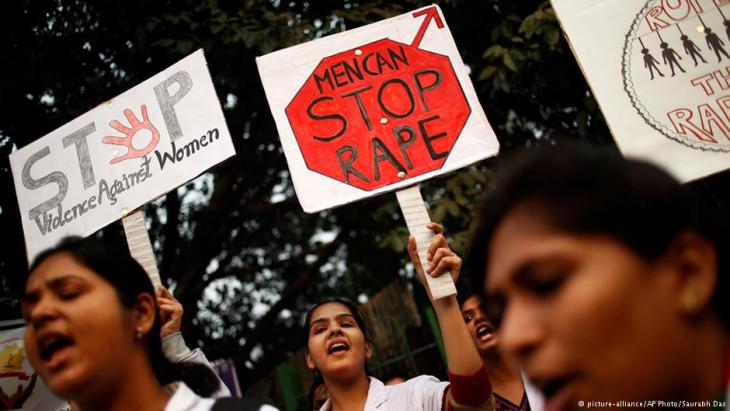 Challenging the status quo: emboldened by the heightened recognition of women's rights following the brutal rape and murder of a female student in Delhi, India's Muslims are also beginning to demand their constitutional rights

It is a good sign that courts have begun to acquit individual Muslims who were accused of terrorism and detained without proof for years. Victims of violence in the 2013 riots in Uttar Pradesh have gone to court and other related cases are proceeding in a slow but promising manner. Indian Muslims are increasingly articulating their sense of injustice at being treated as non-citizens in their own country. They are expressing their dissatisfaction at being placated by mere lip service to cultural rights as a minority. They are beginning to claim their rights as equal citizens of a democratic country.

Indeed, identity plays an important role in Muslims′ yearning for participation and for representation. But it plays a role in the sense of the positioning of the community in Indian society, state and polity, rather than in the sense of some quintessential quality of Islam – the faith of the Muslim Indian subject.

Ghazala Jamil is an assistant professor at the Centre for the Study of Law and Governance of Jawaharlal Nehru University in Delhi.

Home
Print
Newsletter
More on this topic
Indian Muslims' attitudes to the election of Narendra Modi: Apprehension and hopeInterview with the political theorist Rajeev Bhargava: "The BJP has to give up its obsession with Muslims" The Babri Mosque controversy in India: Sacred ground for Muslims and Hindus
Related Topics
Colonialism, Democracy and civil society, Dialogue of Cultures | Intercultural Dialogue, Dialogue of Religions, Freedom of religion, Human rights, Islam in Southeast Asia, Islamophobia, Narendra Modi
All Topics

Hindu fundamentalist Ashok Sharma has devoted his life to championing the deeds of an Indian "patriot": not revered independence hero Mahatma Gandhi, but the man who shot him dead END_OF_DOCUMENT_TOKEN_TO_BE_REPLACED

At the end of every year, the team at Qantara.de gives you a run-down of the ten most-read articles on the site over the past 12 months. Here is a quick overview of the stories ... END_OF_DOCUMENT_TOKEN_TO_BE_REPLACED

COP27 in Sharm el-Sheikh is turning into a PR disaster for Egypt’s military regime. Instead of praise for the host, the news is full of solidarity for imprisoned activist Alaa ... END_OF_DOCUMENT_TOKEN_TO_BE_REPLACED

India is projected to see an explosion in its urban population in the coming decades, but its cities already cannot cope and climate change will make living conditions harsher ... END_OF_DOCUMENT_TOKEN_TO_BE_REPLACED

About time Muslims in India stopped taking Madrassa eduction, instead took up mainstream studies as a majority. Religious study on holidays can be understood so long as it doesn't take away from sports and rest. The other key factor is gradual Arabisation of Indian Muslims. They need to eschew Arabic and Urdu for their original native languages. Quran in Arabic should be banned in India. Let Muslims read it in Indian languages.

I think main issue is Family Planning is not there in Islam and with so high population and having 4-5 kids, even middle class people becomes poor and social security becomes issue... I went to teach in our community so many Population Control program but nobody wants to listen, poverty is the result of all this..

END_OF_DOCUMENT_TOKEN_TO_BE_REPLACED
Social media
and networks
Subscribe to our
newsletter