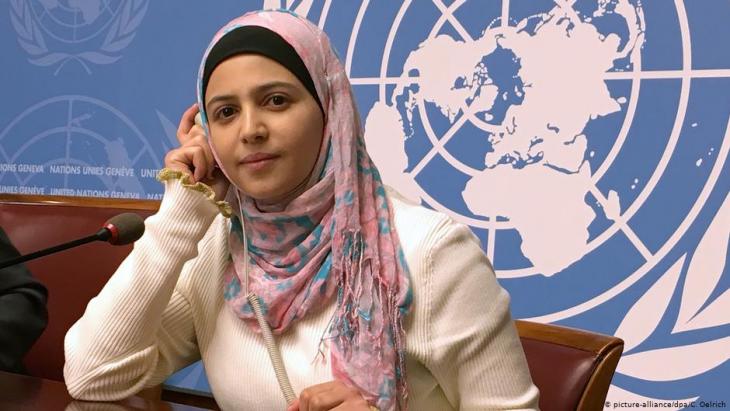 Education is the key to the future. Muzoon Almellehan has known this since she was 14 years old. But she lives in a Jordanian refugee camp. And since then she has been fighting for better education for children in crisis zones. By Bettina Baumann

Just a few years ago, when she was 14 years old, bombs started to fall on Muzoon Almellehan's hometown of Daraa, in south-western Syria. Civil war was intensifying, and her parents saw escape as the only alternative. They left the country with their four children in 2013. They landed in Jordan – in Za'atari, the second-largest refugee camp in the world.

Although her father has asked her to pack only the bare necessities, Muzoon carried a suitcase full of books with her. "Even as a child, I knew that education was the key to my future, so when I fled Syria, the only belongings I took with me were my school books," the now 21-year-old explained to UNICEF in June 2017.

Despite her exceptional situation, Almellehan was still hungry to learn. But education was not a priority for most people in the camp, where a feeling of hopelessness prevailed, so they did not participate in the educational opportunities offered. Almellehan went from tent to tent, trying to convince parents and children of the importance of school. "If you have an education, no-one take it away from you," she said again and again.

Those were the seeds of Almellehan's commitment to achieving better access to education in crisis zones. In 2017 she was appointed UNICEF goodwill ambassador — the youngest ever, at 19, and the first with official refugee status.

In this capacity, Almellehan, who now lives in Britain, has returned to Za'atari, met girls in Chad who fled from Boko Haram and spoken to senior political representatives at the G20 summit in Hamburg about the millions of children forced to flee their homes as a result of conflicts, wars or natural disasters. Time magazine named her one of the 30 most influential teenagers in the world in 2017.

Almellehan is proud of her work as a UNICEF ambassador: "As a refugee, I saw what happens when children are forced into early marriage or manual labour" she said. "They lose out on education and they lose out on possibilities for the future," she added. "This is why I am proud to work with UNICEF to help give these children a voice and enable them to go to school."

Last Sunday, 9 February, Germany honoured Almellehan's commitment with the Dresden Peace Prize. The prize association praised her extraordinary courage and commitment. "In the face of great resistance, she has stood up for children and young people, and she continues to fight for their educational opportunities," Beate Spiegel of the Klaus Tschira Foundation, which sponsors the €10,000 award.

"Education is perhaps the greatest good that can be given to young people who have had to flee. It paves the way for regaining dignity and meaning after the trauma of expulsion,"

Kim Phuc Phan Thi, the 2019 prizewinner, gave the laudatory speech. The woman is known as the "Napalm Girl" thanks to a 1972 photo taken during the Vietnam War that shows her as a child, naked and screaming after a napalm attack on her village. The image contributed to a change in attitude among Americans toward the war.

The International Peace Prize "Dresden Prize", as it is officially known, was awarded in 2020 for the 11th time. The ceremony was held in the Dresden Semperoper. Previous laureates include former Soviet leader Mikhail Gorbachev, Argentine-born pianist and conductor Daniel Barenboim and the U.S. war photographer James Nachtwey.

Business in the Moroccan city of Tangiers is booming due to its location at the nexus of global trade routes. But many locals are failing to reap the benefits. What they crave ... END_OF_DOCUMENT_TOKEN_TO_BE_REPLACED

Morocco and the European Union are at cross purposes when it comes to the Western Sahara. And, as Germany does not support Moroccan claims to the territory, a major conflict has ... END_OF_DOCUMENT_TOKEN_TO_BE_REPLACED

Jewish voices are much more diverse than the public often sees. Jewish men and women who oppose the injustice of Israeli occupation in the West Bank deserve our respect and ... END_OF_DOCUMENT_TOKEN_TO_BE_REPLACED

They’ve already got the Louvre; they’ll soon have a Guggenheim Museum as well – and now the Emirates have added literature to their quest for cultural supremacy in the Arab world ... END_OF_DOCUMENT_TOKEN_TO_BE_REPLACED

The Germans have a fragmented perception of the conflict between Israel and the Palestinians, and their discourse is dominated by certain catchphrases. All the while, there is a ... END_OF_DOCUMENT_TOKEN_TO_BE_REPLACED

An unusual organisation brings Jews and Muslims together to fight hate and promote dialogue. In the small central German city of Marburg they have been jointly calling for an end ... END_OF_DOCUMENT_TOKEN_TO_BE_REPLACED
Author:
Bettina Baumann
Date:
Mail:
Send via mail

END_OF_DOCUMENT_TOKEN_TO_BE_REPLACED
Social media
and networks
Subscribe to our
newsletter