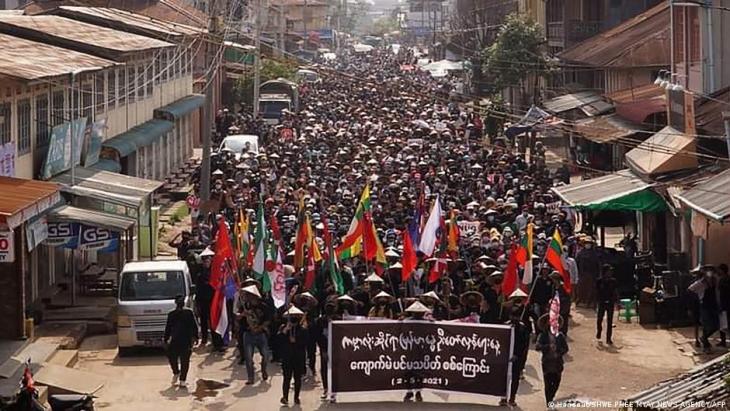 Myanmar will release more than 5,000 people jailed for protesting against a February coup which ousted the civilian government, the country's junta chief said on Monday.

A total of 5,636 prisoners will be freed to mark the Thadingyut festival later in October, Min Aung Hlaing said, days after he was excluded from a regional summit over his government's commitment to defusing the bloody crisis.

Myanmar has been mired in chaos since the coup, with more than 1,100 civilians killed in a bloody crackdown on dissent and more than 8,000 arrested according to a local monitoring group. More than 7,300 are currently behind bars across the country, according to the Assistance Association for Political Prisoners.

The junta chief gave no details on who would be included in the list and prison authorities did not respond to requests for comment. Myanmar authorities released more than 2,000 anti-coup protesters from prisons across the country in July, including journalists critical of the military government.

Those still in custody include the American journalist Danny Fenster, who has been held since being arrested on 24 May.

The announcement of the amnesty comes after the Association of Southeast Asian Nations on Friday decided to exclude Min Aung Hlaing from an upcoming summit over the military government's handling of the crisis.

Foreign ministers of the bloc agreed that a "non-political representative" for Myanmar would be invited to the October 26-28 summit instead.
The bloc, widely criticised as a toothless organisation, took a strong stand after the junta rebuffed requests that a special envoy meet with "all stakeholders" in Myanmar - a phrase seen to include ousted civilian leader Aung San Suu Kyi.

The statement noted "insufficient progress" in the implementation of a five-point plan agreed by ASEAN leaders in April to end turmoil following the coup.

The junta slammed the decision, accusing ASEAN of breaching its policy of non-interference in the domestic affairs of member states.

Myanmar, mostly ruled by the military since a 1962 coup, has been a thorn in ASEAN's side since it joined in 1997. Min Aung Hlaing's administration has justified its power grab citing alleged vote rigging in last year's elections, which Suu Kyi's National League for Democracy (NLD) party won convincingly.

The coup snuffed out Myanmar's short-lived dalliance with democracy and the 76-year-old Suu Kyi now faces a raft of charges in a junta court that could see her jailed for decades.

Last week her chief lawyer said he had been banned by the junta from speaking to journalists, diplomats or international organisations. Nobel laureate Suu Kyi, who has spent much of her life resisting Myanmar's generals, is scheduled to testify in court for the first time later this month.    (AFP)

END_OF_DOCUMENT_TOKEN_TO_BE_REPLACED
Social media
and networks
Subscribe to our
newsletter