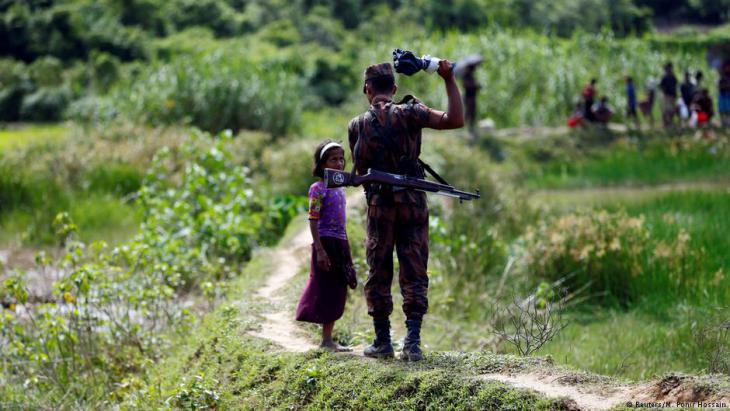 The plight of the Rohingya has cast a dark shadow over the image of Myanmar's de facto leader Aung San Suu Kyi, who has come under increasing fire over her perceived unwillingness to speak out against the treatment of the Rohingya or criticise the military.

Suu Kyi, a former political prisoner of Myanmar's junta and Nobel peace laureate, has made no public comment since the latest fighting broke out in Myanmar's western Rakhine state. This prompted criticism on Monday from fellow Nobel peace laureate Malala Yousafzai and Muslim countries in Asia targeting Suu Kyi.

"Every time I see the news, my heart breaks at the suffering of the Rohingya Muslims in Myanmar," Pakistani activist Yousafzai, who famously survived being shot in the head by the Taliban, said in a statement on Twitter. "Over the last several years I have repeatedly condemned this tragic and shameful treatment. I am still waiting for my fellow Nobel laureate Aung San Suu Kyi to do the same," she added.

The growing crisis threatens Myanmar's diplomatic relations, particularly with Muslim-majority countries in Southeast Asia, where there is profound public anger over the treatment of the Rohingya.

Indonesia's Foreign Minister Retno Marsudi met Suu Kyi as well as Myanmar's army chief General Min Aung Hlaing in Naypyidaw on Monday in a bid to pressure the government to do more to alleviate the crisis. "Once again, violence, this humanitarian crisis has to stop immediately," Indonesian President Joko Widodo told reporters on Sunday as he announced Retno's mission there.

Pakistan's Foreign Ministry released a statement saying it was "deeply concerned over reports of growing number of deaths and forced displacement of Rohingya Muslims" and urged Myanmar to investigate reports of atrocities against the community. 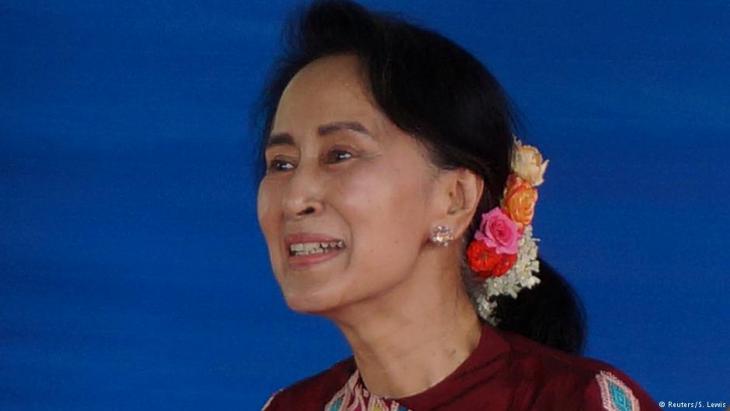 A laureate of peace? Under increasing fire over her perceived unwillingness to speak out against the treatment of the Rohingya or criticise the military, Myanmar’s de facto leader, Aung San Suu Kyi recently resorted to the ′fake news′ excuse favoured by others on the world stage. Passing no comment on the plight of the Rohingya, she blamed ″terrorists″ for disseminating a huge ″iceberg of misinformation″ about the situation in Rakhine

Muslim-majority Malaysia has also seen public protests since the latest round of Rakhine violence began. "We urge for calm and restraint," Prime Minister Najib Razak tweeted. "The dire situation facing our Rohingya brothers and sisters must be alleviated for good of Myanmar and region."

More than 125,000 Rohingya Muslims have fled west toward Bangladesh following the worst wave of violence in Rakhine since communal conflict broke out in the region in 2012. The Myanmar army has been accused of launching a violent campaign since 25 August, when Rohingya insurgents killed 12 police.

"Many of the refugees who have poured across the border into Bangladesh have spoken of witnessing horrific abuses by Myanmar's security forces, including killings and burnings of whole villages," said Amnesty International's Asia spokesperson Olof Blomqvist.

Authorities in Bangladesh started sending a first group of more than 1,500 Rohingya refugees to the isolated island of Bhasan Char, despite calls by human rights groups for a halt ... END_OF_DOCUMENT_TOKEN_TO_BE_REPLACED

The first hearings at the International Court of Justice reflect the entrenched positions in the Rohingya crisis. Rodion Ebbighausen believes the trial may finally help to soften ... END_OF_DOCUMENT_TOKEN_TO_BE_REPLACED

Myanmarʹs Aung San Suu Kyi and Hungaryʹs Viktor Orban have discussed their mutual fear of Muslims. In doing so, the Burmese leader has again showed she has lost the moral standing ... END_OF_DOCUMENT_TOKEN_TO_BE_REPLACED

Fatima was gang-raped during attacks on Rohingya Muslims as part of Myanmar's ethnic cleansing campaign. Now, she and her family live in a camp in Bangladesh with few prospects, ... END_OF_DOCUMENT_TOKEN_TO_BE_REPLACED

Islamophobia is rife in Sri Lanka, Myanmar and Thailand, with Buddhist monks heading up the hate campaigns against Muslims. Yet the roots of the conflict run deep. A report by ... END_OF_DOCUMENT_TOKEN_TO_BE_REPLACED

The campaign of ethnic cleansing now being carried out against Myanmar′s Rohingya confronts the world with one of those moments that seem to arrive unannounced. Surely, by now, we ... END_OF_DOCUMENT_TOKEN_TO_BE_REPLACED
Author:
Soraya Auer
Date:
Mail:
Send via mail

END_OF_DOCUMENT_TOKEN_TO_BE_REPLACED
Social media
and networks
Subscribe to our
newsletter