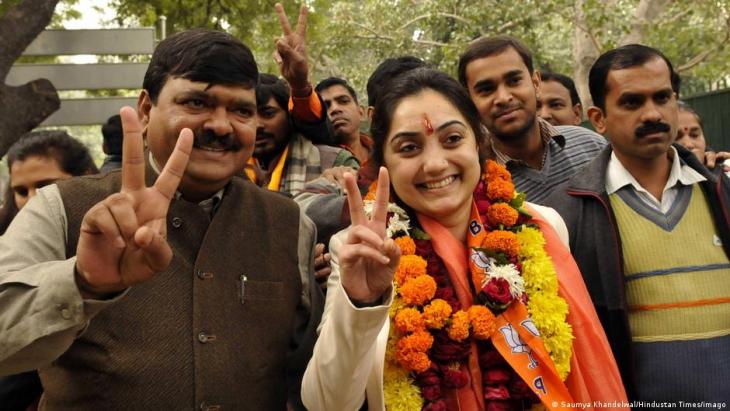 Anger in the Middle East is spreading over comments made by an official of India's ruling BJP about the Prophet Muhammad, with various countries summoning New Delhi's envoy and a Kuwaiti supermarket removing Indian products

The United Arab Emirates has become the latest country to voice its condemnation of the remarks, saying they were "contrary to moral and humanitarian values and principles". The UAE's foreign ministry underlined the "need for respecting religious symbols... and countering hate speech", state news agency WAM reported.

Saudi Arabia, Qatar and other countries in the region, as well as the influential Al-Azhar University in Cairo, have condemned the comments by a spokeswoman for Indian Prime Minister Narendra Modi's Bharatiya Janata Party, who has since been suspended.

In Kuwait, supermarket workers piled Indian tea and other products into trolleys in a protest against comments denounced as "Islamophobic".

At the Al-Ardiya Co-Operative Society just outside Kuwait City, sacks of rice and shelves of spices and chillies were covered with plastic sheets. "We have removed Indian products", signs in Arabic read. "We, as a Kuwaiti Muslim people, do not accept insulting the Prophet," Nasser Al-Mutairi, CEO of the store, said. An official at the chain said a company-wide boycott was being considered.

Comments by party spokeswoman Nupur Sharma describing the Prophet Muhammad's relationship with his youngest wife have sparked a furore among Muslims. 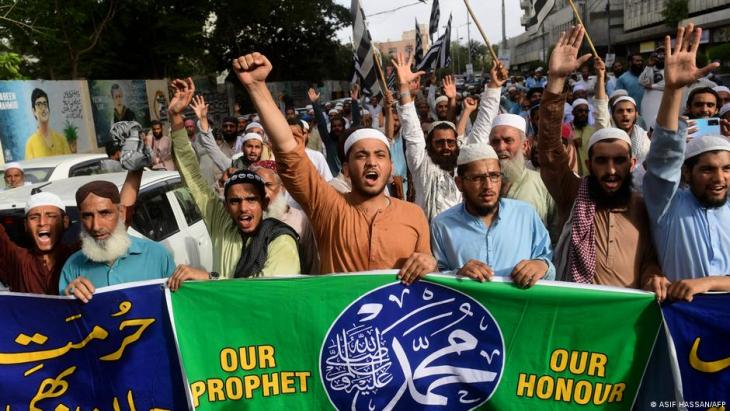 Protesters in Pakistan demonstrate following remarks made about the Prophet Muhammad by a leading official of India's ruling Bharatiya Janata Party. Egypt's Al-Azhar University, one of Islam's most important institutions, said the comments were "the real terrorism" and "could plunge the entire world into deadly crisis and wars", while the Saudi-based Muslim World League said the remarks could "incite hatred"

Sharma's remarks during a televised debate last week were blamed for clashes in an Indian state and prompted demands for her arrest. Anger spread overseas to Muslim countries about the remarks.

Modi's party, which has frequently been accused of acting against the country's Muslim minority, on Sunday suspended Sharma for expressing "views contrary to the party's position" and said it "respects all religions".

Sharma said on Twitter that her comments had been in response to "insults" made against the Hindu god Shiva. "If my words have caused discomfort or hurt religious feelings of anyone whatsoever, I hereby unconditionally withdraw my statement," she said.

On Sunday, Qatar demanded that India apologise for the "Islamophobic" comments, as India's Vice-President Venkaiah Naidu visited the gas-rich Gulf state in a bid to bolster trade. Iran followed Qatar and Kuwait by summoning the Indian ambassador to protest in the name of "the government and the people", state news agency IRNA said late on Sunday.

Al-Azhar University, one of Islam's most important institutions, said the comments were "the real terrorism" and "could plunge the entire world into deadly crisis and wars".

The Saudi-based Muslim World League said the remarks could "incite hatred", while Saudi Arabia's General Presidency of the Affairs of the Grand Mosque and the Prophet's Mosque called them a "heinous act".

The row follows anger across the Muslim world in 2020 after French President Emmanuel Macron defended the right of a satirical magazine to publish caricatures of the Prophet Muhammad. French teacher Samuel Paty was beheaded in October 2020 by a Chechen refugee after showing the cartoons to his class in a lesson on free speech. Images of the Prophet are strictly forbidden in Islam.

In further criticism of the Indian official, the Gulf Cooperation Council, an umbrella group for the six Gulf countries, "condemned, rejected and denounced" her comments. Bahrain also welcomed the BJP's decision to suspend Sharma over "provocation to Muslims' feelings and incitement to religious hatred".

Gulf countries are a major destination for India's overseas workers, accounting for 8.7 million out of a worldwide total of 13.5 million, Indian foreign ministry figures show. They are also big importers of produce from India and elsewhere, with Kuwait importing 95 percent of its food according to the trade minister.

Kuwaiti media have reported that the government asked New Delhi for an exemption from India's surprise ban on wheat exports over food security and inflation worries.    (AFP)

Women's empowerment in the Gulf has become a tool of deflection, rather than a genuine effort to promote women’s full and equal participation in society. By Mira Al-Hussain END_OF_DOCUMENT_TOKEN_TO_BE_REPLACED

A straightforward message emerged from last week’s meeting in the Negev desert of the foreign ministers of four Arab countries, Israel and the United States: Israel is key to the ... END_OF_DOCUMENT_TOKEN_TO_BE_REPLACED

Hamburg lawyer Eugen Balin is a member of the World Jewish Congress' Jewish Diplomatic Corps. At the end of 2021, a delegation of the Corps visited the United Arab Emirates, which ... END_OF_DOCUMENT_TOKEN_TO_BE_REPLACED

A number of Arab League member states have announced in recent weeks that they intend resuming relations with the Syrian regime. A potential invitation to the Arab League summit ... END_OF_DOCUMENT_TOKEN_TO_BE_REPLACED

The catastrophic human rights situation in Bahrain is being largely ignored by the rest of the world. Despite all the damning evidence, which includes a Human Rights Watch report ... END_OF_DOCUMENT_TOKEN_TO_BE_REPLACED

Germany's foreign policy is explicitly values-based. But what happens, Ralf Bosen asks, when democracy, the rule of law and human rights collide with the logic of trade and ... END_OF_DOCUMENT_TOKEN_TO_BE_REPLACED
Date:
Mail:
Send via mail

END_OF_DOCUMENT_TOKEN_TO_BE_REPLACED
Social media
and networks
Subscribe to our
newsletter