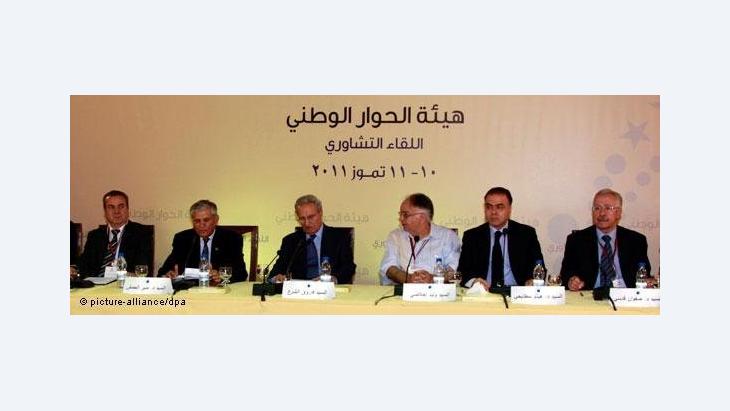 The latest meeting for the purpose of national dialogue in reality served the regime in Damascus as an opportunity to legitimise its own sovereignty as well as to weaken and isolate the opposition, in the opinion of the Syrian dissident and writer Yassin Al Haj Saleh

The point that the speakers for the Syrian regime are currently insisting on is evidently that the actions taken by the military and the security forces are aimed at organised armed gangs operating within the country. This assertion has become the foundation for the official version of what is happening in the country in announcements made to the Syrian populace, but even more so in those meant for the rest of the world. The only problem is that it's not true.

Fairy-tale world of the regime

We note here that the government has been speaking for over a month now of "armed Salafist emirates". Perhaps it has dawned on the state storytellers in the meantime that these "Salafist emirates" have not yet issued a single communiqué and that their emirs have not made any public statements, that no website exists on the Internet proclaiming their cause and that the number of their "subjects" is as high as happens to fit the regime's purposes at any given time. 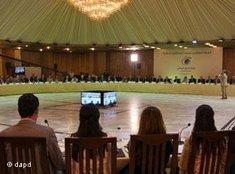 A dialogue in appearance only: Not one representative of the Syrian protest movement took part in the national dialogue initiated by the regime, which took place in Damascus on 10 July

​​All of this is hard to digest. Nevertheless, a spokeswoman close to the regime is bent on serving up the following tale to the US media: "There is an organised group consisting mostly of religious extremists that is carrying out assassination attempts and brutal attacks."

Most Syrians know full well that there is an "organised group" that is committing "assassinations and attacks", and "their deeds" are in fact documented so thoroughly as to leave no doubt as to their crimes.

Although this group is definitely extremist, it would "mostly" be difficult to classify it amongst the "religious extremists" – which gives the statements made by the spokeswoman to Sky News regarding the existence of armed groups of religious extremists as much cogency as children's stories about the existence of elves and goblins. They even serve the same function: to sow fear in the listeners of a strange and evil world that, because it is invisible, is even more dangerous and foreign. This is the same world that never seems to tire of conspiring against "us".

The legend of armed resistance

As soon as people start talking about events in Arabic, however, the terms "Salafist" and "emirates" are dropped and what remains are undefined armed groups to which no specific qualities are attributed. These are groups that for no apparent reason are committing horrific sabotage and hatching a conspiracy, whose members and driving forces are unknown. They don't stand for anything and have no goals beyond the arbitrary killing of civilians and members of the military.

The strange thing is that they are active in those very regions where peaceful protests are taking place, and what is even more inexplicable is that they don't show up at the "spontaneous people's rallies" organised by the regime. Above all, though, they are so numerous and strong that they easily outnumber the security forces and the army by dozens, even by hundreds.

And yet there is one aspect of the story about armed groups that is not invented at all. It has in fact sometimes come to pass that angry people have defended themselves, weapon in hand, against what has been perpetrated on their villages and cities, and also their families.

In other cases, opposing positions have been taken up by members of the mid- and lower ranks of the army that have led to armed conflicts between them. But these are not organised armed groups. This whole story was invented for the sole purpose of conflating such groups with the peaceful protests that have represented the "good news" from Syria for the past 15 weeks.

It is telling how the spokeswoman herself was even able to tell CNN that "there are many invented stories circulating about the security forces". It would probably be difficult to find words that would more thoroughly insult thousands of Syrians who are obviously only trying to defend the equilibrium!

Isn't this preoccupation with the problem of armed groups coming a bit late in the game? Is it worthwhile to react to media that are fundamentally predicated on scorning the people and idolising the regime? Or to respond to official speakers bereft of aims or principles? But those who take on the trials and tribulations of life find themselves compelled to expose the prevarications of people who have never shrunk from lying. What must be, must be.

An "irrelevant damage", including 1,650 dead civilians and 15,000 refugees in Turkey and Lebanon: Ever since the beginning of the uprising four months ago, Bashar al-Assad has proceeded with utmost brutality against regime critics, opposing any democratic opening of his country

We have to do something, because this lie has been revived recently and has taken on new life: in the same conversation with CNN, the spokeswoman namely said: "When you have a climate of violence, damage is irrelevant. We hope however to be able to isolate any armed or violent grouping by rapidly conducting a national dialogue and working together with the international community to overcome this urgent problem."

We'll just ignore here for a moment that the "irrelevant" damage includes 1,650 dead civilians and 15,000 refugees in Turkey and Lebanon. These are joined by many thousands who have been forced to undergo arrest. Most of them have been subjected to the most extreme torture imaginable. But how are we supposed to ignore this strange talk of "our cooperation with the international community" in solving the "urgent problem", that is, the armed groups?

We have to admit though that the striving for partnership with the international community – although portrayed as conspiratorial – is not as bewildering for us as the penchant of this partnership for "national dialogue" and "the isolation of the armed groupings".

Evidently we are witnessing here elements of a new strategy devised by the regime, which tries to justify the use of violence against the uprising under the pretence of the existence of armed groups and combined with the introduction of a domestic "dialogue" and a friendly appeal to "the international community".

Evidently some of the protagonists in the international community of nations, especially those in the USA, are prepared to buy this new strategy. The spokeswoman for the US State Department rushed to describe the meeting of unaffiliated individuals at Hotel Semiramis in Damascus on 27 June as a "key event", and a French speaker also announced it using similar words.

Pressure on the insurgents

They were talking about a meeting that apparently took place in an elite location and to which the media was invited and given the privilege of reporting on. In this way the willingness to accept this new strategy was turned into "a key event". 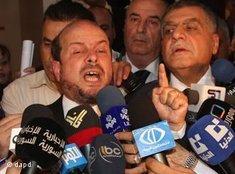 Meek criticism from within: Syrian member of parliament Mohammad Habash, close to the Baath regime, lamented during the "National Dialogue" that thousands of people were still imprisoned without trial

​​Let's set aside for the moment the logic of the conspiratorial character. As initiative, this political ploy evidently satisfied the regime's need to arouse the impression amongst the "international community" that it is open for "the march of democracy" (as the spokeswoman put it) and that participation in such a meeting is an element of this supposed "march", which in turn implies that non-participation and insurgency must be banished to the world of extremism and passivity.

Meetings of this sort – regardless of what purpose their participants are pursuing and what they say on these occasions – hence become a trump card in the hands of the regime, used to put pressure on the insurgents instead of a tool serving the latter as a way to exert pressure on the regime.

Now, a few days after the meeting, it is becoming plain that this encounter was one component in a political and media dynamic that has moved the regime back to the centre of events at the expense of the insurgents. In view of this development, we can conclude that it was ultimately a "secondary initiative" that did not accrue to the benefit of the insurgents, but damaged their cause instead.

The true mission of such a large-scale initiative, though, is to come down in favour of change in Syria that goes far beyond the regime's "reforms" and manoeuvrings, and which means nothing less than genuine change – in persons, thinking and rules of action.

Yassin Al Haj Saleh is a well-known opposition author from Syria who spent 16 years in prison under Hafez al-Assad.

Education is the key to the future. Muzoon Almellehan has known this since she was 14 years old. But she lives in a Jordanian refugee camp. And since then she has been fighting ... END_OF_DOCUMENT_TOKEN_TO_BE_REPLACED

The Kurdish YPG militia did the heavy lifting in the fight against the "Islamic State", yet many foreign YPG adherents, including Germans, have come home to find themselves under ... END_OF_DOCUMENT_TOKEN_TO_BE_REPLACED

The terror attacks in Paris, Brussels and Berlin were all carried out by men radicalised in jail. In Germany, politics and the judiciary are trying out new approaches to prevent ... END_OF_DOCUMENT_TOKEN_TO_BE_REPLACED

The assassination of the Iranian general Qassem Soleimani in a surprise U.S. drone strike is being used by the Islamic Republic of Iran to political ends, says Iranian journalist ... END_OF_DOCUMENT_TOKEN_TO_BE_REPLACED

With "Assad or We Burn the Country", Sam Dagher has furnished the world with some genuine ammunition against the Syrian regime's on-going campaign of disinformation. The only ... END_OF_DOCUMENT_TOKEN_TO_BE_REPLACED

There are only a few thousand Aramaic Christians left in south eastern Anatolia. And they are intent on preserving their ancient culture dating back one-and-a-half millennia. ... END_OF_DOCUMENT_TOKEN_TO_BE_REPLACED
Author:
Yassin al-Haj Saleh
Date:
Mail:
Send via mail