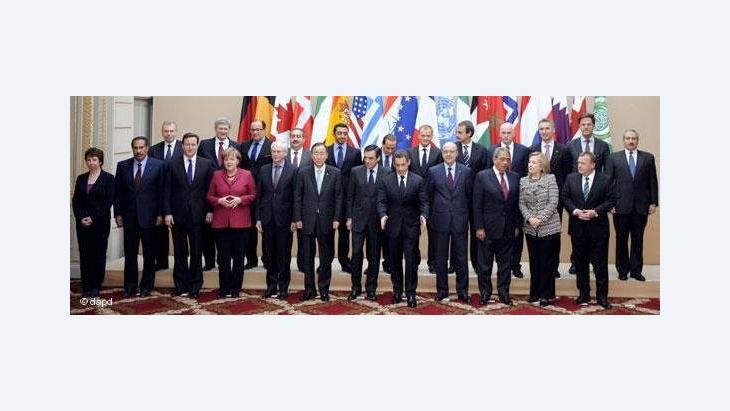 A Moral and Military Dilemma

﻿NATO's mission in Libya has now lasted five weeks, and there are no signs of an ending yet. With the alliance coming under more pressure with each passing day, is a quick and acceptable withdrawal still possible? Sandra Petersmann looks into the matter

For the past month, the international community has been trying to protect Libyan civilians from troops loyal to dictator Muammar Gaddafi. The United States confirmed last week that it would begin sending unmanned armed drones over Libya to support international coalition efforts there, a move welcomed by rebel forces.

But since the resolution agreed by the United Nations Security Council expressly forbids NATO troops on Libyan soil, intervention has only come from the air.

So what is the aim of this mission? Will the protection of civilians only end when Gaddafi has fallen?

Otfried Nassauer, founding director of the Berlin Information-center for Transatlantic Security (BITS), says these questions are yet to be answered. "This is a mission whose aim is not yet clear," he told Deutsche Welle. "If there is no quick military success, it could turn into a long and ugly foreign intervention, like in Afghanistan, or a conflict which you don't know how to end, like Kosovo."

No feasible way out

A quick military success is certainly not in sight. And Nassauer says that NATO has relatively few ways out of Libya, especially because France, Britain and the US have ruled out direct negotiations with the Libyan regime. "In other words, it's not just a military stand-off, but a political one, which both sides can only get out of with difficulty," he said.

​​For NATO, that means more airstrikes, even if weeks and months go by. The idea is to destroy Gaddafi's heavy weapons, his ammunitions stores and his communications structure, but that's extremely difficult, as the current siege of the port town of Misrata has shown.

There, the rebels are desperately calling for western ground troops, and the regime's soldiers and mercenaries have already infiltrated the civilian population and are fighting the rebels from within the city. NATO, meanwhile, is calling on civilians to leave the areas of fighting, so their airstrikes can proceed.

Still, Michael Brzoska of Hamburg University's Institute for Peace Research and Security Policy, says intensifying the military intervention would be a grave mistake for NATO. "I don't see a good exit at the moment," he told Deutsche Welle. "I'm assuming that in the end the country will be divided, perhaps in western and eastern halves, maybe with some enclaves on the Tunisian border. Then NATO will have to guarantee that there will be no major outbreaks of violence between the two sides."

Catch-22: Of all the bad options, perhaps the most defensible is a long-term low-level NATO intervention, says Michael Brzoska, peace and security expert at Hamburg University

​​Brzoska was always opposed to a swift military intervention, and would have preferred a more intensive cooperation with Arab countries. But he says NATO has no choice but to stay the course, for now.

"I don't think Gaddafi can expect NATO to withdraw so he can achieve a military victory. NATO can't afford to lose face like that," Brzoska said. "Of all the bad options, perhaps the most defensible is a long-term low-level NATO intervention," he added.

But Nassauer warned that staying for the long haul entails its own risks. "You can continue bombing for a long time," he said. "But NATO is being damaged because the international community's conflicts over the mission are being carried on within it. It is losing its aura of being the strongest military alliance in the world. Other reputations are being damaged, too – for instance the United Nations, who have committed themselves to this concept of taking responsibility for the protection of civilians, but have been unable to realize it."

Moral arbiters with heavy machinery of war: The new moral principle of the United Nations dictates that the international community is responsible for civilians if the state fails to keep them safe. Pictured: NATO fighter jets on Sicily, Italy

​​The Security Council's Libya resolution expressly confines itself to protecting the civilian population. This new moral principle, which emerged following the genocide in Rwanda and the Balkans, dictates that the international community is responsible for civilians if the state fails to keep them safe. Brzoska describes the dilemma that this leads to, and which has to be faced every time on a case-by-case basis.

"That protection has to be there," he says. "It's very important for a lot of people round the world that they are not at the mercy of their governments. But that doesn't mean that we in the West should be like moral arbiters, deciding the future of a country by keeping long-term military operations going."

It's exactly that – a long-term military operation – that NATO is now committed to in Libya. Whether the members want it or not, NATO is a combatant there, not an arbiter.

Home
Print
Newsletter
More on this topic
The Arabs and the Libyan Intervention: Dont Steal Our Revolution!War in Libya: Trapped in Gaddafis Tiny WorldThe Libyan Opposition against Gaddafi: All Power to the Tribes
Related Topics
All Topics
Date:
Mail:
Send via mail