In Ali Hassan's Intrigue, the Syrian author Nihad Siris writes about living in an Arab dictatorship and about all the insanities and unreasonable demands - great and small - that the regime imposes on its people. Kersten Knipp read the book in its recent German translation

In Ali Hassan's Intrigue, the Syrian author Nihad Siris writes about living in an Arab dictatorship and about all the insanities and unreasonable demands - great and small - that the regime imposes on its people. Kersten Knipp read the book in its recent German translation 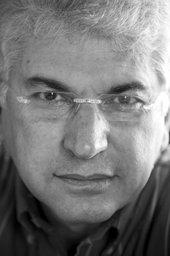 Nihad Siris (born in Aleppo in 1950, studied engineering in Sofia) has been writing short stories and plays for stage and screen since 1987

​​You can tell by the plot of Ali Hassan's Intrigue that its author also works as a scriptwriter: for five years now, the book's protagonist, Fathi Shin, a well-known author, has been banned from writing and publishing.

For those loyal to the regime, he is a "dirty traitor"; after all, he refused to organise a literary competition about the Great Leader in his television show and was promptly relieved of his post.

The writing ban would have long since spelled out his end were it not for his widowed mother, who supports him financially, and especially his lover Lama, a beautiful, intelligent, and confident woman who makes Shin's withdrawal from public life more bearable.

"Sex is a kind of conversation too"

Love needs careful tending. But one doesn't have to write about it, at least not in all its gory details. It suffices to briefly outline the meaning of love.

"Laughter and sex became our weapons; they kept us alive," says the narrator at one point. "Once, writing was the most important motivation for me to keep going. But once silence was imposed on me, we found out that sex is a kind of conversation too, and can even be a scream of protest against the silence."

But the powers that be are not content with Shin's silence; they demand that he actively supports the regime. And so a cruel conspiracy is plotted in the upper echelons of the regime. The head of the secret service decides to woo Shin's mother, intending to marry the dissident's mother as a counter-subversion measure in order to force Shin into compliance through family ties.

The Syrian author Nihad Siris has mastered the art of writing about life's weighty issues with a remarkably light hand. His novel Ali Hassan's Intrigue dances to a playful and wonderfully relaxed rhythm, even though it addresses a serious subject, namely life under a dictatorial regime.

"What can that mean," the protagonist asks himself, and it seems that he comes very close to the answer: it means nothing. There is no meaning to the slogans. But they are perfect for chanting in rhythm and sound good, at least to most ears.

Neatly arranged language, chanted in catchy and pithy form, is an end in itself. It has no need for meaning, serious messages, and manifestos. Ideology is out. Anything goes as long as it rhymes.

​​Born in 1950, Siris has a sharp eye for the absurdities of the total state, a trait he shares with Franz Kafka. Yet Siris, who now lives and works in his native city of Aleppo after spending several years in Bulgaria, has one particular advantage over the great modernist writer. Unlike Kafka, he is an exceptional humorist. In Siris' writing the dictatorship becomes grand farce.

Society is in constant flux, with all elements revolving around the almighty, the great dictator. Siris may well be picking up on the Latin American dictatorship novel here, which has a great tradition of highlighting how people cling to positions of power.

The system is permanently occupied with encouraging its citizens to join solidarity demonstrations with the Great Leader. The only quiet time is at night, when absolute silence reigns. Not going to bed early is a waste of energy, which could be devoted to the nation's leader. Staying up late instantly arouses suspicion.

"The people should not turn night into day. They are to go to bed early so that they may continue the construction of our homeland with eagerness and élan in the spirit of the Great Commander…"

Slapstick in the torture chamber

The secret service intrigue doesn't particularly impress Fathi Shin, meanwhile, and so our intrepid hero ends up in the dungeons of the regime, where he spends several hours finding out what the dictator has in store for those who don't want to do his will.

Again, Siris handles this actually very dark material with an admirable lightness of touch. Fathi Shin's appearance in the torture chamber becomes a comedy skit, while still doing justice to the subject matter. Even the darkest corners of the regime can be portrayed in slapstick, provided it is not the victims who are mocked but the torturers and those behind them.

The setting of the novel is never clearly identified. Nihad Siris may well have gained some of the impressions behind it in Syria, a country that followed a marked cult of personality at least until a few years ago. But other countries also come to mind, countries that when viewed as a whole resemble the kind of state where fear is all too familiar a sensation.

Siris' great mastery is in turning this fear into humorous capital and in writing a book in which even humour harbours its own horror.

END_OF_DOCUMENT_TOKEN_TO_BE_REPLACED
Social media
and networks
Subscribe to our
newsletter