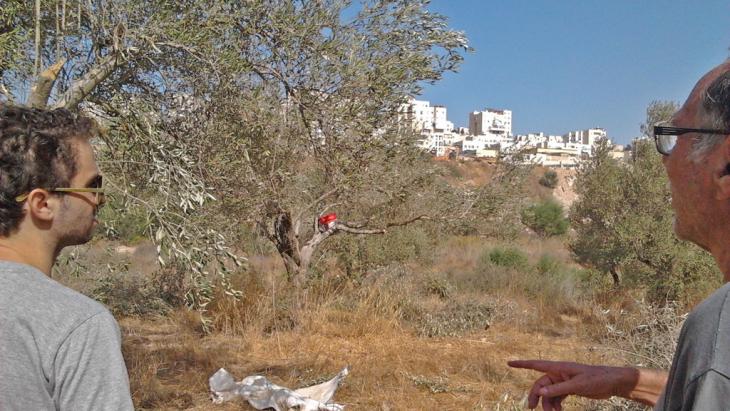 Nir Baram: ″In a land beyond the mountains″
Danger in the olive groves

In 2014 and 2015, Israeli author Nir Baram travelled through the occupied territories of the West Bank. Recently published in German as "Im Land der Verzweifelung", his latest book is the chronicle of that journey and of what he saw and heard among the refugees, settlers, Jews, Palestinians and activists living there. By Joseph Croitoru

That there is some imbalance in the treatment of the groups is evident from the fact that more than a third of Nir Baram's book "Im Land der Verzweifelung" (In a land beyond the mountains) is dedicated to the Jewish settlers, a group among whom a mood of unbridled optimism usually prevails. The author also gives just a little too much prominence at times to their redundant and well-known slogans on the biblical justification for their claims to the entire country.

The settlers′ self-justifying claims that life for the Palestinians is better under Israeli occupation than it ever could have been in an Arab country, is also not something we need to hear repeated over and over again. At times one has the impression that the author is more interested in examining his own prejudices against the Jewish settlers, than in rigorously questioning the consequences of their presence for the Palestinian population – his account of what he sees as a particularly liberal Talmud school in the Otniel settlement south of Hebron being just one example. It is a dichotomy that is very revealing of the ambivalent relationship that many centre-left Israelis have to the settlement work and also provides one explanation for why they tolerate it.

Ending the occupation is vital

The Palestinians, on the other hand, must go on enduring an occupation they have been hoping to see come to an end to for decades. Though responses to Baram's questions on how they see their future sometimes elicit apparent indifference on the one or two-state solution debate, with an end to occupation and the granting of full civil liberties seen as much more important, this is by no means a representative reflection of opinion. 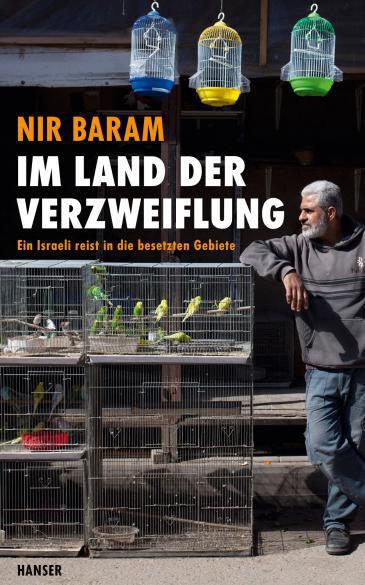 The Israeli newspaper "Haaretz" – one of the few publications still to report on the occupation of Palestinian land in the West Bank – commissioned author Nir Baram to write a series of articles in 2014/2015 on the situation there. These have now been published in book form and are recommended reading, if nothing for their rarity value

Those who say such things tend to do so from a sense of resignation in the face of the expanding presence of the Jewish settlers and the impunity with which they are allowed to terrorise their Arab neighbours.

Though Baram chooses to present anecdotes on good neighbourly co-existence as evidence for the ability of Jews and Arabs to live harmoniously alongside one another under Israeli occupation, these sorts of relationships, though eagerly described by some settlers, remain the exception.

A farmer from the village of Yanun, south of Nablus, who prefers to remain anonymous, most succinctly sums up the consequences of the increasing displacement of the Palestinians. From him we learn that the Jewish settlement of Itamar, which began with a single fenced-off house in the 1980s, now covers several hilltops – practically surrounding the Palestinian village. The settlers gradually took possession of the Palestinian pasture land before converting it to fodder cultivation.

The construction of outposts on surrounding hills signalled the beginning of attacks on the Palestinian farmers. The settlers not only uprooted numerous olive trees, but also poisoned an entire herd of cattle.

As time went by, it became ever more dangerous for the Palestinian farmer to set foot on his own land. The Israeli army even limited the amount of access he could have on the grounds that it was for his own safety.

Access to his olive trees is now limited to just a few days a year, his income has been cut by two-thirds as a result. Legal redress against the Jewish aggressors is hardly ever attempted by the local Palestinians because it is pointless, he says. Since it has now become very difficult for anyone here to make a living from agriculture, he also goes to work for Israeli Arabs in Galilee, though this is only possible with the aid of expensive people smugglers.

Another villager complains that the regular attacks by Jewish settlers are the reason why more and more young people are leaving, making it uncertain whether the village can even survive at all in the long term.

Given all of this, Nir Baram's descriptions of the meetings of a small Israeli-Palestinian dialogue group, of which he is a member, appear encouraging, insofar as they manage to avoid becoming lost in irrelevancies. The kinds of things that astonish the Israeli reporter are at times rather surprising: the fact that there are Palestinian children in Ramallah who have never set eyes on a Jew, for example; or that there are settlers who have neither paid a visit to their immediate Palestinian neighbours, nor have any intention of doing so.

Among Palestinians, particularly in areas where one comes face to face with Israelis and with the apparatus of occupation, the author encountered significantly more interest in the other side. This is probably owing to the fact that contact between Palestinians in the West Bank and their ethnic brothers in Israel has intensified in recent years.

What Baram fails to consider here, however, is whether this development has not been indirectly encouraged by the Israelis, who appear to be committed to preventing the emergence of a territorially contiguous, independent Palestinian state.

The fact that Baram admits in his preface to having become aware of the complexity of the occupation only through his travels in the West Bank and Gaza, means that he is not necessarily able to illustrate the workings of the power mechanisms that underlie it. This is another reason why his assessment that, given the reality of the occupation, implementation of the two-state solution now seems more unrealistic than ever, should be viewed with a degree of scepticism.

Her grandparents are Jews – born in Tunisia and Algeria. Director Cleo Cohen has now broken the silence about this with a very personal debut. By Nadine Wojcik END_OF_DOCUMENT_TOKEN_TO_BE_REPLACED

Every year in December, the team at Qantara.de takes a look back at the articles that proved most popular with our readers. This year is no different. Here is a run-down of the ... END_OF_DOCUMENT_TOKEN_TO_BE_REPLACED

Christmas in Bethlehem is usually a festive and colourful season. This year, festivities in the Palestinian town are set to return – but the COVID-19 pandemic is still casting a ... END_OF_DOCUMENT_TOKEN_TO_BE_REPLACED

Haifa is known for being Israel’s exemplary model of relative harmony between Jewish and Palestinian citizens. Its unique "Holiday of Holidays" is a joyous, multicultural event ... END_OF_DOCUMENT_TOKEN_TO_BE_REPLACED

May 2021 saw a deadly flare-up in Israel-Hamas hostilities, with eruptions of extreme violence in several of Israel's 'mixed' cities. Two weeks later, a broad-spectrum governing ... END_OF_DOCUMENT_TOKEN_TO_BE_REPLACED

Ankara is seeking to improve its relations with several states in the Middle East – such as the United Arab Emirates, Egypt and Israel. There are several reasons for this. ... END_OF_DOCUMENT_TOKEN_TO_BE_REPLACED
Author:
Joseph Croitoru
Date:
Mail:
Send via mail

END_OF_DOCUMENT_TOKEN_TO_BE_REPLACED
Social media
and networks
Subscribe to our
newsletter