No booze? No problem for most fans at World Cup in Qatar 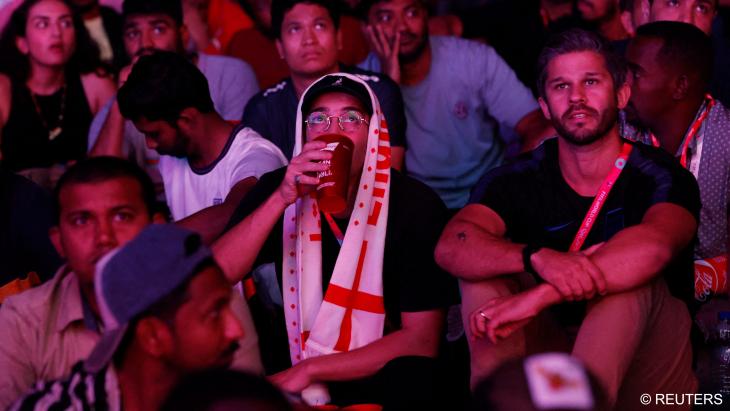 Football fans at the almost alcohol-free World Cup are ready to pay high prices for a beer, a few have tried to smuggle booze into stadiums, but most simply accept that drinking is off limits at the first tournament in a Muslim country.

World football governing body FIFA reversed course in mid-November, two days before the first match kicked off, and announced that no alcoholic beer would sold at stadiums in Qatar where it is an offence to drink alcohol or be drunk in public.

While beer is available at designated World Cup fan zones and in some hotels, the hassle and the cost of finding alcohol – half a litre is sold for 50 Qatari riyalis ($13.70) in fan zones – are simply too much for many supporters from countries where beer is typically part of the match-day routine.

"For me, it's tradition having a beer, watching a game, enjoying the game with friends," said Stefaan Pacquee, a Belgian doctor who travelled to Qatar from his home in Sydney, Australia, as he made his way into a stadium before Belgium's 2-0 defeat by Morocco on Sunday.

He said he had his first beer-and-football experience aged 16 with his father.

"So I miss it. And I don't think the Budweiser Zero is going to compensate for that. But hey, we're here, the weather's beautiful, it's a great atmosphere," Pacquee said.

Germany fan Christian Kopatsch said alcohol was often banned at matches in his home country that were considered to be at high risk of violence among supporters, so the largely dry World Cup was not a huge adjustment for him.

He said he noticed a change in the atmosphere where, apart from minor skirmishes between a few fans of Mexico and Argentina, there have been no reports of violence, in contrast to trouble that broke out in Belgium after Morocco's win and fighting between England and Wales fans in Tenerife, Spain.

"I think it's more peaceful. You don't have these very drunk people everywhere and people are simply normal and happy," Kopatsch said before Germany's 1-1 draw with Spain on Sunday.

He has not even tried to find a drink. "I can do without alcohol for a week," he said.

Not everyone is so accepting of the rules.

A video shared on Twitter showed security staff seizing what appeared to be a pair of binoculars turned into a secret booze bottle by a Mexico fan trying to get into his country's match against Argentina on Saturday, which Mexico lost 2-0.

One of the security officials is seen unscrewing one of the eye cups and simulating having a swig to show a colleague what he has discovered while the fan in a green, white and red wig seems to gesture that the contents are in fact hand wash.

But most supporters seem to understand that, for this tournament, old habits will have to be put on hold.

Spain fan Raimundo Oujo, a businessman from La Coruna, said the mood in the stadiums was a little less charged than usual as a result of the booze ban.

"It's a fact that we always celebrate with drinks before or after, so I think it can make a difference, but it's not a critical factor," he said.

"Let's celebrate some other way, or you can also celebrate when you come back home and then you can have a big party."    (Reuters)

More on this topic
Qatar 2022 and the Arab world: "It’s our World Cup"Qatar and FIFA World Cup 2022: The limits of liberalisationAlcohol consumption in Islamic countries: The devil's brew in great demand
Home
Print
Newsletter
MoreAll Topics

END_OF_DOCUMENT_TOKEN_TO_BE_REPLACED
Social media
and networks
Subscribe to our
newsletter