Should the international community intervene in Libya? And if so, on what basis could a no-fly zone be imposed? Opponents of the idea fear the situation could further descend into an unmanageable war. Background report by Andreas Zumach 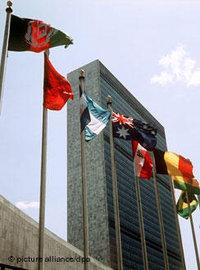 The UN Security Council does not agree over a no-fly zone for Libya. Russia and China would likely vote against. NATO is biding its time at present

​​For more than two weeks now, feverish debate has been taking place over whether a no-fly zone can be established over Libya. The first to introduce the idea to the table was UN High Commissioner for Human Rights Navi Pillay, in Geneva.

As Pillay explained on 23 February, if reports of air attacks on civilians turn out to be true, the establishment of a no-fly zone is necessary for the immediate protection of the Libyan population. Since then, Colonel Gaddafi's air force has stepped up its attacks – not just on armed resistance fighters, but also on civilians. However, a decision is not expected in the foreseeable future.

Considerations concerning international law, politics and practical matters prevail. Only a UN Security Council decision can provide the necessary international mandate for the establishment of a no-fly zone – something all participants in the public debate have stressed without exception – at least up to now.

The special case of civil war

It is not only the two permanent veto-holding powers Russia and China that have expressed concern over the no-fly zone. Western international law specialists have also voiced fundamental misgivings over any infringement of the sovereignty of UN member nation Libya.

In an interview with the Berlin daily newspaper "die tageszeitung" in late February, the renowned German expert in constitutional law Reinhard Merkel said that a "kind of civil war is taking place in Libya, and in the case of a civil war, under international law there is basically no right to intervene." 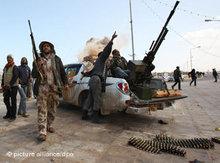 Under political and military pressure: Rebels in eastern Libya are calling on the international community to immediately establish a no-fly zone to protect them against air strikes by forces loyal to Gaddafi

​​Merkel is an avowed critic of NATO's war in Kosovo in 1999, because it was conducted without the necessary mandate from the UN Security Council. Now he stressed that a military intervention in Libya would only be possible if the Security Council declared that the conflict there represented a threat to world peace. But the situation in Libya is far from that at present. And "even further away from what is in any case a controversial threshold for a genuine humanitarian intervention," he said.

The controversial intervention threshold is a reference to the international community's "responsibility to protect", a responsibility that arises when a government is not willing or able to protect its own citizens against genocide, war crimes or crimes against humanity.

The "responsibility to protect" principle was agreed by all 175 heads of state present at the UN summit in New York in 2005. But to this day, it is not binding in international law. 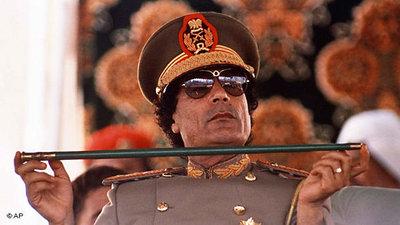 Taking a hard line with his own people: As well as attacks on military targets in the east of the country, Libya's long-time dictator has also ordered forces to open fire on peaceful demonstrators

​​Supporters of a no-fly zone, on the other hand, believe that the necessary criteria for honouring this responsibility to protect have already been met in Libya. In its unanimously agreed resolution on Libya of 26 February, even the UN Security Council – with the votes of Russia and China – declared that the violent acts perpetrated by the Gaddafi regime up to that point, resulting in more than 1,000 deaths "may amount to crimes against humanity".

The Council also referred Libya to the International Criminal Court (ICC), thereby ordering it to issue arrest warrants for Gaddafi and members of his regime. This has in the meantime been initiated.

The international legal dilemma persists, and a clear resolution looks unlikely at this point. Only limited clarification is provided by the two historic precedents Bosnia and Iraq. In 1993, the UN Security Council approved a no-fly zone over Bosnia-Herzegovina to prevent further attacks by Serbian fighter jets on civilian targets. When the Serbs disregarded the no-fly zone, the Council authorised NATO to shoot down the jets. 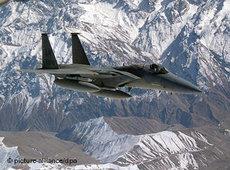 After the end of the second Gulf War in early 1991, the UN Security Council's three western veto powers, the US, Britain and France, agreed to impose a no-fly zone – initially over northern Iraq, and later over the south of the country

​​In the case of Iraq, there was no UN Security Council resolution. After the end of the second Gulf War in early 1991, the Council's three western veto powers, the US, Britain and France, agreed to impose a no-fly zone – initially over northern Iraq, and later over the south of the country.

These measures were justified as providing protection for Kurdish and Shiite minorities against the regime of Saddam Hussein. But because the US and Britain increasingly used both no-fly zones to fly spy missions and conduct air attacks on targets in central Iraq around Baghdad, France withdrew its support in 1994.

In the case of Libya too, it cannot be ruled out that the three western powers as well as other NATO countries may decide to act without the backing of a UN Security Council resolution. Harsh rhetoric from the British government in particular indicates it may be ready to do just this.

But in view of how the debate has progressed to date, such a scenario still seems improbable. Concerns among political elites and the military leadership of the US – NATO's supreme power – are simply too large, and extend across the political spectrum.

The establishment of a no-fly zone effectively "means war", said US Defence Minister Robert Gates. This is because it initially requires the elimination of Libyan air defences and moreover, the possible shooting down of Libyan fighter jets. 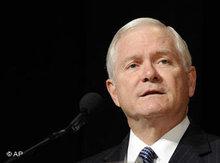 ​​US military superiority would enable it to take such a step single-handedly without the participation of NATO allies, in an emergency, if necessary. But Washington is presently showing little enthusiasm for another armed conflict with an uncertain outcome, while it is already involved in ongoing "military engagement" in Afghanistan and Iraq.

Sceptics argue that the war against Iraq in early 2003 and the ensuing mission involving more than 500,000 US occupation troops can trace its origins back to the no-fly zones imposed over northern and southern Iraq in 1991.

They also claim that the establishment of a no-fly zone over Bosnia-Herzegovina marked the start of a US engagement that resulted in the five-year stationing of more than 30,000 US soldiers (as part of the UN-mandated and NATO-led IFOR and SFOR troops).

Another reason for the reluctance, not just in Washington but also in Berlin, Paris and other western capitals, is a fear that the establishment of a no-fly zone will provide Gaddafi with more ammunition to back up his theory of a "western conspiracy" against Libya. Especially a no-fly zone – regardless of whether it comes with or without a Security Council mandate – operatively imposed by the air forces of individual or all NATO states. It is a fear backed up by experience to date of international military missions since the end of the Cold War.

The "western conspiracy" theory could not only find support in sections of the Libyan population, but also in other Arab and Islamic nations.

To date, the "National Council" of liberated cities in eastern Libya has spoken out in favour. Among the 22 nations of the Arab League, which was still expressing majority support against the proposal last week, Bahrain and Oman have in the meantime issued public calls for a no-fly zone. The Secretary General of the 57-nation Organisation of the Islamic Conference (OIC) has also spoken out in favour.

All the aforementioned supporters did however at the same time express their firm opposition to a "military intervention". This rather contradictory stance is borne of the concern that following the imposition of a no-fly zone initially offering humanitarian protection for Libyan civilians, this could eventually result in a NATO invasion of Libya and an occupation of oil fields.

This worry is by no means completely unfounded. NATO military leaders in Brussels have for a long while been weighing up these scenarios, as well as the possibility of offering active air support to opposition forces by the bombardment of Libyan tanks, for example.

And in the meantime, NATO countries have been gathering comprehensive marine, air and land invasion forces close to the Libyan coastline and would be operatively speaking ready to activate any of the aforementioned scenarios at any time.

Arabic Despots
Like Father, Like Son
Arabs have known for years that their rulers were beyond reform. That is why, in order to have a chance to catch up with the rest of the free, developed world, many of them are now risking their lives to remove those regimes. By Omar Ashour

The Libyan Opposition against Gaddafi
All Power to the Tribes
The opposition movement that emerged from Benghazi has entirely changed the role and appearance of the opposition. The exile opposition, which once spoke for the Libyan people in the cities of the world and set the tone, has become insignificant overnight. An analysis by Hanspeter Mattes

END_OF_DOCUMENT_TOKEN_TO_BE_REPLACED
Social media
and networks
Subscribe to our
newsletter