As it seeks to support "stability" in North Africa, the international community needs to think less about strong states and more about strong opposition, says Max Gallien

"Investing in Stability" is the title of the final declaration of this weekʹs summit between the Arab League and the European Union. For years, stability in North Africa has been a dominant policy goal of the international community, driven by concerns about migration, terror and weakened states on Europeʹs doorstep.

Efforts to buttress stability have been at the heart of development assistance, security programmes and widespread diplomatic silence over deteriorating human rights. However, foreign policy approaches on North Africa often suffer from a misunderstanding of what stability means in the region – and risk actively undermining it.

The common assumption is that stability in North Africa means a region of governments that are capable of maintaining the status quo. The region, however, is undergoing huge demographic and economic transitions.

The social contracts of the post-independence era are slowly collapsing and the support base provided by the traditional elites is shrinking. Change is coming, one way or the other – expanding protest movements across the region provide ample evidence of broader pressures.

In these times, a stable North Africa cannot mean retaining the status quo at all costs; instead, it should mean that the region is institutionally capable of managing change. To accomplish this, the primary deficit that must be addressed in most North African states is not stronger governments, but stronger opposition. 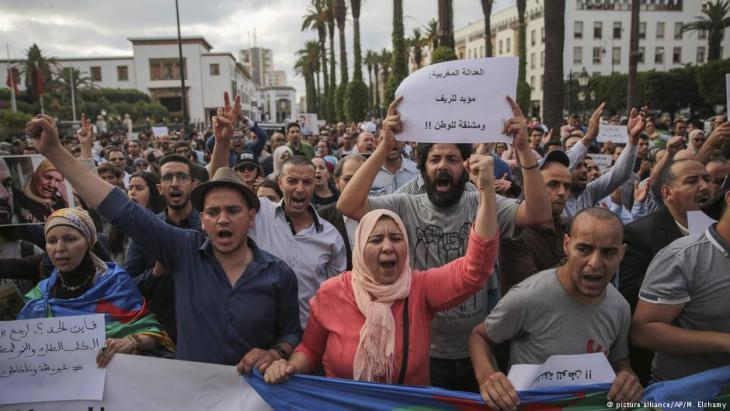 Protesting unfair convictions: hundreds of people marched through the streets of Rabat on 29.06.2018 to demonstrate against the harsh prison sentences imposed by a court in Casablanca on human rights activists from the province of Al-Hoceima. Nasser Zefzafi, the leader of the "Hirak" movement, which mainly promotes the development of the Rif region in the north of the country, was sentenced to 20 years in prison, along with three other activists

The state lacks an opposition

Morocco provides a prime example. For years, the monarchy has marketed itself internationally as a strong partner and an island of stability in a troubled region.

Domestically, it has successfully co-opted or repressed any opposition movements that have emerged to challenge the palaceʹs authority. But crushing the opposition has not weakened the drivers of resistance – uneven development, police violence, crony capitalism and corruption have alienated many Moroccans from their government.

In the last 12 months, protests have flared in economically marginalised regions such as the Rif and Jerada. Campaigns for womenʹs rights and against rising costs of living have percolated on social media and slogans against inequality and repression can be heard from football stadiums to the countryʹs beaches.

However, as protest movements have evolved to become harder to subdue, they have also become more diffuse, leaderless and, as a result, harder to negotiate with.

An example of this is the nation-wide boycott – organised through social media – against three companies that are seen as engaging in corruption and profiteering. Although its lack of an identifiable leadership structure has allowed the boycott movement to mobilise widely – as it has been impossible to arrest its leadership – it has also made it impossible to elaborate its demands and negotiate its end.

Herein lies the real danger to the countryʹs stability: even as Moroccoʹs current social contract is in serious need of re-negotiation, there is no player left in the countryʹs political system who can credibly represent those alienated from the current system and help sell a negotiated change.

The coronavirus pandemic brought mass pro-democracy protests in Algeria to an abrupt end. Exploiting the distraction engendered by the health crisis, the new Algerian government ... END_OF_DOCUMENT_TOKEN_TO_BE_REPLACED

Algeria has not found peace since Abdelaziz Bouteflika, who was president for 20 years, resigned under massive public pressure in April 2019. On 1 November 2020, the government ... END_OF_DOCUMENT_TOKEN_TO_BE_REPLACED

Ten years after the start of the Arabellion in North Africa and the Middle East, many view the movement as a failure. But rather than being over, it has now entered a more mature ... END_OF_DOCUMENT_TOKEN_TO_BE_REPLACED

Algeria's recent referendum was a thinly veiled attempt to hijack the agenda of the country's popular Hirak protest movement. Yet the people are no longer willing to accept ageing ... END_OF_DOCUMENT_TOKEN_TO_BE_REPLACED

Now that the COVID-19 crisis in Algeria has eased significantly, Algerian authorities are once again cracking down on migrants with extreme severity, expelling thousands of people ... END_OF_DOCUMENT_TOKEN_TO_BE_REPLACED

END_OF_DOCUMENT_TOKEN_TO_BE_REPLACED
Social media
and networks
Subscribe to our
newsletter