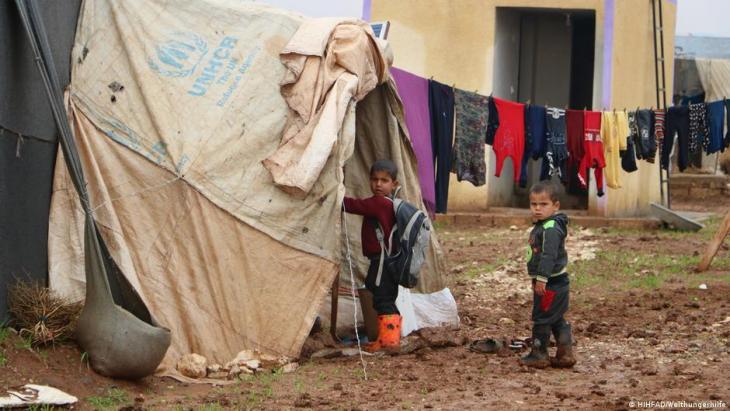 Millions of people in Syria's Idlib region depend on foreign aid that passes through only one border crossing. The UN mandate regulating passage through it will expire on 10 July; a humanitarian disaster looms if it isn't renewed. Diana Hodali reports

The Syrian city of Idlib is separated from the Bab al-Hawa crossing at the Turkish border by about 40 kilometres. Huda Khayti, director of the Women Support and Empowerment Center Idlib, travels there several times each week to check on people in refugee camps along the border and bring them aid. Millions of internally displaced Syrians have been living there under extremely difficult humanitarian circumstances for years, and Khayti is worried about their fate.

"These people are extremely dependent on aid," she explained by phone. "They don't have a voice. The world doesn't see them. If the assistance stops, they will quietly begin dying – either from starvation or illness."

The threat that aid could be cut off is real. The UN mandate that is the foundation for all aid delivery in the region of Idlib is about to expire. In 2014, the UN Security Council passed a resolution to open four border crossings into northwest Syria to supply essential aid to people living in the country's last rebel stronghold. 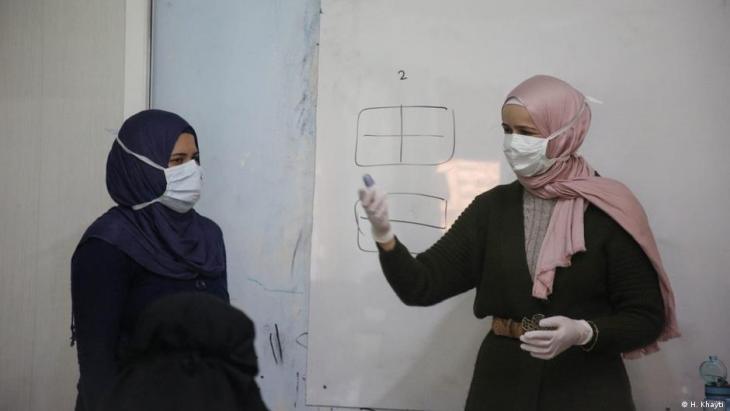 Since 2018, Huda Khayti (right) has been running the women's centre in Idlib. She travels there several times each week to check on people in refugee camps along the border and bring them aid. Millions of internally displaced Syrians have been living there under extremely difficult humanitarian circumstances for years, and Khayti is worried about their fate. "These people are extremely dependent on aid," she explained by phone. "They don't have a voice. The world doesn't see them. If the assistance stops, they will quietly begin dying – either from starvation or illness"

But the mandate must be renewed each year, and Syria and its closest ally, Russia – which has veto power on the Security Council – have increasingly objected. In 2020, negotiations produced a tediously achieved compromise that closed all but one crossing: Bab al-Hawa, about 50 kilometres west of Aleppo. But the mandate for that crossing is set to expire on 10 July.

Various estimates put the number of people living in Idlib at about 4 million, with more than a million of them in refugee camps. Many have repeatedly been forced to flee within Syria. In the time since the Security Council passed its resolution, it has become increasingly difficult for aid organisations to deliver food and medicine to people in the region. According to the United Nations, about 1,000 truckloads of aid roll through the Bab al-Hawa border crossing each month.

Human Rights Watch (HRW) estimates that about three-quarters of Idlib's 4 million inhabitants depend on humanitarian assistance. Only three hospitals are currently operational in Idlib, and COVID-19 infections are rising. The region has so far received very few vaccine doses, and both HRW and the UN fear the worst should the Bab al-Hawa crossing be closed.

"If the aid doesn't come this will end in a true humanitarian disaster, because then medicine won't come," Khayti said. "We are being bombed. How are we supposed to treat the wounded, the sick, those infected with COVID-19? How can our humanitarian assistance be up for debate?"

For weeks, Syrian President Bashar Assad and his Russian backers have been stepping up attacks in southern parts of the province — especially the area around Jabal Zawiya — despite an official cease-fire.

At a Security Council meeting in late May, Russia indicated it was unlikely to agree to an extension of the mandate to keep the border open. U.S. Secretary of State Antony Blinken, on the other hand, urged the opening of a second border crossing to allow for more aid to reach the last rebel stronghold. 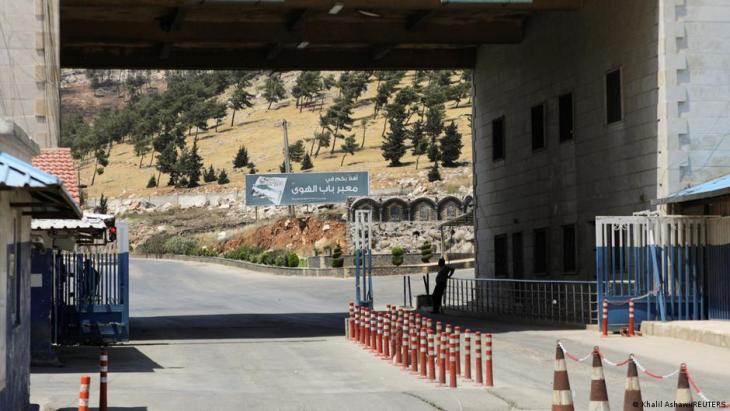 Border crossing at Bab al Hawa: this is the only place where humanitarian aid is currently still reaching Idlib province via Turkey. The UN mandate, which is the basis for aid deliveries to the region, expires on 10 July. Russia has already signalled that it is unlikely to extend the UN mandate: "If the aid doesn't come this will end in a true humanitarian disaster, because then medicine won't come," Khayti said. "We are being bombed. How are we supposed to treat the wounded, the sick, those infected with COVID-19? How can our humanitarian assistance be up for debate?"

"The discussion about the one checkpoint is the bare minimum," said Till Kuster, Middle East coordinator for the aid organisation Medico International. "In reality, we should actually be re-opening more checkpoints."

Medico International supports the women's centre run by Khayti, and sends materials to refugee camps to help slow the spread of the coronavirus. Independent organisations such as Medico are also using unofficial routes to transport their aid to Idlib, Kuster said. But that means they must forgo UN security and customs exemptions.

"If fewer and fewer goods enter the country, prices here will explode," Khayti said. Thanks to the devaluation of the Syrian currency, prices for food, fuel and other essential goods have already skyrocketed.

In principle, the United Nations can only be active in a member country with the consent of the government. As Assad's protecting power, Russia has long urged that all aid go through Damascus. "Russia is playing power games with the West," said Bente Scheller, a Syria expert at the Heinrich Boll Foundation in Berlin. The regime, which only provides aid to populations loyal to Assad, would gain further leverage by closing the Bab al-Hawa crossing. The move could help it to recapture the last rebel stronghold by increasing pressure on the local population.

It's not just Assad who would benefit from the closure of the Bab al-Hawa border crossing. "It would also enhance Turkey's role," Scheller said. "It would then be in Turkey's hands how much aid it wants to allow in the first place – and to whom it goes. Humanitarian interests play only an indirect role here: when Turkey allows aid deliveries, it's to prevent even more people from fleeing Syria to Turkey."

Khayti has been running the women's centre in Idlib since spring 2018. She came to the area when the democratic opposition and rebel groups alike were brought to the province, which is controlled by the militant Islamist group Hayat Tahrir al-Sham (HTS), among others.

"I experienced in Ghouta what it means when the regime starves people. They sealed off everything at that time and didn't let anything or anyone into the city. It was almost worse than the bombs we had to endure," she said. "I don't want to experience that again. It's a terrible feeling, and it scares me that this is what we are facing."

Khayti is afraid that people will be forced to flee once again. But, with most of Syria not an option and Turkey keeping its border shut, there are few alternatives. "What do you expect from 4 million people? That we sit here and wait for our deaths?" she said. "The international community only acts when a disaster is already underway, or over. We want you to know that we need help now."

The disappearance of Razan Zeitouneh and her colleagues has been one of the greatest mysteries of the Syrian war – until today. DW's investigative unit hunted clues across six ... END_OF_DOCUMENT_TOKEN_TO_BE_REPLACED

By stage-managing his re-election in a poll widely dismissed as a farce, Syria's President Bashar al-Assad has killed two birds with one stone: he has forced his compatriots to ... END_OF_DOCUMENT_TOKEN_TO_BE_REPLACED

Although a unity government was formed in Libya in March 2021, tensions and possible crises between the political actors are already emerging. What problems does the country face ... END_OF_DOCUMENT_TOKEN_TO_BE_REPLACED

Syria's president appears to have triumphed. He remains in power, the Syrian conflict is nearly over, and efforts are underway in the Arab world to normalise relations with his ... END_OF_DOCUMENT_TOKEN_TO_BE_REPLACED

The neo-Ottomanism propagated by Erdogan has long been more than rhetoric and symbolic politics. This can be seen from recent developments in parts of northern Syria, where Turkey ... END_OF_DOCUMENT_TOKEN_TO_BE_REPLACED
Author:
Diana Hodali
Date:
Mail:
Send via mail

END_OF_DOCUMENT_TOKEN_TO_BE_REPLACED
Social media
and networks
Subscribe to our
newsletter