The Nubians, inhabiting a 700 mile stretch of Nilotic villages between Egypt and Sudan since the days of the Pharaohs, have been around for the most of Egypt's long history. Until the construction of the High Dam in 1964, their lives were determined by the ebb and flow of this ancient river. Subsequently some 50,000 Nubians from 45 towns were forcibly relocated to ″New Nubia″, a vast concrete housing development far from any arable land. This catastrophic loss of land heightened the already common migratory trend of men going abroad for employment and changed the community for good. Text and photos by Maya Hautefeuille 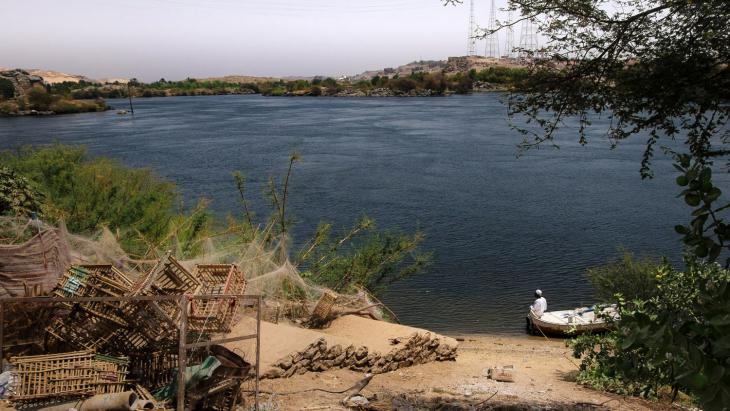 Slightly north of the High Dam, West Suheil is a Nubian village that was not submerged by flooding from the ever-rising reservoirs built by the state. Towns like this have become tourist destinations as a window into a ″pristine Nubian past″ 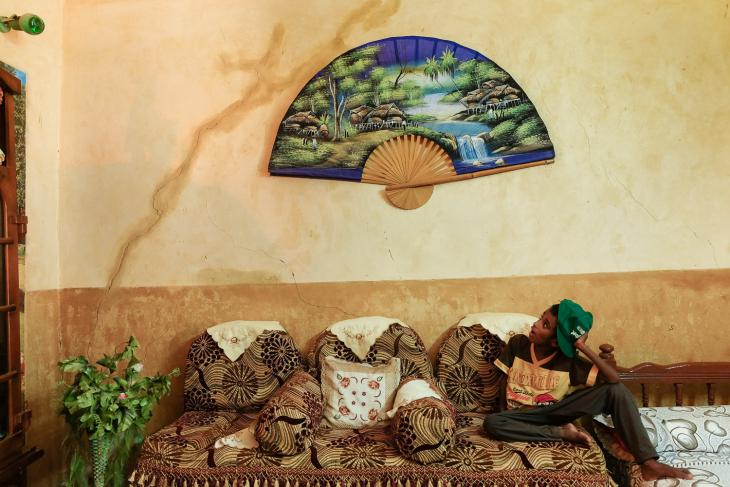 Images of the Nile River homeland adorns the walls of displaced Nubian homes, an icon of an idealised heritage and symbolic of the right to return. ″We should always be able to see the Nile″ is a phrase you hear often 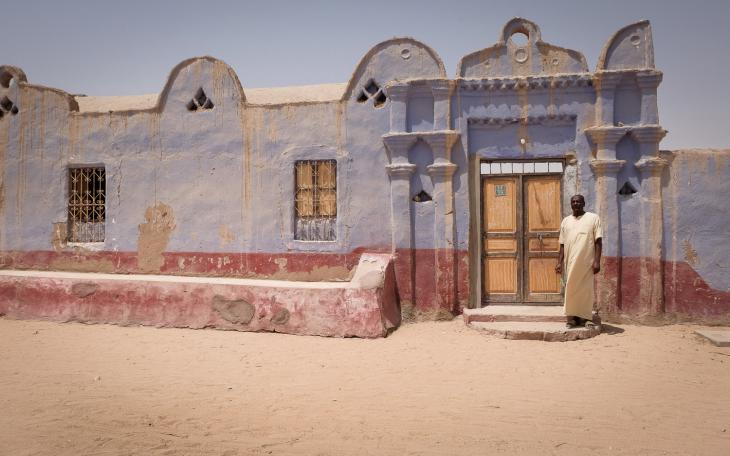 A Nubian poet stands in front of a traditional Nubian house in West Aswan. Men can often be heard saying, ″We hated Mubarak but we miss his times″: post-Revolution instability has brought dire economic consequences to Egypt, hitting the tourist sector especially hard 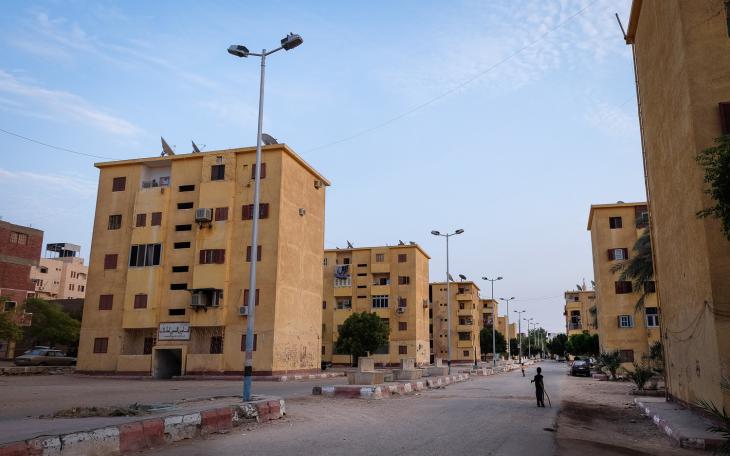 ″New Nubia″, the housing estate to which Nubians were relocated following construction of the High Dam in 1964. A high-rise development, it's located in an arid desert far away from the Nile that was the focus of Nubian life 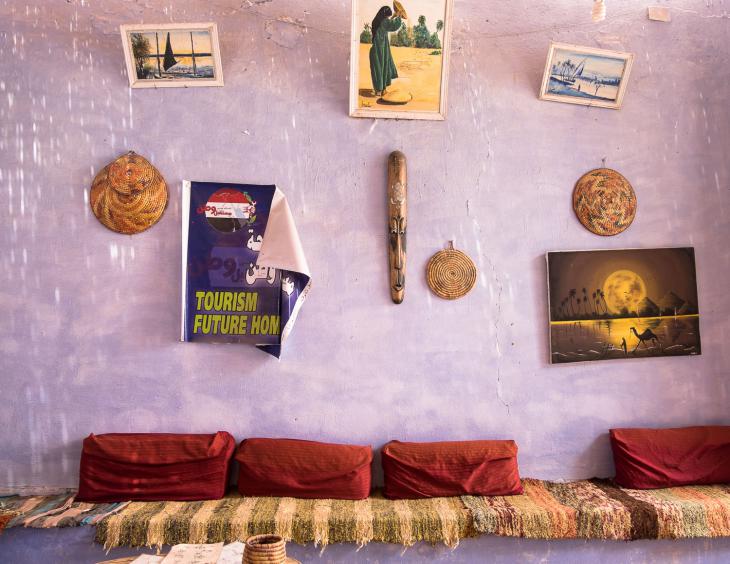 Tourism-related posters in a cafe in the Nubian village of Western Suheil: after the construction of the High Dam, there was an upsurge in interest in Nubia and its many temples. Aswan's tourism sector enjoyed an enduring boom, with many villagers coming to rely on it economically. Tourist numbers have plummeted as a result of Egypt's post-revolution instability 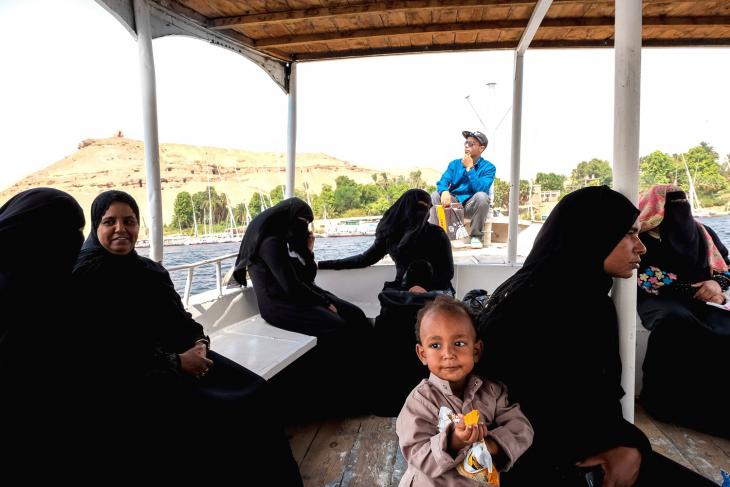 Women travelling to West Aswan on a river taxi. Aswan is southern Egypt's major city – and an important hub of economic and tourist activity for Nubia. On the west bank, called West Aswan, life is much more village-oriented and most commute daily to Aswan for work and study 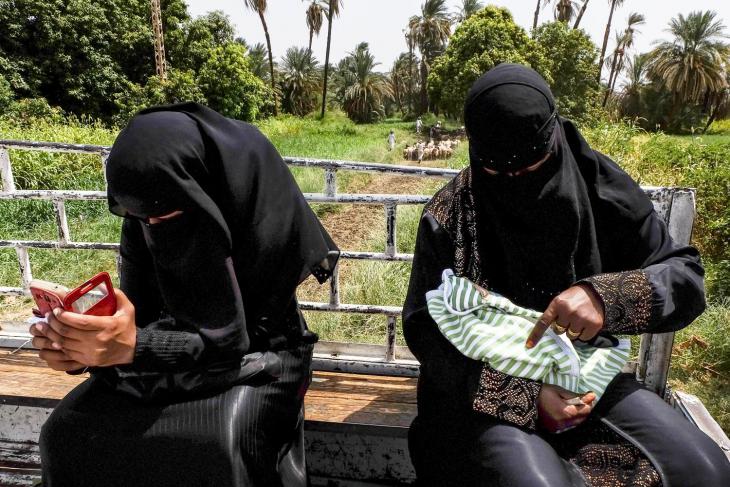 West Suheili women, one on the phone and the other cradling her newborn, commute on the local form of pick-up trucks that serves as public transport. Traditionally Nubian women wore the kumikol (black covering over the gallabeyya) and tarha (headscarf), yet more conservative dress influences are introduced by men returning from migrant work in the Gulf 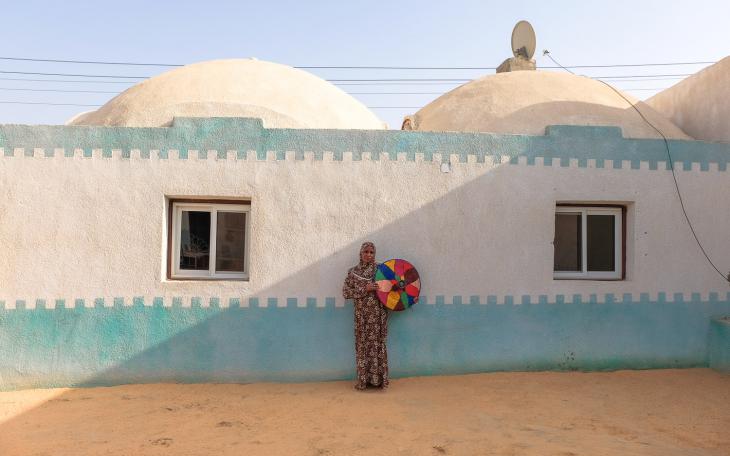 A woman from West Aswan stands in front of the new extension made to her house, a living room for guests now complete with a wide-screen TV set, air-conditioning and ample sofas. ″The custom of 'building the house' by Nubian women is a symbolic statement of the contributions of women to the village... it reaffirms the importance of their domain.″ (Jennings, Nubian Women of West Aswan, 2009). She is holding up a ″tegiddy″ – an embroidered food cover – that she has made from date palm stalks 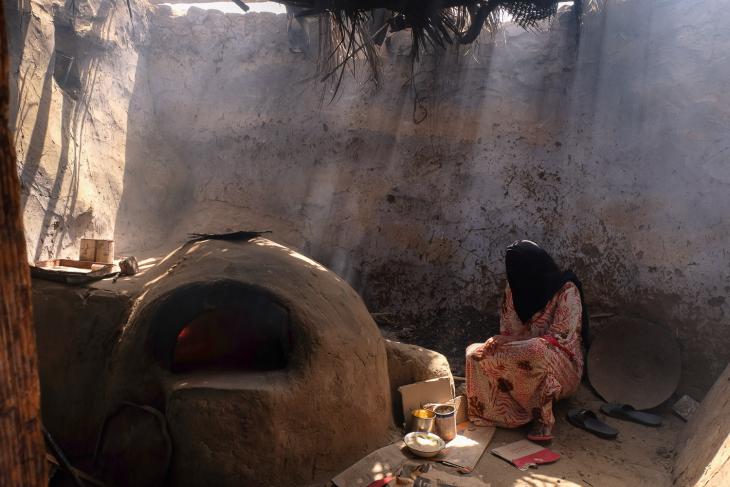 At the height of the wedding season between Eid ul-Fitr and Eid ul-Adha, a woman on Suheil Island bakes loaves of bread in her communal outdoor kitchen in preparation for a henna party 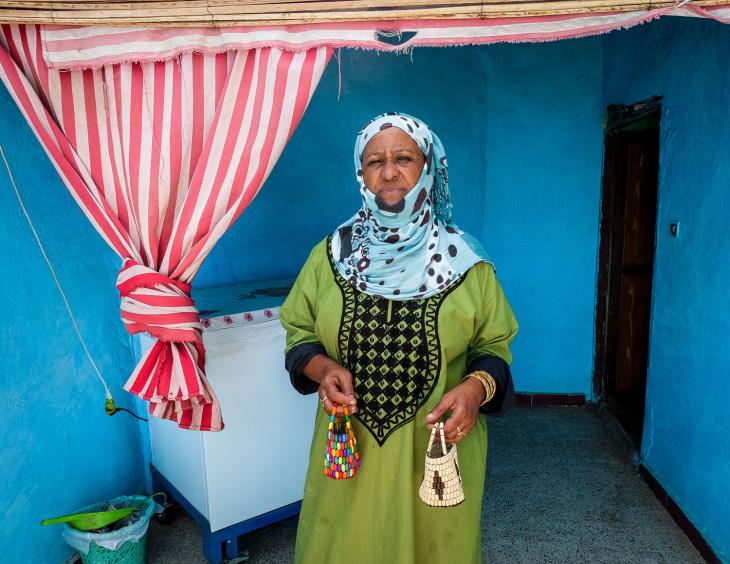 A woman on Suheil Island holds up the baskets she has been making for tourists for over 20 years. In better times, she would welcome tourist groups into her home, offer tea and food, and sell her baskets and jewellery. With the decline of tourism to Aswan, women like this have been losing their access to money-making opportunities and their source of personal income, formerly a means of reinforcing gender parity in the village 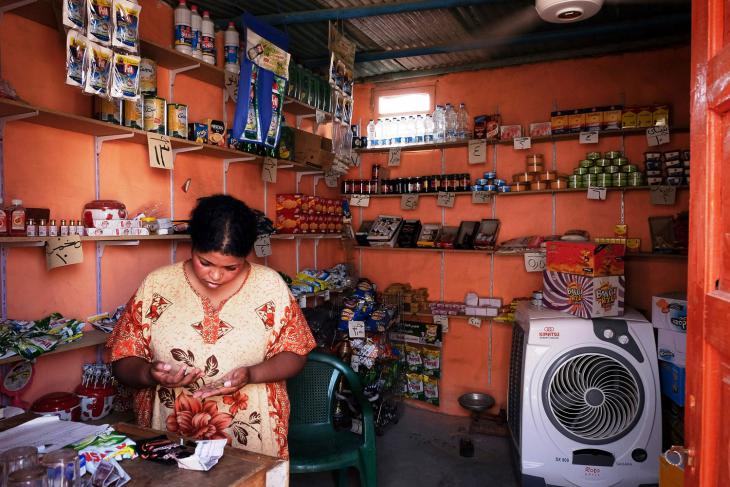 With tourism revenue drying up, women have started looking for work in other areas, like this shopkeeper running one of the only corner shops on the island of Suheil 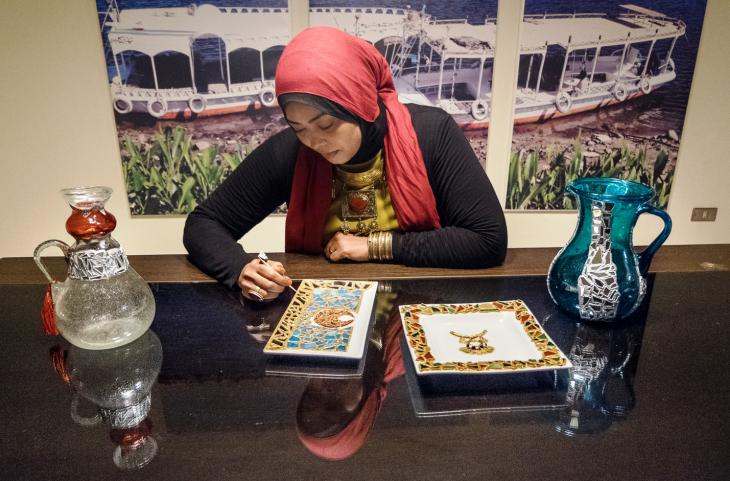 From her home in Cairo, Nubian artist Saly Sayed works on contemporary decorative and art pieces inspired by Nubian and Islamic heritage. The art is mainly exhibited and sold in exclusive galleries in Cairo and Europe 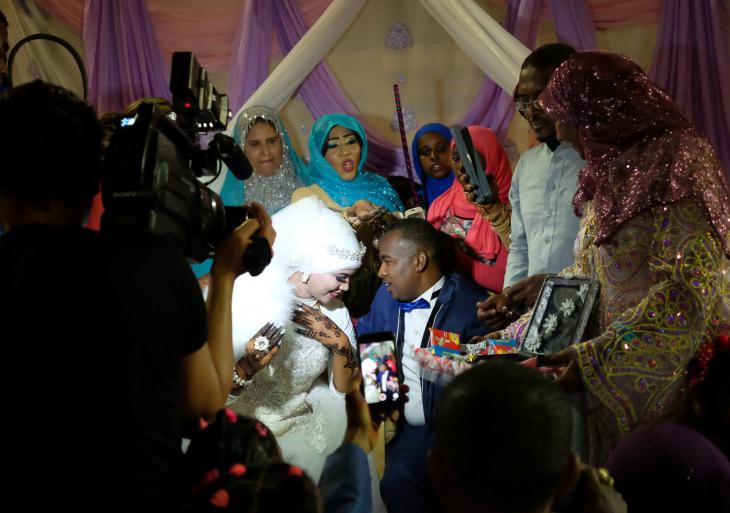 Among Nubian women, gold is a major status symbol and an indicator of wealth. On her wedding night, this bride receives an abundant amount of gold earrings, pendants and bracelets. Ideally, the most amount of gold should come from the groom's family. Gold is the most prized object of exchange in Nubia, which itself is derived from the ancient word ″nebu″ meaning gold 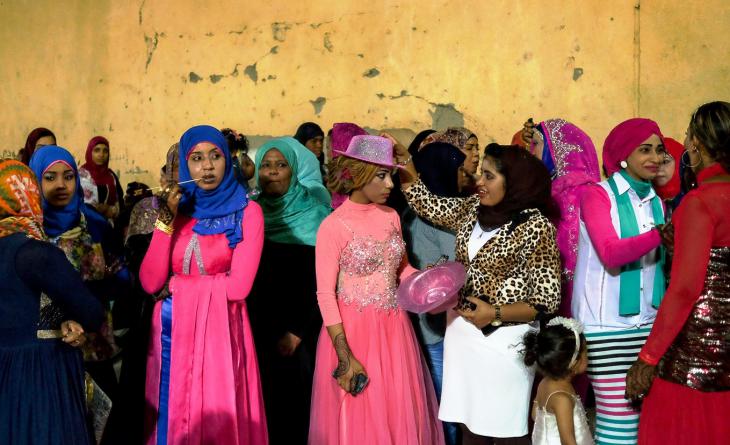 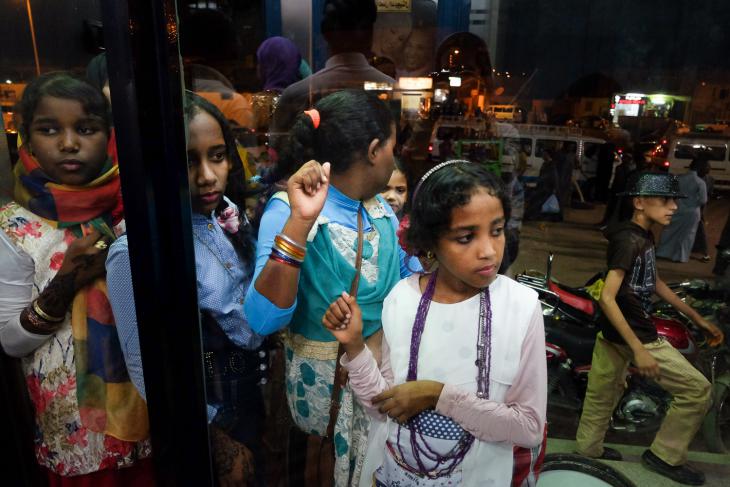 Nubian culture has always been exposed to exterior influences, from its Pharaonic origins through multiple foreign conquests and exchanges. Yet it has endured despite official attempts to assimilate Nubians into a single Egyptian identity and denigrate the value of their language and culture. These teenagers - more in contact with mainstream Egyptian culture - are presiding over a shift in cultural outlook and attitude 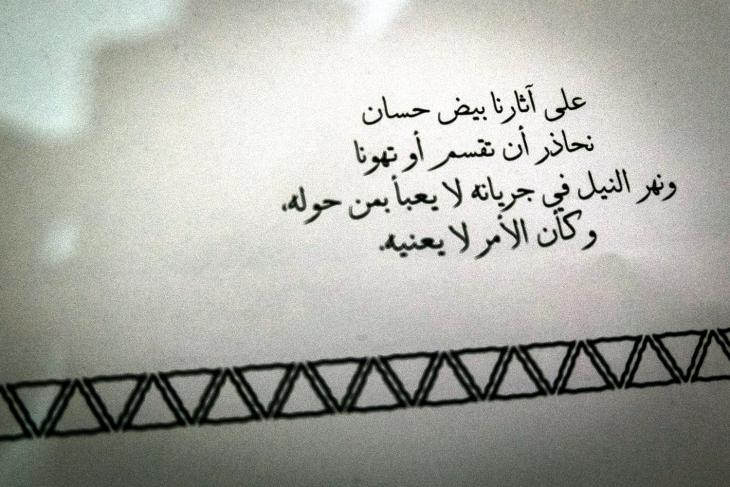 ''Our tributes are full of fairness and beauty / Take heed that it is not segregated or lost / Yet the River Nile carries on unheedingly / As if to the Nile, it matters not.'' - An unknown Nubian poet

END_OF_DOCUMENT_TOKEN_TO_BE_REPLACED
Social media
and networks
Subscribe to our
newsletter