Along with his students at the University of Haifa, the clinical psychologist Ofer Grosbard compiled a collection of advice for bringing up children from Koranic verses. Hisham Adem talked to the Israeli lecturer about the practical pedagogy of the holy book 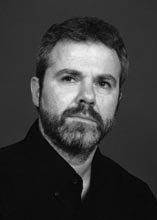 "This book was given to all of humanity." The Israeli Ofer Grosbard searched the Koran for educational guidelines - and found them

​​How did you come up with the idea for "Quranet"?

Ofer Grosbard: The project was an idea and initiative of one of my Bedouin students, Bushra. Last year a group of fifteen Bedouin students studying for graduate degrees in educational counseling attended a course in Developmental Psychology given by me. One day Bushra came up to me and said, "May I tell you the truth? What you are teaching us is not going to be of help to us." "Why do you say that?" I asked her.

Bushra said that when she becomes an educational counselor, a parent may come to her and say, "A demon has entered my child" or something similar. "Do you think that what you have taught us here will be of any use to me then?" "What would he helpful to you?" I asked her. She replied with one word, "The Koran." I asked her to explain. She said that, in the appropriate context, the quotation of a verse from the Koran has enormous impact on Muslims.

I brought a copy of the Koran to our next lesson. I divided the chapters among the students and asked them to locate the educational-therapeutic verses. There are many of these verses in the Koran, exhorting individuals to take responsibility, learn the truth, respect others, etc. I also asked them to write a brief story from everyday life for each verse to illustrate how a parent or teacher can utilize the verse to convey a message to the child. Together we collected more than three hundred stories, and I added a simple, brief educational-psychological explanation to each one. That was how Quranet came into being.

Which language did you choose? 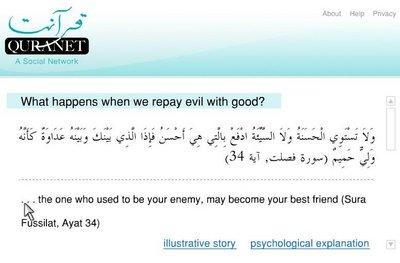 "What happens when we repay evil with good?" Quranet provides interactive content with brief, simple explanations. However, the project is not yet ready to go online

​​Grosbard: The material has been developed in Hebrew, with an introduction by three distinguished sheikhs. It was recently published in book form by the Ben-Gurion University Publishing House.

How exactly does Quranet work?

Grosbard: The user selects a particular issue from the list of contents and receives the relevant Koran verse. He or she can then study a brief description of an everyday event illustrating how the verse can be utilized to convey a message to the child. The session concludes with a brief educational-psychological explanation of the process.

What are the main goals of Quranet?

Grosbard: Quranet transforms the Koran into a unique and useful educational tool for parents and teachers, making the beneficial power of the Koran widely accessible. It combines the Koran with a modern educational approach in an unprecedented fashion. Moreover, Quranet reveals the beauty of the Koran and its respect for human dignity, providing a resounding response to those who exploit the Koran to justify terrorism.

You said that one of the ideas of this project is to use the Koran as an educational tool. What exactly does that mean, particularly in terms of fighting radical Islamism?

Grosbard: I am a Jew, and, although I taught my students psychology, they taught me about the Koran, which I had not known before. They showed me its beauty and the way it deals so well with human relations. The essence of the Koran is actually human relations and human dignity – the opposite of terrorism. We used it to show parents and teachers what love means in the Koran.

Did you cooperate with Islamic theologians? 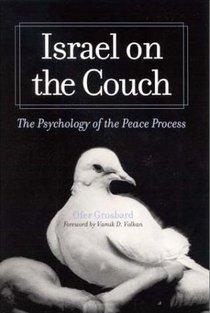 According to Ofer Grosbard, the players in the Mideast conflict are basically misunderstood children. His book "Israel on the couch" can be read on "Google Books" (see link below)

​​I emphasize this because we received many responses from the Arab world that talked about conspiracy and our presuming to interpret the Koran without actually reading the material – because the book is in Hebrew, and they only saw the website. After we finished our work, we presented it to well-known sheiks in Israel, England, and India and got wonderful feedback.

The project has caused apprehension among Islamic circles inside and outside Israel. They consider it Israeli propaganda and a means of manipulating the Koran to suit the interests of Israel.

Grosbard: First of all, the initiative came from Bedouin students, who did most of the work under my guidance, and it did not have any connection to the State of Israel. I know that in nondemocratic countries it may be difficult for people to believe that not everything is political and dictated by the government.

It is true that the State of Israel is proud of this project, which presents the beauty of the Koran. Why not? Muslims also believe that the Koran was given to all humanity. Is it forbidden that I, as a Jew, for example, study it? I would like to encourage everyone who feels that way to read the material I sent and make an honest judgment – then they will have the right answer. This project is a product of love, not conspiracy.

Do you think your project will be able to establish a bridge between the Islamic world and the West?

Grosbard: For Muslims, the Koran is a bridge between the Islamic and the western way of thinking. Non-Muslims may discover the beauty of the Koran. That's actually what happened to me. The Koran built a beautiful bridge of love between me and my students. They showed me the beauty of their culture, something I will never forget.

Ofer Grosbard, born in Israel in 1954, comes from a German-Lithuanian Jewish family. He fought in the Yom Kippur War in 1973. He is a clinical psychologist and psychoanalyst and the author of several books, including License for Insanity and An Arab in the Heart, a narrative analysis of the Middle East conflict. He is currently a lecturer at Haifa University.

Islam and Psychoanalysis
A Tale of Mutual Ignorance
The Islamic world and the world of psychoanalytic theory, says Tunisian scholar Fethi Benslama, have mutually ignored one another to this day. In this interview with Gabriela M. Keller, he explains why Islam contradicts psychoanalysis

www
"Israel on the Couch" on Google Books

END_OF_DOCUMENT_TOKEN_TO_BE_REPLACED
Social media
and networks
Subscribe to our
newsletter