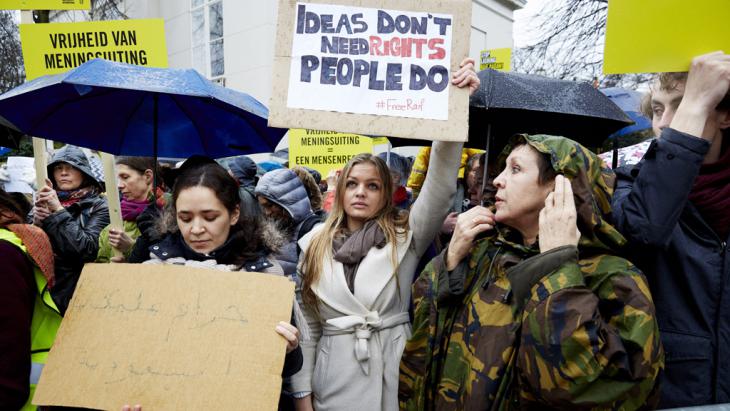 "We are all in this together, like it or not"

The shocking events of recent weeks – from the attacks in Paris, the flogging of Raif Badawi, and massacres in Nigeria and Pakistan – are all connected, writes Elham Manea, and they all deserve our equal and unreserved outrage and attention

I also tend to go beyond a localised focus on events. I prefer to see the bigger picture, the global context. The dots are also there and when connected, I see how Raif Badawi's case connects to "Charlie Hebdo", to Boko Haram's spree of violence in Nigeria, to al-Qaida's attack on Yemenis celebrating a religious festival, and to the Taliban massacre of children in a school in Peshawar, Pakistan.

How many times have you heard the following sentence? "The majority of victims of violent Islamic extremism live in Islamic countries." They are often of Islamic heritage (Sunni or Shia); citizens of Christian, Jewish, Yazidi, Ahmmadi, or Baha'i traditions; atheists; people who think differently, not to mention women and homosexuals.

But it never seems to ring a bell! People nod their heads absent-mindedly and only scream out at the top of their voices when it hits close to home. 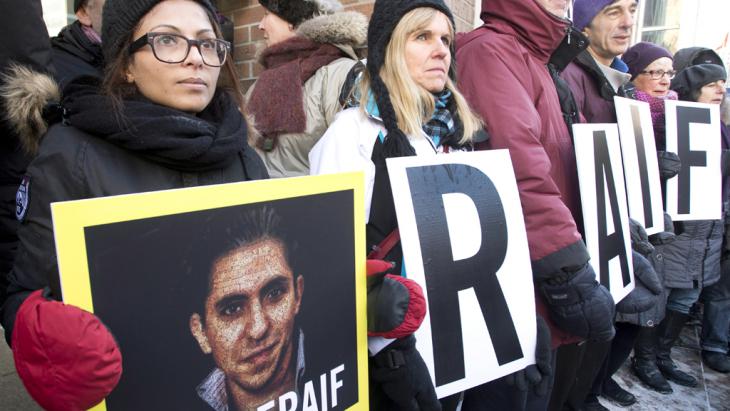 Ensaf Haidar (left) wife of blogger Raif Badawi, takes part in a rally for his freedom in Montreal, 13 January 2015. Just a few days before the blogger's birthday, his wife has said that she feels "destroyed". "But I don't want to sit in a corner and cry. That would be letting Raif and my children down."

All victims deserve our respect

A human was murdered because of a global threat. That should matter. The threat is real and it concerns us all. It has a name: violent Islamist extremism. We are all in this together, like it or not.

It is here where Raif Badawi comes in. It is here where the dots connect. His case, like that of the "Charlie Hebdo" journalists, is a case of freedom of expression. Raif Badawi was sentenced to 10 years in prison and 1,000 lashes for criticising the excesses of the religious establishment in the Saudi kingdom. He created a liberal forum, wrote a blog, and for that he was flogged. Both, "Charlie Hebdo" and Raif Badawi, were expressing an opinion. Both were exercising a universal human right to freedom of the press and freedom of opinion. 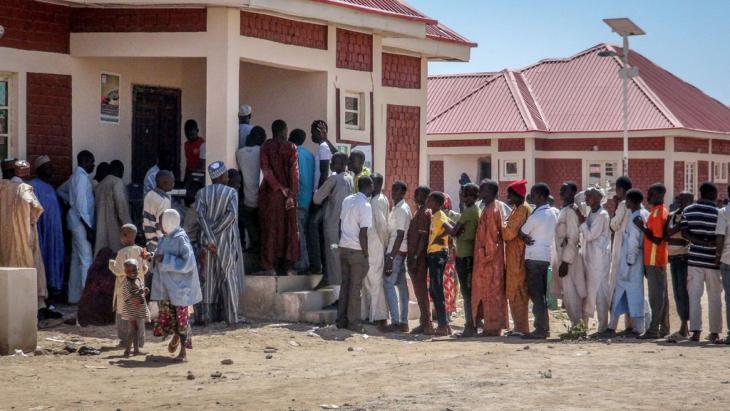 People take refuge in 'Teachers Village' in Maiduguri Province of Borno State, Nigeria, after Boko Haram attacked Baga City, 14 January 2015. "Extend to these Nigerians the same respect! Be outraged! It is not their numbers; it is not the skin colour of the victims; it is not their nationality – African or European. It's the human face that matters," writes Elham Manea

No room for cultural relativism

The two – violent and non-violent Islamist extremisms – are connected at global level. The kingdom of Saudi Arabia has been exporting through its transnational arms its line of non-violent extremism, poisoning the well of Islam and radicalising young men and women across the globe. It is this line of interpretation that paves the way for the message of political Islam and, at a later stage, to the resort of violence.

When we call on Saudi Arabia to free Raif Badawi and his lawyer Waleed Abulkhair, when we insist that the kingdom should abide by international human rights conventions and treat its citizens, men and women, as citizens with dignity and rights. When we do that, we are also demanding an end to its exportation of global non-violent extremism. Too much harm has been done by its ideology – in many parts in the globe – North and South alike.

Connect the dots to see the global danger we are facing. Connect them to see the face of a human being. Yours. We are one, like it or not. United in humanity and destiny.

Home
Print
Newsletter
More on this topic
The Saudi blogger Raif Badawi: 600 lashes for expressing opinionsSaudi authorities crack down on bloggers: Assault on the freedom of expressionWomen in Saudi Arabia: Caught in a System of Gender ApartheidFrance after the attack on "Charlie Hebdo": Much more is at stake than press freedomInterview with the cartoonist Khalil: "There is nothing that can justify this sort of violence"
Related Topics
Arab bloggers, Boko Haram, Charlie Hebdo, Democracy and civil society, Freedom of religion, Human rights, Islamism | Political Islam, Wahhabism
All Topics

No other Western poet was arguably so well-versed in the Koran or so fascinated by Islam as Germany's national hero, Goethe. In a new publication that examines all Goethe's ... END_OF_DOCUMENT_TOKEN_TO_BE_REPLACED

The disappearance of Razan Zeitouneh and her colleagues has been one of the greatest mysteries of the Syrian war – until today. DW's investigative unit hunted clues across six ... END_OF_DOCUMENT_TOKEN_TO_BE_REPLACED

Who’s financing, planning and commissioning terror attacks in Europe? This investigative documentary follows a trail that leads to Pakistan’s intelligence service, the ISI, which ... END_OF_DOCUMENT_TOKEN_TO_BE_REPLACED

The Libya Conference will be held in Berlin on 23 June. Much has been achieved since the last Libya Conference in Berlin in January 2020. The ceasefire is holding, there is a ... END_OF_DOCUMENT_TOKEN_TO_BE_REPLACED
Author:
Elham Manea
Date:
Mail:
Send via mail

END_OF_DOCUMENT_TOKEN_TO_BE_REPLACED
Social media
and networks
Subscribe to our
newsletter