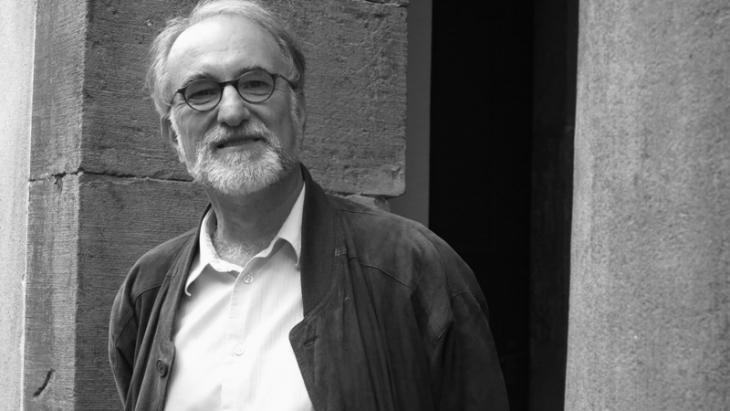 Musicians from Morocco to Iraq have been crossing paths at the Oriental Summer Academy in south-western Germany for ten years. Matthias Wagner, who founded and directed the academy, recently passed away after a brief serious illness at the age of 68. An obituary by Stefan Franzen

Matthias Wagner started out by studying mathematics, but broke off his studies to seek an outlet for his artisanal talents. He then pursued a profession as a guitar and lute maker, initially without any contact whatsoever with Arab culture.

His training took him to various workshops in Germany and Switzerland, although he also learned a great deal on his own, eventually deciding to do some advanced courses in lute making. He took his exam with Germany's most famous luthier, Karl Hannabach. In the 1990s, Wagner opened his own workshop for making and repairing instruments in Badenweiler-Schweighof, on the edge of the Black Forest.

1999 marked a decisive turning point in Wagner's life: a damaged oud found its way to his workshop. His interest was piqued and he was determined to repair the foreign instrument. This oud was the spark that would ignite an enthusiasm not only for the Arabic lute but for Arabic culture in general.

Bringing out the true colours of Arab music culture

Wagner began to travel, attending festivals in Morocco and Syria, and was invited by the world-famous Iraqi oud luminary Naseer Shamma to an oud forum in Cairo. Over the years, Wagner built up a network of contacts and began to make his own ouds based on historical models and to lovingly restore older instruments. In the process, he became acquainted with the leading oud virtuosos of our time. It was around about this time that negative headlines about the Arab cultural world were beginning to spread across the West. This inspired Wagner to show others the true colours of Arab culture.

In 2010, he organised the first Oriental Summer Academy in his hometown of Badenweiler. From the outset, Wagner took a two-pronged approach: he provided a concert stage for well-known musicians, while at the same time creating a space where they could pass on their knowledge to European students, including both advanced players and absolute beginners. 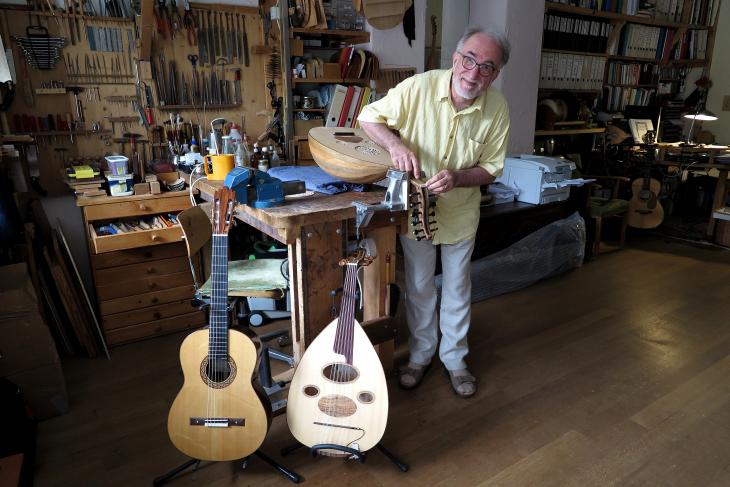 "1999 marked a decisive turning point in Wagner's life: a damaged oud found its way to his workshop. His interest was piqued and he was determined to repair the foreign instrument. This oud was the spark that would ignite an enthusiasm not only for the Arabic lute but for Arabic culture in general," writes Stefan Franzen. Pictured here: Matthias Wagner in his workshop

In the early years, performances and instruction at the academy revolved around the oud. The virtuoso oud player Mustafa Said from Egypt was resident artist and teacher at the festival for several years. In its third year, however, the academy, which had in the meantime gained the support of Baden-Württemberg's Ministry of Culture, expanded to encompass other instruments as well: the kanun zither, the ney flute, percussion instruments such as the riq, and later also the spike fiddle known as a djoze and voice as well.

Students flocked to the academy from far beyond the region of south-western Germany, and it quickly attained an international reputation – for one thing, because it offered the opportunity to learn from great masters, but also because of the academy's wonderfully congenial atmosphere.

Arabic music in a synagogue and a church

In 2014, Wagner relocated the Oriental Summer Academy to the nearby picturesque town of Sulzburg in the Markgräflerland region of south-western Germany, a community that welcomed the academy with open arms. The evening concerts became increasingly popular, held at two acoustically exceptional venues in town: the Old Synagogue and the Church of St Cyriak.

Arab music concerts in a Jewish and a Christian house of worship: that alone has a high symbolic significance for intercultural understanding that goes beyond religion. Indeed understanding – including musical understanding – was the academy's hallmark: Wagner curated with great sensitivity not only the concerts devoted to Arabic music, but also the encounters between oriental and occidental art music and folk culture. The result was first-class, moving concerts that will long be remembered by all those who attended them.

A few highlights from the academy years: in the Awda project, the French cellist Didier Petit and Dimitris Varelopoulos from Greece playing the Greek island lute, a relative of the bouzouki, joined forces with the Palestinian oud virtuoso Adel Salameh. For the project "The Breath of Purity", Wagner brought in Frank Stadler, first concertmaster of the Mozarteum Orchestra Salzburg, who with Cairo composer Hossam Mahmoud on the oud and the harpsichordist Angleika Moths transposed passages of an opera by Tomaso Albinoni to Arabic instruments.

Maghrebian and European women in the Al-Andalussyat trio including the Algerian singer Naziha Azzouz, likewise a long-time participant in the academy, presented the sound culture of ancient Andalusia, which encompassed three world religions. Lee Santana and the Egyptian Nehad El-Sayed formed an international quintet to try combining the Arabic oud tradition with European lute music under the title "A Spanish Romance". Finally, the Ensemble Albaycín introduced German listeners to the solemnly elegant Arabo-Andalusian "Nawbas Suites". 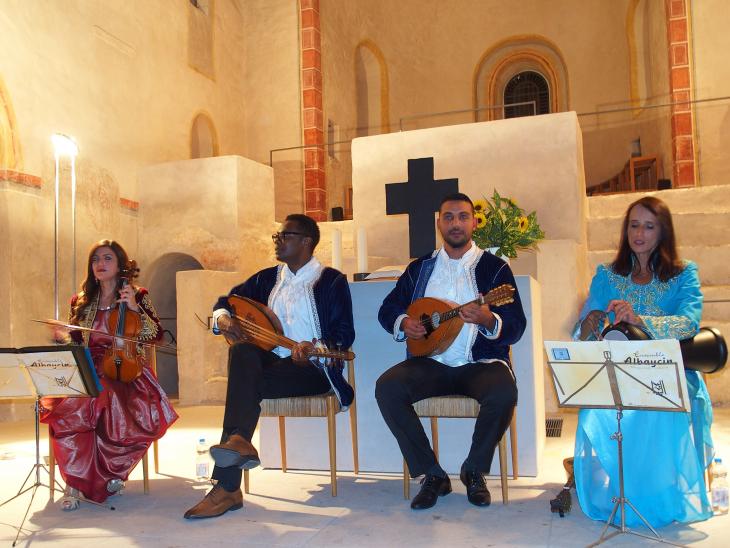 The Ensemble Albaycín performing at the Oriental Summer Academy 2018 in the Church of St Cyriak, Sulzburg, where they introduced German listeners to the solemnly elegant Arabo-Andalusian "Nawbas Suites"

Syria in the spotlight

In recent years, Syria was repeatedly in the spotlight of the academy programme. Percussionist Firas Hassan and the ney player Mohammad Fityan were two frequent guest lecturers in Sulzburg. Both of them were forced to leave their war-torn homeland, but have since been able to build new musical careers in Europe.

Concerts and lessons at the academy were flanked by lectures and readings, for example a talk by Nadja Madani-Moudarres, chair of the Friends of Arab Art Association, on the wide-ranging influences of flourishing Arab culture and science on medieval Europe. The Iraqi author Najem Wali gave readings from his Baghdad novel.

With only a small team to support him, Wagner managed the mammoth task of mounting the academy year after year until 2018 – demonstrating great dedication, a wealth of expertise and a warm and kind nature. Over the years, more than twenty masters from Morocco, Algeria, Tunisia, Egypt, Jordan, Syria, Iraq and Iran were guests in Badenweiler, Sulzburg and Freiburg.

How and where the academy will continue after the death of its guiding spirit is not yet clear.

"People are the enemies of what they do not know" – Wagner chose this saying, attributed to Ali Ibn Abi Talib, the cousin of the Prophet Mohammed, as the motto for the Oriental Summer Academy that he founded.

Those words are more topical than ever in view of today's growing political frictions. Matthias Wagner was an extraordinary mediator between the Orient and the Occident. His work will be sorely missed.

Surging coronavirus cases in many parts of the world have overshadowed the start of this year's Muslim holy month of Ramadan, with festivities once again curtailed by contagion ... END_OF_DOCUMENT_TOKEN_TO_BE_REPLACED

The Prophet Muhammad never executed anyone for apostasy, nor encouraged his followers to do so. Nor is criminalising sacrilege based on Islam’s main sacred text, the Koran. In ... END_OF_DOCUMENT_TOKEN_TO_BE_REPLACED

Televised Turkish dramas are all the rage in the Middle East. A young Ottoman TV Empire has been expanding its soft power by harnessing regional dialects, Arabic names and viewers ... END_OF_DOCUMENT_TOKEN_TO_BE_REPLACED

German Middle East analyst Guido Steinberg and television journalist Ulrich Tilgner have both published new books on the conflicts in the Middle East. Their analyses and their ... END_OF_DOCUMENT_TOKEN_TO_BE_REPLACED

Nawal El-Saadawi has died in Cairo at the age of 89. The prominent doctor, activist and author became internationally known for her outcry against female genital mutilation and ... END_OF_DOCUMENT_TOKEN_TO_BE_REPLACED

As the globe races to inoculate against coronavirus, Egypt President Sisi’s regime plans to profit from the essential shot. Making Egyptians pay for their own vaccines is part of ... END_OF_DOCUMENT_TOKEN_TO_BE_REPLACED
Author:
Stefan Franzen
Date:
Mail:
Send via mail

END_OF_DOCUMENT_TOKEN_TO_BE_REPLACED
Social media
and networks
Subscribe to our
newsletter