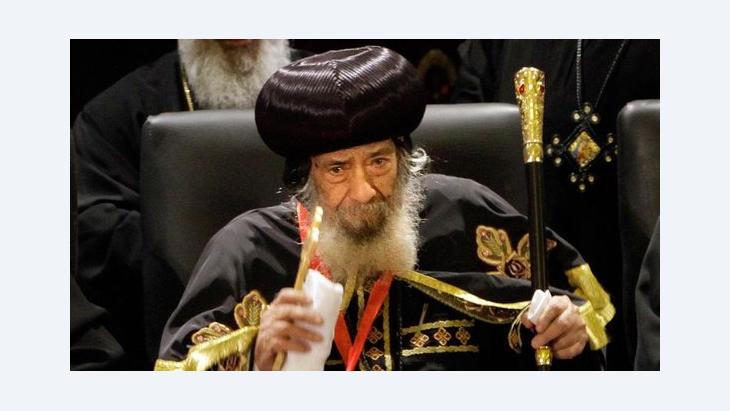 On the Death of Pope Shenouda III

A Pragmatist Who Was Not Afraid to Take a Stand

Pope Shenouda III, the head of the Christian Coptic Church, passed away last weekend. Throughout his time as Coptic spiritual leader, he faced a variety of challenges from all sides: Islamisation, dictatorship and even revolution. His successor has yet to be named. Karim El-Gawhary reports from Cairo

How does one position a Christian Church in a Muslim country in times of growing Islamisation? This was the biggest challenge faced by the spiritual leader of Egypt's Copts, Pope Shenouda III.

The charismatic 88-year-old patriarch, who led the community of orthodox Copts for four decades, passed away at the weekend, on 17 March 2012.

The Coptic Church is one of the oldest in the world. There are an estimated eight million Copts in Egypt, about 10 per cent of the country's population. Another two million live in exile.

On Saturday, as news of his death spread, tens of thousands of Copts gathered in St Mark's Coptic Cathedral in Cairo. Messages of condolence were also received from the Muslim establishment. "Egypt has lost a unique man at a delicate time, a time when Egypt has urgent need of its wisest people, their experience and their clear heads," said the Grand Sheikh of the Islamic Al-Azhar University, one of the highest legal authorities in Sunni Islam. 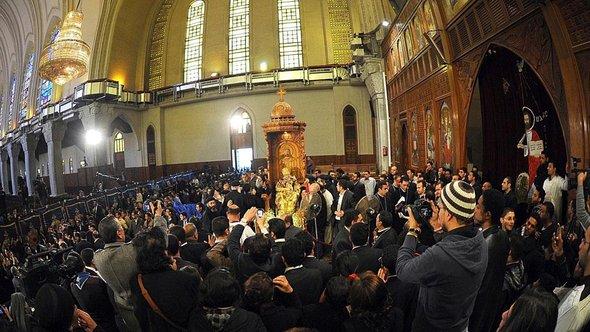 Paying their final respects to their charismatic patriarch: thousands of Coptic Christians came to St Mark's Coptic Cathedral in Cairo to pray for their pope, whose mortal remains are on display there. The 88-year-old pope died on Saturday, 17 March 2012, following a serious illness. Shenouda was made spiritual leader of the Copts in 1971 and remained head of the Church for over 40 years

​​In addition to Islamisation and tensions between Muslims and Christians, Shenouda also faced another problem last year, namely the re-definition of the Church in relation to secular power. The Pope had remained loyal to Egypt's dictator, Hosni Mubarak, right up until he was ousted and now had to establish the position of the Church in revolutionary Egypt. Shenouda did so by courting the new powers-that-be, the Supreme Military Council.

However, when the military used brute force to disperse a demonstration made up mostly of Coptic Christians in October last year, killing 26 people, the pope declared that the dead were "martyrs" and condemned the violence of the military. Nevertheless, Egypt's generals were once again invited to the Coptic Christmas Mass on 7 January. As they were welcomed by Shenouda, Coptic youths in the background openly called for the overthrow of military rule.

The question of relations between the Church and secular power was a question that stayed with the 117th pope of Alexandria, the successor of St Mark the Evangelist, throughout his time as patriarch, a question to which he had a number of different answers. After his enthronement in 1971, he was initially considered a political hot-head who not only wanted to renew the Church from the inside, but also wanted to give Copts a more prominent place in society. In doing so, he was fighting against the signs of the times.

Egypt had been in the grip of a wave of Islamisation since the middle of the 1970s. The regime was making an increasing number of concessions to the Muslim Brotherhood, which was conquering the streets of the country with the slogan "Islam is the solution".

When the former president, Anwar Sadat, declared the principles of Sharia to be the principal source of legislation in Article 2 of the Egyptian constitution, it was evident that there would be a confrontation between the regime and the Church. In 1981, Pope Shenouda cancelled the official Easter celebrations and refused to receive a government delegation.

Sadat reacted by sending the pope into exile in the desert monastery in Wadi El Natrun, where Shenouda had begun his clerical career as a monk years before. Christened Nazeer Gayed, the young man took the name Fr Antonios El-Syriani when he became a monk. He spent six years there living as a hermit in a cave.

While Shenouda was in internal exile in the desert monastery, Sadat was assassinated by militant Islamists, the very spirits he himself had called.

However, it would take another three years for Sadat's successor, Hosni Mubarak, to bring the Coptic pope back to Cairo. After that, there was a kind of ceasefire between the Church and the regime.

Despite growing discrimination against Copts and repeated flare-ups of disputes that often ended in bloodshed – during which Muslims, who were not least inspired by radical Islamist ideals, attacked their Coptic neighbours – Shenouda called on the Copts to remain calm at all times.

For this, young Christians in particular and also Coptic organisations outside the country, accused him of not defending the rights of Christians vehemently enough. The Church always argued that these protests would only aggravate the conflicts between the religious groups in Egypt.

What is undisputed is that Shenouda worked tirelessly to expand his Church around the world. When he took office in 1971, for example, there were only four Coptic churches in the USA; now there are over 200. In Europe too, there are now 50 Coptic churches and ten Coptic bishops.

Between a rock and a hard place: during his tenure, Shenouda III had to cope with a variety of difficult challenges such as the Islamisation of Egypt, dictatorship and revolution. However, in doing so, he earned the respect of Muslim dignitaries such as the Grand Sheikh of Al-Azhar University, Ahmed al-Tayeb, who called him "a unique man"

​​Dialogue with other Churches was of great importance to Shenouda, who grew up the youngest of eight children in Asyut in Upper Egypt. In 1973, he became the first Coptic pope in 1,500 years to meet the Catholic pope in Rome. Nevertheless, this did not prevent him from criticising Pope Benedict XVI for his controversial lecture on Islam in Regensburg.

Benedict, he said, had not given sufficient consideration to the feelings and possible reactions of Muslims. "Showing a passion for one's own religion should not lead one to judge someone else's religion," he said.

The spiritual leader of the largest Christian community in the Arab world always adopted a tough stance on Israel. He repeatedly stated that "Christians should only visit Jerusalem hand in hand with their Muslim brothers when the conflict there has been solved in accordance with the wishes of all those involved." He also threatened to exclude from communion any Egyptian Christians who travelled to Israel. However, the Church generally turned a blind eye when members of the community organised pilgrimages to the Holy Land.

It is unclear at present who Shenouda's successor will be. The position is generally given to a relatively unknown monk. Three groups will want to have a say in the matter. The government in Cairo wants a pope who can mobilize the Copts without pursuing an independent policy. The two million Copts living abroad will want a pope who goes on the offensive with regard to discrimination against their fellow Copts in Egypt. Influential Coptic business people would prefer a spiritual leader who would take a back seat rather than posing a threat to the co-existence with Muslims.

Home
Print
Newsletter
More on this topic
The Military's Attack on Egypt's Copts: A Call for Civil WarEgypt's Christian Minority: Copts Fear for the FutureChristians and Muslims in the New Egypt: Civil Society Instead of Confessionalism
Related Topics
All Topics
Date:
Mail:
Send via mail

END_OF_DOCUMENT_TOKEN_TO_BE_REPLACED
Social media
and networks
Subscribe to our
newsletter