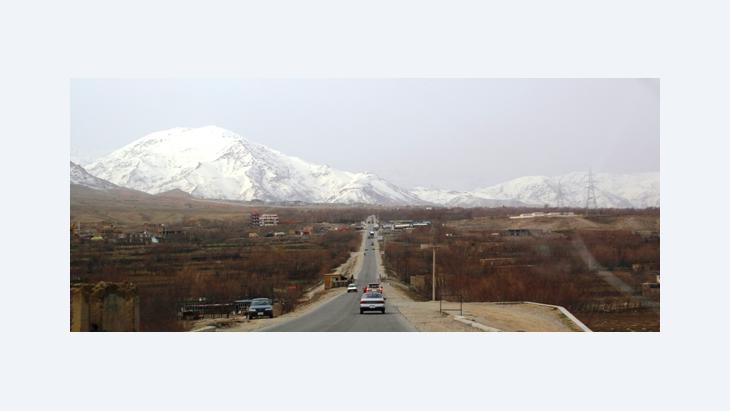 On Tour in Afghanistan, Part 1
On the Highway from Kabul to Mazar-i-Sharif

﻿Around the turn of the Persian calendar year, our author Marian Brehmer set off for a two-week trip through Afghanistan. In Mazar-i-Sharif and Kabul he spoke with people outside the war zones. What are their hopes for the new year, and how do they view the recent developments in their country?

Either God is trying to punish us, or he's confused, they say. Snow in Kabul in mid-March, in other words at the end of Hut, the last month in the Persian calendar – that is not normal.

When I arrive in Kabul it's cold, dark and foggy. It snowed here just a few days ago, as can be seen by small piles of snow at the roadside, now brown from the dirt of the street. The snow also left behind a layer of muddy brown slush that impedes our progress down side streets.

And this although the Afghans will be celebrating Nouruz in just a few days, the Persian holiday that marks the coming of spring and the New Year. Even in an Afghanistan that is today Islamic through and through, this tradition from pre-Islamic days still occupies an important place in people's lives. 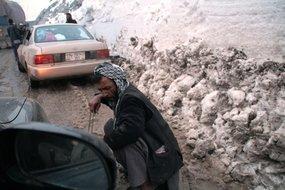 ​​Although Nouruz is not celebrated here as enthusiastically as in neighbouring Iran, hundreds of thousands of people nonetheless flock to Mazar-i-Sharif from all over the country at the beginning of each year. In front of the Blue Mosque of Mazar the New Year is ushered in with a festive ceremony. Those attending count themselves as particularly fortunate. In buses, cars and planes, pilgrims from Kabul and other parts of the country make their way here for this special occasion. I plan to set out by taxi for the "capital of the North".

"Bia ke berem ba Mazar" (Let us drive to Mazar) drones from the radio of our taxi driver, whom I'll call Gul Zaman. Gul Zaman has chosen the right road song for the 425-kilometre-long stretch from Kabul to Mazar-i-Sharif. It's sung by Sarban, the legendary star from the golden years of Afghan pop. He embodies with his music the era before the Soviets, before the long years of civil war and before the Taliban. A time that for many Afghans now seems light years away. "Bia ke berem ba Mazar" will be played over and over again thousands of times throughout the country in the coming days.

Gul Zaman is wearing a dusty shalwar kameez and his head is wrapped in a black-and-white scarf that resembles a Palestinian kaffiyeh. His face is dark and furrowed. The lower part is covered by a dark beard run through with strands of grey. Gul Zaman must be at least in his late fifties. But he is still the fastest man on the road. In a series of passing manoeuvres he pulls his nineties Toyota past a queue of trucks creaking along the Salang Pass. 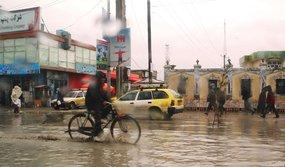 "God must be confused." Flooded streets in Mazar-i-Sharif shortly before the holiday of "Nouroz" which marks the coming of spring and the New Year

​​The pass has been closed for several days due to the danger of avalanches. Just a few hours ago, the bottleneck was opened up again for traffic. And soon afterward the first taxis were already jostling at the edge of Kabul to bring the next passengers to Mazar. Of all the drivers at the taxi stand, Gul Zaman shouted and gesticulated the least. That spoke in his favour.

We now have the capital behind us. The highway leads over the plains of the province of Kabul. Rows of mud houses pass by. Donkeys and children carry bundles of bricks. In narrow wooden huts at the roadside the farmers offer their harvest for sale. In some villages trailers that were left behind by trucks have been converted into houses or workshops. Their gates now serve as doors. Bare light bulbs illuminate steel interiors.

Many of the tour buses we see have German licence plates. Sometimes the Afghan plate has simply been stapled on over the German one. At the sides, the initials of German cities are still visible. On the imported buses the names of tour organisers vie for attention as if in a competition. The bus company "Schulz Reisen Wuppertal" transports only Afghans, and a bus that once belonged to the "Lübbenau local group" of the Arbeiter Samariter Bund (Workers' Samaritan Federation), is stuck in the snow.

"I've been driving a taxi for thirty years. I drove under the Soviets, under the Taliban, and now under Karzai," recounts Gul Zaman, not taking his eyes off the road. I ask him which of those periods was the best. Without missing a beat, Gul Zaman answers: "The present one. Afghanistan is finally free." 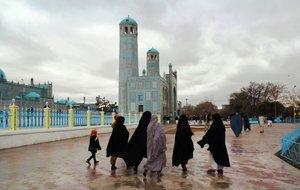 Clouds over Mazar-i-Sharif's Blue Mosque. Mazari Sharif means "Noble Shrine", a reference to the large, blue-tiled sanctuary and mosque in the center of the city

​​The road meanders into the mountains. Almost imperceptibly, we're gaining in altitude. The villages no longer lie on the right and left sides of the road, but cling to the rough rock faces instead. Surrounded by a thick blanket of snow, they look like islands in a sea of white. The same picture presents itself in every town: ten-year-old boys have shovelled the snow to the wayside and are leaning on their shovels to catch their breath. In some places they've piled up a two-metre wall.

Signs poking up out of the snow show the number of kilometres until the Salang Tunnel. In the late nineties the entrances to the tunnel, which is situated at an altitude of 3,400 metres, were destroyed in battles between the Northern Alliance and the Taliban. Under the Taliban, Gul Zaman had to take the much longer and more arduous route through Bamiyan to Mazar. Back then, there were fewer taxis on the roads. So Gul Zaman used to earn more than he does today. He has to feed a family of seven on his earnings. "It's enough to live on, but not to save."

A few kilometres before the pass, traffic comes to a halt for a whole hour. Gul Zaman remains calm. Trucks block the road. Cars are scattered every which way. It's impossible to move either backwards or forwards. Two dark green army pickups wend their way through the waiting cars. Afghan soldiers with machine guns now direct the traffic. Some are in uniform, others in civilian dress. They bark into radios and demonstratively show their presence. But that's about all they can do.

Gul Zaman waits. Slowly, the vehicles opposite begin to pass by us again. Sometimes Gul Zaman spies a familiar face and waves. Before we reach the tunnel entrance he produces some heavy snow chains. By the light of the built-in torch in my mobile phone he lays the chains around the tyres. The road is icy and Gul Zaman reluctantly slows down.

After a brief rest behind the Salang Tunnel he lights a cigarette. The sweet smell of marijuana envelopes the taxi. It has long since grown dark. Soldiers standing at checkpoints sporadically stop cars passing through, searching for insurgents. Someone with thirty years of driving experience is not going to be thrown by a single joint, I say to myself. And thus Gul Zaman flies us to Mazar, repeatedly starting up the Sarban cassette again for a new round.

The capital of the North welcomes us with the kind of rain that hasn't been seen here for a long time. The muddy water rises so high that drops seep in through the cracks in the car's doors. God must really be confused this time.

END_OF_DOCUMENT_TOKEN_TO_BE_REPLACED
Social media
and networks
Subscribe to our
newsletter