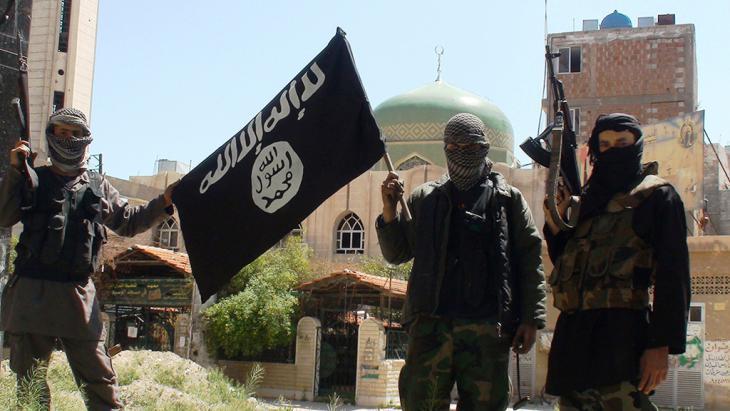 One year of IS in Iraq
The caliphate is a reality

One year ago, Islamic State began its triumphal march through Iraq. The capture of the province Anbar played a key role in this advance. Birgit Svensson in Baghdad looks back on a year of IS in Iraq

They proceed according to a practiced routine. Three days before the attack on Ramadi, the black-clothed, self-proclaimed holy warriors took over a small military base on Lake Tharthar, not far from the province's capital. They murdered 185 soldiers from the Iraqi army – among them the division commander, who had no idea what they intended to do. His subordinates were left without orders and with the gnawing fear that they could be next.

After that, it was easy for "Daesh", as IS is called in Iraq, to get another major city under its control. Next, they captured the surrounding villages and communities in order to secure their positions. Check points were established and houses searched in order to seize police officers and soldiers still loyal to the government. After that, the black jihadi flags were hoisted in prominent places. A governor was put in place to organise day-to-day business. Those who swore allegiance to the caliphate and Caliph Ibrahim got jobs or were allowed to continue their original work.

So it was in Mosul, Tikrit, Afar, Sinjar and Fallujah, the first city to fall to IS. A year after IS marched into Iraq, in what was generally described as a lightning invasion, the Islamist caliphate is taking concrete shape. And the province of Anbar, to the west of Baghdad, has been assigned a key role in these developments.

Iraq's largest province stretches to the Syrian and Jordanian borders on one side and to Baghdad on the other. The Al-Qaim border crossing into Syria has long been firmly in the hands of the jihadists. On the Syrian side, their sphere of influence is even greater. The border is open and uncontrolled. A state structure is starting to emerge.

The crossing into Jordan is a very different matter. Here, "Daesh" controls the border and levies taxes and fees on those who want to cross. The border is secured with barbed wire and minefields. A truck driver reports that there is actually no problem crossing over. Even so, very few people dare. Most goods now come into Iraq from the north, or by ship to Basra. 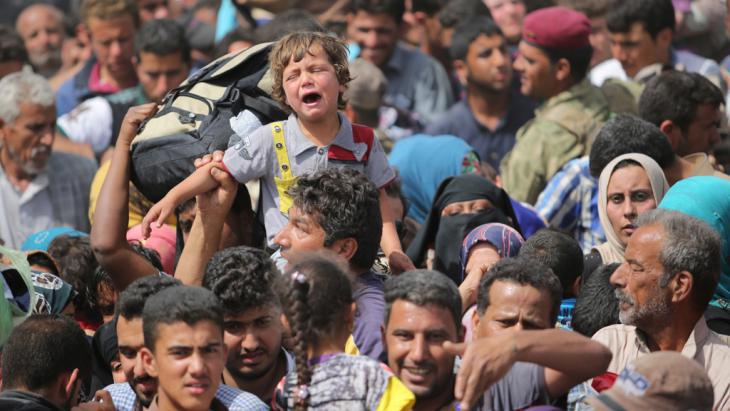 Fleeing violence and IS tyranny: Islamic State took the provincial capital Ramadi in May 2015, striking a heavy blow to the Iraqi army. According to UN sources, 40,000 people fled from the extremists. Pictured here: civilians fleeing Ramadi in April 2015

A breeding ground for IS ideology

Anbar is an ugly province: flat as a board and consisting largely of desert. The hot Shamal winds whip up dust and sand here more violently than elsewhere. The province has no oil fields and only one small gas field. Its capital, Ramadi, is unlikely to win any beauty contests either – as is Fallujah. Apart from 88 mosques and an exceptional kebab restaurant, it has nothing to offer.

And yet this, of all places, is the cradle of the new state. For of course, it is not just military might that makes a state stand or fall. It is the people who live there. The inhabitants of Anbar cling to a symbiosis of religion and tribal tradition, which secures and upholds the archaic structures. It provides a breeding ground for IS ideology.

This is particularly clear in Fallujah. With approximately 310,000 inhabitants, it is the largest city in the province and has been in the hands of IS since January 2014. Although many of its inhabitants fled, many have now returned. "We have always been traditionally conservative," explains Sheikh Saadon from Fallujah. "You might say: Islamically conservative."

The women are, without exception, heavily veiled, and most wear long, black coats even in summer. You see more veiled faces here than elsewhere in Iraq. Women hardly go out, and if they do, then only accompanied by a man. After dark they have to be at home. The worlds are strictly separated. A male visitor will hardly ever get to see the lady of the house. Men keep to themselves, and so do women.

"We've been practising Sharia for a long time," says the sheikh, who has two wives and ten children. Anbar has its own legal system, namely that of Islam and the tribes. "When al-Qaida came, the Americans bombed us. Now, with 'Daesh', they leave us in peace."

While the Americans fly air strikes on Ramadi, they disregard Fallujah. Foreign IS fighters now coming to Anbar are adapting to the customs of the inhabitants, says the sheikh. That's how he sees it. French is now being spoken in Fallujah. That was not the case before. 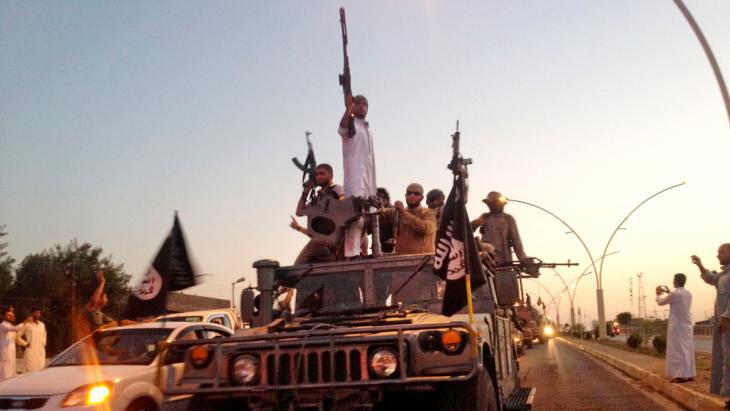 The first anniversary of IS's conquest of Mosul: in June 2014, the extremists took over Iraq's second largest city, a stronghold of Sunni opponents of the Shia-dominated government. The IS fighters capture large quantities of weapons and armoured vehicles, many of which were provided by the USA. Pictured here: IS fighters in Mosul, 23 June 2014

Sheikh Saadon's story is typical of a great many people in Anbar. Even in Saddam's time, he was faced with a choice between state or tribe. It is a question he is facing once again now. As a pilot in the Iraqi air force, he had to join the Baath Party, otherwise he would not have got the job. "If you weren't from Tikrit and didn't belong to Saddam's inner circle, then even as a Sunni, you only stood a chance if you were in the party," he reminds all those who now accuse him of having been a Baathist. Shias also joined the party in droves.

When the Americans came and dissolved the army, he lost his job and had to drive a taxi in Baghdad. A disgrace, as he sees it. Now the 55-year-old is training young "Daesh" fighters, and getting paid well for it. He is useful once more.

In between these periods, when the "Sahwa" – the alliance between the US army and the tribes – was being trained to drive out al-Qaida, things were different. Then, he was also given weapons and money, but when the Americans had gone, the Shia Prime Minister Nouri al-Maliki wanted nothing more to do with the Sunnis and stopped the payments to the "Sahwa" fighters. Saadon sold the weapons to "Daesh".

"We'll never fully get Anbar back," predicts the Iraqi Member of Parliament Mithal al-Alusi, who himself comes from Anbar. Alus is a little village near Haditha, where the Euphrates dam has already been the cause of violent clashes. Whoever is in possession of the dam controls the water and can cause either tidal waves or drought. 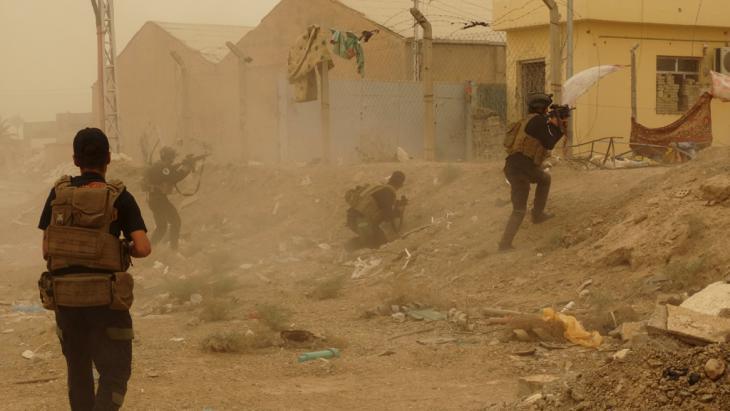 IS has taken control of large swathes of Iraq and has not been stopped by the US-led coalition. In mid May, the jihadists conquered Ramadi, the capital of Anbar province. This has increased fears that Islamic State is preparing for another offensive. Pictured here: Iraqi security forces battling for Ramadi

Divisions within the tribes

Alusi knows how powerful the tribes are in his province. He also knows about the dilemma currently facing them. While most people in Fallujah are in favour of "Daesh", people in Ramadi – and not only there – are divided. In Haditha too, near his home, he says there are fierce arguments within the tribes about whether to join the "Al-Hashb al-Shabi", as the anti-"Daesh" alliance is called.

These forces bring together Sunni and (overwhelmingly) Shia associations, tribal leaders and soldiers of the Iraqi army. The Albu-Nimr tribe is a good example of how violently these controversies can be decided, says Alusi.

The massacre at the end of last year, in which more than 300 men from this tribe were brutally murdered, involved not only foreign fighters from "Daesh", but also members of the tribe who had committed themselves to "Daesh".

The clashes in Baghdad between supporters of Muqtada al-Sadr and pro-Iranian militias show that an intra-Shia power struggle is in full swing. An analysis from Cairo by Karim El- ... END_OF_DOCUMENT_TOKEN_TO_BE_REPLACED

Bachtyar Ali sends the hero of his latest novel – "Mein Onkel den der Wind mitnahm" – literally flying. Jamshid is so thin after his years as a political prisoner that a gust of ... END_OF_DOCUMENT_TOKEN_TO_BE_REPLACED

In this essay, renowned Lebanese journalist and writer Hazem Saghieh asks whether the Arab Levant, which stretches from Iraq in the east to Egypt in the west, will remain an ... END_OF_DOCUMENT_TOKEN_TO_BE_REPLACED

Climate change is taking its toll on communities in Iraq. Younes Ajil turns on the tap in his home but nothing comes out. Villages in the south of the drought-hit country are ... END_OF_DOCUMENT_TOKEN_TO_BE_REPLACED

END_OF_DOCUMENT_TOKEN_TO_BE_REPLACED
Social media
and networks
Subscribe to our
newsletter