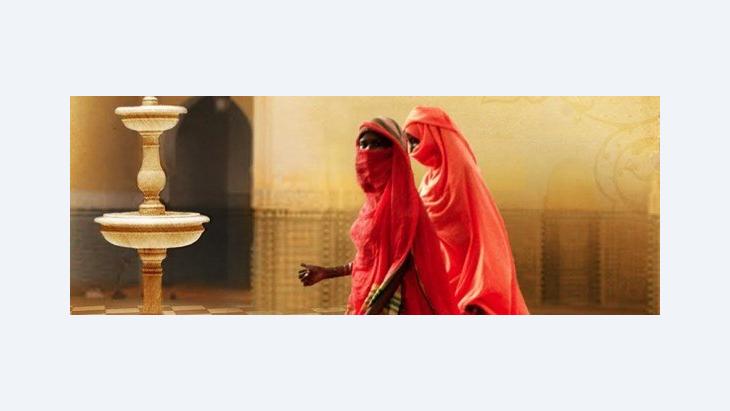 Oriental Clichés in Literary Publishing
A Dalek in a Burqa

No matter what the content of the book – covers of Arab female authors's published in Europe and the US will always be graced with a veiled woman. In this article, Jordania-British author Fadia Faqir relates her experiences and curious findings

﻿The UK and Commonwealth rights to Leila Aboulela's latest novel, Lyrics Alley, had been acquired by Weidenfeld & Nicolson for publication in December 2010. Editor Arzu Tahsin says, Lyrics Alley is one of the most accomplished and thrilling portraits ever written of Sudanese society just around the time of independence in the 1950s.' Serious fiction you might think, but the way it is packaged and promoted trivialises it.

The soft-focus image on the cover is of two women in a burqa next to a fountain in an inner yard of a mosque. Aboulela's 1999 novel The Translator received better treatment, but the Heinemann African Writers Series' edition of 2001 reverts back to that ahistorical, essentialised, fossilised image of the veil. A woman in white hajj costume stands helpless in the foreground although the novel takes place largely in Scotland and has nothing to do with Mecca.

A time of more respect 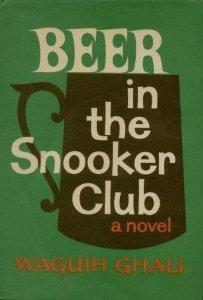 A love letter to two cities, Cairo and London: Waguih Ghali's only published novel, Beer in the Snooker Club (1964)

​​Back in 1964, a time when the Arab world was perhaps perceived as more progressive and on the cusp of secularisation, when Beer in the Snooker Club by Waguih Ghali was published, the designers at Alfred A Knopf, New York, had more respect for Arab authors. They opted out for a simple image of a black tankard against a green background.

Even in 1987 when Serpent's Tail published it things were different. On the cover a young Egyptian man is standing by a billiard table smoking. The window behind him overlooks the Nile with its feluccas and pine trees. The implication is that Ghali is one of us, but is able to open a window to the beautiful other. With the escalation of hostilities between the Arab and western worlds and hardening of Muslim-Christian binaries things went steadily downhill.

The image is in contrast with the content, a narrative set in the slums of Casablanca and deals with corruption in today's Morocco. It harks back to a time before modern education was introduced and confirms readers' preconceptions about the Arab world, an area held still outside the variables of history and geography and a hotbed for fundamentalists and terrorists.

Male Arab authors like Rafiq Shami, Robin Yassin-Kassab, Hisham Matar and Rawi Hage are treated better by the publishing industry in Great Britain and the US. Rafiq Shami's novel "The Dark Side of Love" (German original: "Die dunkle Seite der Liebe") has an Islamic arch, but there is no veil in sight.

Jamal Mahjoub's Navigation of a Rain Maker traces a journey that is more than lines on a map. The reader travels into a present-day Africa beset with contradictions and contrasts, enduring the ancient scourges of famine and war, into the struggling mind of a man trying to come to terms with his life. The desert, a broken jeep, and an African buried in the sand reflect its content.

Blind to cultural distinctions and nuances 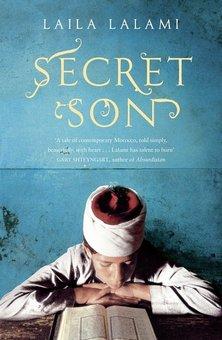 Don't judge a book by its cover: Laila Lalami's novel Secret Sonset in the slums of Casablanca and deals with corruption in today's Morocco

Female Arab Muslim authors are instantly associated with the veil. You would find a myriad of headdresses on the covers of their books. Most of the time the designers are blind to cultural distinctions and nuances. The signals of the specific semi-nomadic culture you find in my novels are rarely picked up by publishing houses.

Bedouin Jordanian women are represented on the cover by Afghani women in burqa. In the Czech Republic My Name is Salma is translated into 'Sin and Damnation' and has a woman with a thin veil standing in a mosque. This particular brocaded veil and mask can be found in the Gulf region rather than the Levant, where the novel is set. This cultural inaccuracy is comparable to having Paris on the cover of Martin Amis's novel London, or the Tower of Pisa on the cover of Pat Barker's Union Street.

I could write about Daleks in outer space and the designers and hordes of public relations teams would dress them in an Afghani burqas. Nowhere in my fiction do I engage with the veil except when Salma takes it off in the UK. My heroines are Bedouin and have their own unique headgear, captured on the cover of the Dutch translation of Pillars of Salt.

The British edition of Pillars of Salt was sent to design students somewhere and it came back with a dark, blue-eyed woman with large masculine hands. If you look carefully you might find green-eyed Bedouins, but I have never encountered blue-eyed ones in Jordan. So I sent it back with some instructions and it came back badly drawn, the Bedouin woman's face smudged with dark paint that looked like a fake tan gone wrong. 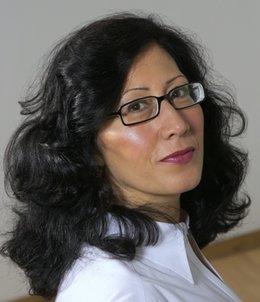 Fadia Faqir's most recent novel was translated into thirteen languages. Apart from being a novelist, Faqir also teaches creative writing at the University of Durham

I rarely approve the covers of my novels before they get published and I first encounter them on the Internet. If I express reservations on the title, the packaging or promotion of my books some publishers threaten me with breaking the deal.

The Cry of the Dove in the USA was promoted as a confessional literature. I insisted that the novel must be promoted as a piece of fiction. On publication 'a novel' was placed on the cover, but you need a magnifying glass to see it. It comes across as 'misery memoir' by yet another repressed Muslim woman.

Nisanit explores the masculine world of the guerrilla fighters and political prisoners. The UK Penguin publication has a beautiful Palestinian peasant woman on the cover next to a masked guerrilla fighter.

It is a romanticising of a novel that has no shred of soppiness in it. In a setting full of blood, pus and shit the stream of consciousness follows the protagonist's descent into madness, yet the cover would make the editors of Mills and Boon proud. The USA Viking/Penguin edition has a veiled woman on the cover in the middle of – yes you guessed it – a mosque yard. 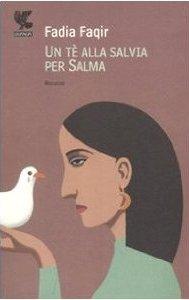 No demeaning cultural subtexts: cover of the Italian edition of Sage Tea for Salma

There are many arches, fountains and mosques on the covers of British and American Arab authors. It is ironic because most mosques are exclusively male spaces and women have their own side entrances into what is normally an inferior prayer room. And the architecture of Arab cities has changed fundamentally since caught by Charles Doughty in Travels in Arabia Deserta in 1888.

Only 3.5% of books published in the UK are translations and about 40% in other European countries. Respect for ethnic authors correlates with that. Ungo Guanda Editore, the Italian publisher published my novel under its original title "Sage Tea for Salma" and had a simple image on the cover of an unveiled Arab girl holding a dove (hardback) and of an exquisite tea set (paperback).

In France they opted out for a glass of Moroccan tea, gold-rimmed and colourful, next to a bland mug of coffee with the union jack on it, a dig at the British perhaps. In many ways it captures the essence of the narrative and the duality of vision and allegiance of the character.

How can we expect Jordanian women to participate fully in political life if they know that they don’t enjoy the same legal status as their male counterparts, or the constitutional ... END_OF_DOCUMENT_TOKEN_TO_BE_REPLACED

Despite Syria's lengthy civil war, dictator Bashar al-Assad is now being courted by many governments in the Middle East as if nothing ever happened. The reasons for this vary. By ... END_OF_DOCUMENT_TOKEN_TO_BE_REPLACED

Horses and mules have long drawn tourist carriages through Jordan's ancient city of Petra, but animal rights concerns are driving a project to start replacing them with electric ... END_OF_DOCUMENT_TOKEN_TO_BE_REPLACED

Jordanian writer Jalal Barjas' novel "Notebooks of the Bookseller", which won this year's Booker International Prize for Arabic Fiction, was celebrated at a symposium during the ... END_OF_DOCUMENT_TOKEN_TO_BE_REPLACED

Winner of the Student Oscar: a little girl in a bombed-out flat in Syria. The television is her only window to the world – but even this is taken away from her. Nikolas Fischer ... END_OF_DOCUMENT_TOKEN_TO_BE_REPLACED

While Bashar al-Assad is still shunned by the West, which blames him for a decade of brutal war in Syria, a shift is under way in the Middle East, where Arab allies of the United ... END_OF_DOCUMENT_TOKEN_TO_BE_REPLACED

Comments for this article: A Dalek in a Burqa

Trace of an Egyptian author

An excellent article, and I'm happy to find a trace of Waguih Ghali in it - an exceptional author and man! Not much is known about Waguih Ghali. Ghali was born and raised in Cairo. His exact birth date is not known, but it is guessed he was born in the 1930’s to a upper class Coptic family in Egypt. Ghali’s family spoke English and French more than Arabic. When he was young, Ghali’s father passed away leaving Waguih behind as the poor relation to his mother’s rich family. Once he grew up he funneled his outrage at the poverty in Egypt towards the Communist party. As an adult Ghali left Egypt to study and work in Britain, France, Sweden and Germany.
“Beer in the Snooker Club” was his only novel which now appears to be an exaggerated dictation of his life. Waguih Ghali committed suicide in 1969. Much of his life in London and up until his death is described in "After a Funeral" by Diana Athill.
In "After a Funeral" Dianna Athill describes how she meet Waguih Ghali, whose alias in the novel is "Didi". According to Diana Athill, Waguih Ghali was a sweet and intelligent man. He was an Egyptian exile though and through that information she discovered a darker side to the talented writer. Ghali was an intense gambler, drinker, and womaniser. He committed suicide in the flat they shared in London. When he died he left behind a set of notebooks. In these notebooks Waguih Ghali wrote that his death was the "one authentic act of my life."

END_OF_DOCUMENT_TOKEN_TO_BE_REPLACED
Social media
and networks
Subscribe to our
newsletter