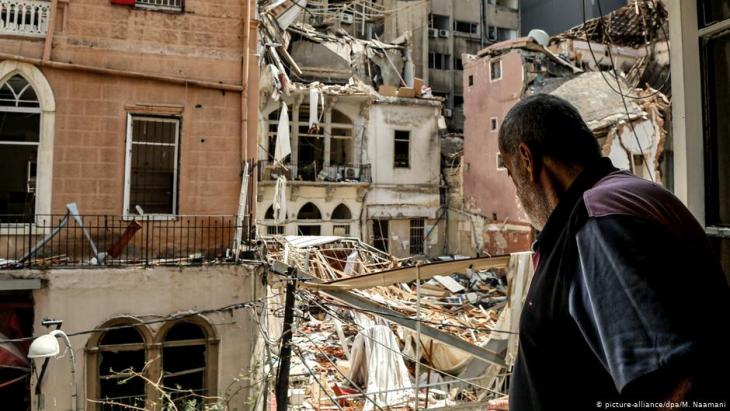 In Lebanon, collective trauma is obvious. The explosions in Beirut on 4 August will have triggered memories of the civil war in many people. By understanding how individual and social identities are influenced by the past, peace work can help contribute to the healing process. By Miriam Modalal and Dalilah Reuben-Shemia

The Lebanese civil war, which lasted from 1975 to 1990, left many wounds unresolved and resulted in a fragmented society with deep sectarian divides. The end of the civil war was followed by a collective suppression of memories about the past three decades. The state promoted this process with the hopes of creating a sense of normality. This may have primarily numbed the pain, yet it failed to deal with the deep wounds of loss, shame and despair.

Collective narratives of victimhood were passed on within fragmented communities. The past remains taboo for school history books and open public discourse has been silenced. Instead, migrants and refugees, not to mention foreign powers, are scapegoated as being the overriding threat to security and the reason for social and political misery. A language of fear and mistrust has given political parties a platform to manipulate the collective need for safety and security.

Recent events of a massive nationwide uprising, which started in October 2019 and is known as the October Revolution, called these realities and heteronomous identities into question. Following a government announcement to tax Internet voice calls, protesters all across the country rose up, demanding an end to corruption, clientelism and the lack of accountability.

The October Revolution led to a collapse of the government, while the country has suffered several months at the brink of financial bankruptcy. A divided society – where many had remained silent for so long – was unified in calling for a root-and-branch transformation of the social and political make-up of Lebanon. It was the end of a prolonged period of collective paralysis.

Peace work that responds to trauma

Entire communities can be traumatised by violent conflicts and the traumas can be passed on from one generation to the next. In Lebanon, collective trauma­ is obvious. With its projects on "Dealing with the Past", forumZFD, a German peace organisation working within the Civil Peace Service programme, uses multi-perspectivity – the idea that history is interpretational and subjective – to engage people in conversations about the past. It thus contributes to a healing process of collective trauma through understanding how individual and collective identities are influenced by the past.

During its "Memory of War" training series, peace activists from various conflicted communities reflected on collective narratives of identity and mind-sets influenced by the consequences of the civil war. In light of events surrounding the October Revolution, the activists explored the importance of a healthy mourning process.

This is prerequisite for breaking the deadlock of mind and body that exists when trauma – resulting in collective emotions of fear and despair – remains unresolved. The activists were encouraged to look at current conflicts in their communities through a multi-perspective lens and acquired techniques to address the past in the present.

Lebanon: from amnesty to amnesia – Lacking a culture of remembrance

Home
Print
Newsletter
More on this topic
Lebanese protesters call for systemic change: What now for Beirut, once the Paris of the Middle East?Interview with Lebanese political scientist Bassel Salloukh: Will a new Lebanon arise from the ashes of Beirut?Beirut in crisis: Can things get any worse for the people of Lebanon?
Related Topics
Abdul Fattah al-Sisi, Confessionalism, Democracy and civil society, Hezbollah, Lebanese Civil War, Minorities in the Muslim world, Refugees, Saad Hariri
All Topics

When is it and when is it not acceptable to display a political banner at the World Cup in Qatar? The answer seems to depend largely on the political message, with fans ... END_OF_DOCUMENT_TOKEN_TO_BE_REPLACED

The Kurds are under attack from two sides: from Turkey, and from Iran. The situation in their territories in northern Iraq is becoming increasingly desperate. Birgit Svensson ... END_OF_DOCUMENT_TOKEN_TO_BE_REPLACED

Iranians do not want an Islam that interferes. They are fed up with a system that manipulates people with simple promises of salvation and anti-Western propaganda. Islamic ... END_OF_DOCUMENT_TOKEN_TO_BE_REPLACED

"The Voice of Dust and Ash" draws us into the life and times of Iranian maestro Mohammad Reza Shajarian with passion and joy, focusing on the man who stood, and still stands, for ... END_OF_DOCUMENT_TOKEN_TO_BE_REPLACED

November 2022 sees the Arab world firmly in the spotlight with the COP27 in Egypt and the FIFA World Cup in Qatar. Public trust in MENA governments is weak, thanks to their ... END_OF_DOCUMENT_TOKEN_TO_BE_REPLACED

In Iran, two famous actresses, Hengameh Ghaziani and Katayoun Riahi, were arrested recently. These days anyone who shows solidarity with the protesters is a target to be silenced ... END_OF_DOCUMENT_TOKEN_TO_BE_REPLACED
Author:
Miriam Modalal & Dalilah Reuben-Shemia
Date:
Mail:
Send via mail

END_OF_DOCUMENT_TOKEN_TO_BE_REPLACED
Social media
and networks
Subscribe to our
newsletter