Overshadowed by multiple crises, climate talks kick off in Egypt 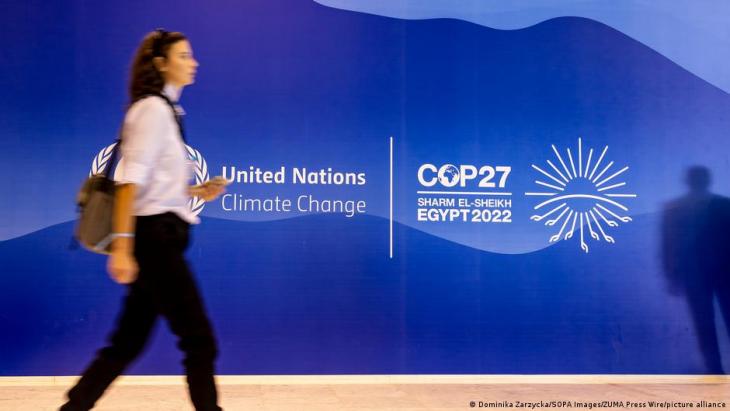 A major UN climate conference is underway in Egypt amid geopolitical tensions and crises that have dimmed expectations for breakthroughs on reducing global warming.

The two-week gathering, known as COP27, is being held in the Egyptian Red Sea resort of Sharm el-Sheikh against the background of the Ukraine war, which has sent food and energy prices soaring and put economies worldwide under stress. The conference also comes after natural disasters have taken a huge toll on lives and livelihoods in several parts of the globe.

Taking the presidency of COP27, Egyptian Foreign Minister Sameh Shoukry on Sunday urged countries to enhance their "collective, multilateral work" on climate change. "We have seen over the year painful events in Pakistan, our African continent and various parts of Europe and the United States. These events and their resulting devastation represent a wake-up call resonating across our planet to move urgently to take all necessary measures to implement our pledges," he said.

The COP27 conference was taking place as political tensions "cast a long shadow on all our nations", Shoukry said.

Representatives from around 200 countries are set to grapple with how global warming can still be contained and how to mitigate the financial costs of climate change, mainly for vulnerable countries. The goal is to limit warming to 1.5 degrees Celsius, as stated in the 2015 Paris agreement.

According to the UN's Intergovernmental Panel on Climate Change, CO2 emissions need to be cut 45% by 2030, compared to 2010 levels to meet this goal by the end of this century.

In a significant step, COP27 delegates on Sunday officially agreed to place the contentious issue of loss and damage funding on its agenda. Developing countries had pressed for the creation of a financial mechanism for addressing loss and damage caused by climate change to assist poor countries unable to cope with climate-related adaptation.

UN Climate Change Executive secretary, Simon Stiell, Sunday said having the item on the COP27 agenda bodes well. "What I will encourage and will hope is that parties continue in that spirit of finding common areas to agree on," Stiell said at a joint press conference with Shoukry.

The Egyptian official hailed the step as a success, but cautioned against early speculation. "It would be highly unproductive to speculate what substantive consultations of the negotiating process will lead to," he said

Ani Dasgupta, president of the World Resources Institute, a non-profit organisation based in the U.S., said the move cleared a "historic first" hurdle. "At long last, providing funding to address losses and damages from climate impacts is on the agenda of the UN climate negotiations", Dasgupta said in a statement.

In the build-up to the conference, Egypt warned stakeholders against backtracking on previous promises.

In 2009, the developed countries pledged to provide ê100 billion a year in finance by 2020 for climate protection in poor countries. The pledge remains largely unfulfilled.

Alongside the negotiations is a two-day summit of world leaders in Sharm el-Sheikh starting on Monday, seen as a bid to provide much-needed political momentum. About 110 heads of state and governments will attend, Stiell said om Sunday. They include German Chancellor Olaf Scholz. U.S. President Joe Biden is expected later in the week.

German Foreign Minister Annalena Baerbock on Sunday described curbing global warming as her government's highest priority. "Humanity is moving towards a precipice, towards global warming of more than 2.5 degrees (Celsius), with devastating effects on our life, on the only planet that we have," she said.

The talks in Egypt mark their return to Africa after six years, with COP22 held in Morocco in the north of the continent in 2016.    (dpa)

More on this topic
Climate change in Egypt: Alexandria or the sea?Climate crisis and over-population: The Arab world has no answersEgypt's food crisis: Wheat from the desert?Climate conference in Marrakesh: A golden opportunity?
Home
Print
Newsletter
MoreAll Topics

END_OF_DOCUMENT_TOKEN_TO_BE_REPLACED
Social media
and networks
Subscribe to our
newsletter