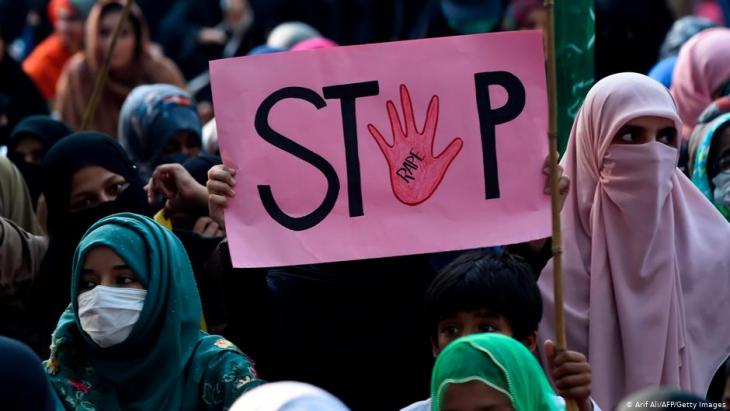 Cases have been registered against 400 unidentified people after a viral video showed a woman being assaulted at Minar-e-Pakistan on the country's independence day.

A young woman was assaulted by a massive crowd of over 400 people as she and her friends visited a national monument in Pakistan’s eastern city of Lahore on the country’s independence day.

In a video that went viral days after 14 August, Pakistan’s Independence Day, hundreds of men could be seen picking up the woman and throwing her up in the air. It has drawn condemnation across the country, which has been struggling to deal with violence against women.

"I was stripped and my clothes were torn apart," she said, according to a report by local newspaper The Express Tribune. She was filming a video at Minar-e-Pakistan with some of her friends when the attack took place.

She said gold jewellery, her mobile phone and cash were "forcibly taken" by people in the crowd.

PM @ImranKhanPTI personally spoke to IGPunjab, police is catching all culprits involved in manhandling of female tiktoker in Lahore & those damaging statue of Ranjit Singh at LahoreFort.
These are gross violations of laws & social norms, govt won’t spare a single person involved.

Local police registered a case against 400 unidentified assailants under several sections of the country’s criminal code, including assault or use of criminal force against a woman and stripping her of her clothes, theft, rioting and unlawful assembly. Non-bailable clauses have also been added.

Pakistan’s Leader of the Opposition in the National Assembly Shehbaz Sharif condemned the incident on Twitter: "What is more worrying is the direction our society is headed in. The recent anti-women incidents are a reminder that malaise is deep-rooted."

While assaulting a woman at Minar e Pakistan, the hundreds of men involved filmed themselves. Thanks to to the abundance of video evidence, can we expect over 400 arrests to be made in Lahore without delay? @PunjabPoliceCPO

He was joined by several other politicians and public figures including activists, celebrities and members of civil society.

I can’t believe what I just saw!!! I’ve said it before and I will say it again - make an example out of these men!
#MinarePakistan

While many condemned the act, several people also took to Twitter to blame the victim and trend "#NotAllMen".

Recent cases of violence against women have triggered a debate about Pakistan’s failure to protect women, a culture of impunity, and the reasons behind society's tendency to curtail women's independence and inflict pain on them.

Pakistan currently ranks as the sixth most dangerous country in the world for women and is currently witnessing a rapid rise in cases of sexual crimes and domestic violence.

Young performers in Lahore are shaping their lives outside the perceptions of Pakistani society, which views many art forms as obscene. As part of a new generation that hopes to ... END_OF_DOCUMENT_TOKEN_TO_BE_REPLACED

The Pakistani Taliban, known by the acronym TTP, are regrouping and reorganising, with their leadership headquartered in neighbouring Afghanistan, according to a U.N. report from ... END_OF_DOCUMENT_TOKEN_TO_BE_REPLACED

Every year in December, the team at Qantara.de takes a look back at the articles that proved most popular with our readers. This year is no different. Here is a run-down of the ... END_OF_DOCUMENT_TOKEN_TO_BE_REPLACED

In 1971, Bangladesh seceded from Pakistan after a bloody civil war to become independent. But the events of that time are still largely taboo today. A reappraisal of this central ... END_OF_DOCUMENT_TOKEN_TO_BE_REPLACED

"American*ish" – co-written by Aizzah Fatima and Iman K. Zawahry, and directed by the latter – is a rom com for an America too many don't want to acknowledge. Whereas most ... END_OF_DOCUMENT_TOKEN_TO_BE_REPLACED

The "War on Terror" has not only failed in Afghanistan, it has exacerbated insecurity and generated more terrorism. This is the main thrust of journalist Emran Feroz in his book, ... END_OF_DOCUMENT_TOKEN_TO_BE_REPLACED
Author:
Seerat Chabba
Date:
Mail:
Send via mail

END_OF_DOCUMENT_TOKEN_TO_BE_REPLACED
Social media
and networks
Subscribe to our
newsletter