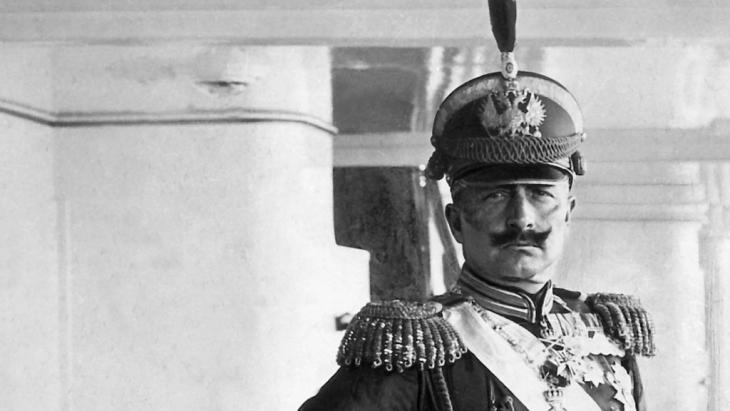 ″Simplicissimus″ and the Palestine issue

Although the barbed satirical content of ″Simplicissimus″ was widely tolerated by the German Empire, the editors went too far with their ″Palestine issue″ which featured a merciless send-up of Wilhelm II and his pilgrimage to the Holy Land. By Christine Pfeilschifter

Enough was enough! It was time to set an example. Arrest warrants were therefore issued for the publisher Albert Langen, the caricaturist Thomas Theodor Heine and the poet Frank Wedekind, who were all charged with ″insulting a royal majesty″ – a law still in existence today as paragraph 103 of the German penal code.

Even as the Kaiser′s court began preparing in the spring of 1868 for the royal couple′s trip to the Holy Land, it was accompanied by wild speculation on the part of the international press. French newspapers conjectured that the German Kaiser wanted to question French claims to Palestine, for example, or was planning a naval base in Haifa.

In his forefathers′ footsteps

The German court meanwhile never tired of stressing the private nature of the pilgrimage. Wilhelm II wanted to follow in the footsteps of his father and grandfather, both of whom had visited Palestine and the holy sites. He also intended to dedicate the Church of the Redeemer in Jerusalem, a construction project initiated by Wilhelm′s father Friedrich III. 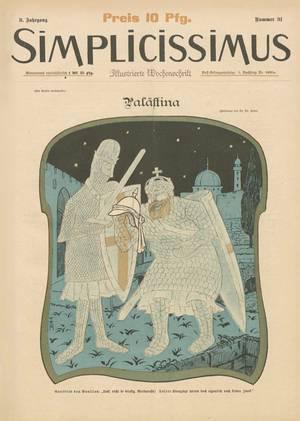 Emperor in the firing line: the cover of the "Palestine issue" shows a caricature by Thomas Theodor Heine, with Kaiser Friedrich Barbarossa doubled over in laughter, clutching a Prussian military helmet, while the crusader Gottfried von Boullion rebukes him with the words ″Don′t laugh like that, Barbarossa! There was no point to our crusades either″

And so the Kaiser and his wife travelled via Constantinople to Palestine that October, visited German settlers in the region, sojourned at the German consulate in Haifa, made a trip to Bethlehem and finally dedicated the new church in Jerusalem. Although Wilhelm II assured the Germans living in Palestine of his solidarity and protection, the trip had no political aspect other than a brief meeting with the Ottoman sultan Abdulhamid in Constantinople.

That did not go unnoticed by Theodor Herzl, who paid a visit to the German Kaiser with a Zionist delegation and tried to win him over to the idea of a Jewish state in Palestine. Here too, Wilhelm II assured the Jewish settlers of his admiration and support for their work, but the German Empire′s alliance with the Ottoman Empire was far too important for foreign policy for him to consider Herzl′s idea seriously.

Back in Berlin, the royal couple′s Palestinian pilgrimage soon began to be mystified by postcards, special editions and even children′s books. Wilhelm II was the first German emperor for 670 years to visit the Holy Land as Kaiser. The last to do so had been the legendary Friedrich II, whereas Wilhelm′s direct ancestors had only made it to the Middle East as crown princes.

From myth to scandal

It was this myth that garnered Simplicissimus′s ridicule. Founded by Albert Langen only a few years previously, the initially tame literary review soon developed into a caustic satirical magazine. Its preferred target, alongside Wilhelm′s policies, was the conservative, militarist society so characteristic of the era. Simplicissimus made the acquaintance of the censorship bodies early on. In Austria, where the magazine was also published, the state banned its fourth issue – Langen had printed a poem by Georg Herwegh, one of the leaders of the 1848/49 revolution and later a co-founder of the German Workers′ Association. Nevertheless, readers and not least the magazine′s editors were surprised at how far they could go with their satire at times.

In the “Palestine issue”, however, they ridiculed the head of state directly. The cover is a caricature by Thomas Theodor Heine, showing Kaiser Friedrich Barbarossa doubled over in laughter, clutching a Prussian military helmet, while the crusader Gottfried von Boullion rebukes him with the words ″Don′t laugh like that, Barbarossa! There was no point to our crusades either.″ As if that weren′t enough, Frank Wedekind mocked the Kaiser′s vanity and crusader allures in the poem ″In the Holy Land″. 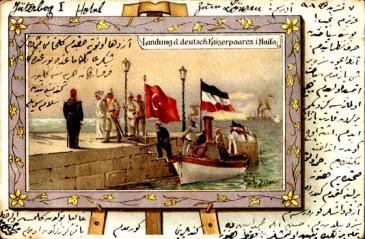 A trip transfigured by history: the royal couple′s Palestinian pilgrimage soon began to be mystified by postcards, special editions and even children′s books. Wilhelm II was the first German emperor for 670 years to visit the Holy Land as Kaiser

The state would not stand for such direct derision of the Kaiser and the issue was confiscated and banned shortly after publication. The state prosecutor′s office also issued arrest warrants for the publisher Albert Langen, the caricaturist Thomas Theodor Heine and an unknown party, as Frank Wedekind had written his poem under a pseudonym. The charge was ″insulting a royal majesty″. While Heine handed himself in to the authorities and Langen fled to Paris, Wedekind was not unmasked until a search of the Simplicissimus editorial office in Munich. He too managed to escape to Paris. Plagued by his conscience, however, Wedekind soon decided to hand himself in and returned to Germany. He and Heine were found guilty of insulting the Kaiser and given prison sentences, which they served at the Konigstein Fortress in Saxony.

Whereas Wedekind and Heine were pardoned after some six months, Langen stayed in his Paris exile until 1903 and was not allowed to return to Germany until he had paid a fine of 30,000 marks. The scandal over the ″Palestine issue″ made all three men legends in German newspaper history, as well as doubling Simplicissimus′ print run.

Home
Print
Newsletter
More on this topic
Germans and Ottomans in the First World War: A partnership of privilegeQantara dossier: "Caricatures, satire and Islam"The 100th anniversary of Karl May's death: Literary genius or man of legendary hubris?
Related Topics
Colonialism, History of the Near and Middle East, Media in Germany, Satire, Travels in the Orient
All Topics

After at first agreeing to accept the grand prize as "Cultural Personality of the Year" in the Sheikh Zayed Book Award, Juergen Habermas then decided to decline the honour. A ... END_OF_DOCUMENT_TOKEN_TO_BE_REPLACED

At nearly 92, Juergen Habermas is still advocating for a robust and transparent civil society. Now Germany's greatest living intellectual has rejected a book award from the United ... END_OF_DOCUMENT_TOKEN_TO_BE_REPLACED

Philosopher Juergen Habermas was due to be awarded a major Arab prize in Abu Dhabi, but has turned it down following criticism. This decision torpedoes Arab efforts at a ... END_OF_DOCUMENT_TOKEN_TO_BE_REPLACED

Violent and racist crimes are on the up in Germany, according to official statistics on politically motivated crimes. Crimes by right-wing extremists hit their highest levels ... END_OF_DOCUMENT_TOKEN_TO_BE_REPLACED

In his book "Ground Zero: 9/11 und die Geburt der Gegenwart" (Ground Zero: 9/11 and the Birth of the Present) Islamic scholar Stefan Weidner analyses the consequences of the ... END_OF_DOCUMENT_TOKEN_TO_BE_REPLACED

Among Muslims, the image of women as "cossetted hijab-wearing princesses" is frequently invoked. But Muslim women have long wanted to be more. In her essay, Karoline Roscher- ... END_OF_DOCUMENT_TOKEN_TO_BE_REPLACED
Author:
Christine Pfeilschifter
Date:
Mail:
Send via mail

END_OF_DOCUMENT_TOKEN_TO_BE_REPLACED
Social media
and networks
Subscribe to our
newsletter