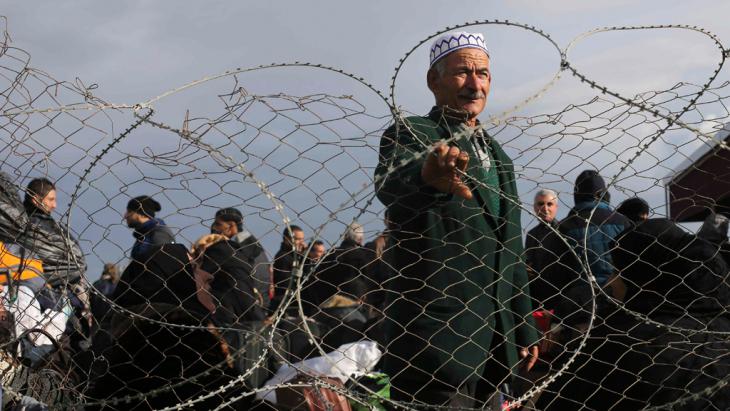 Palestine and its Arabic neighbours
Gaza – a city no one wants

The Gazans have been abandoned and left in the hands of Hamas to do with them as they please. This policy is transforming Gaza slowly but steadily into a hotbed of radicals. By Abdalhadi Alijla

As Palestinians commemorate the 68th anniversary of the Nakba, "catastrophe" in Arabic, when the indigenous people of Palestine were driven into exile and the Israeli state was established, a new Nakba is taking place. This new Nakba is the political division between Hamas and Fatah.

The day-to-day life of the people of Gaza is best represented by the running joke: “Police have arrested a Gazan who has hope”. No hope. No future.

The Rafah crossing between Gaza and Egypt recently opened for two days after a three-month closure. Registered travellers numbered at more than 30,000, but Egyptian border security only allowed 747 into Egypt.

A journey, which under usual circumstances should only take five minutes by bus or one hour, including bureaucratic procedures, now takes over 24 hours and sometimes even 48 hours, leaving hundreds of Palestinians in prison-like areas inside the Egyptian side of the Rafah border, a violation of basic human rights.

Egypt ruled Gaza from 1948 until 1967. Since then, Gazans have attended Egypt′s universities, creating a strong bond with Egypt over time. Nowadays, Egypt′s narrative has changed and Gazans are treated as enemies. 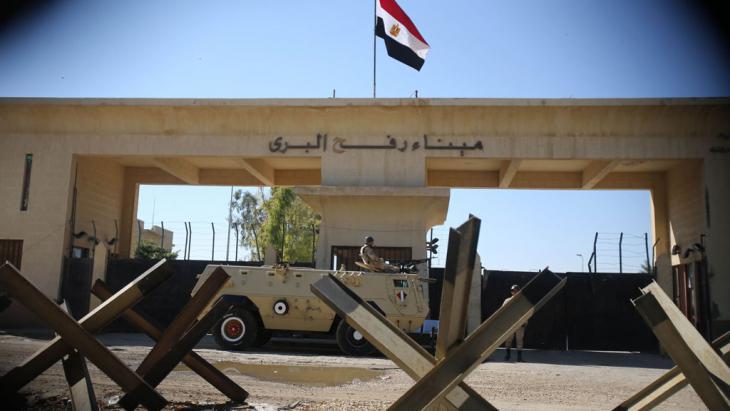 Personae non gratae: the only remaining road out of the besieged Gaza Strip that is not under Israeli control has been mostly closed since the ousting of Morsi in Egypt. During the whole of 2015, Rafah only opened on 21 days to allow a limited number of travellers on urgent business to pass through

Last year I was banned by Israeli security from going to Palestine, yet I received much better treatment than my fellow Palestinians in Egyptian airports and borders. What makes this especially difficult to bear is the fact that Palestinians have never had any conflict with the Egyptian army, compared to Jordan, Lebanon and Syria.

The question therefore needs to be asked: why is Egypt treating Palestinians from Gaza so badly? Why does Egypt treat Palestinians as sub-human? Even if it is the norm in Egypt for the government to deal with its own people in such a manner, why is this treatment extended to Palestinians when all they ask is to cross the border to travel onto somewhere else?

It seems that Egypt is intent on sending this strong message to all parties: ′We are not interested in Gaza, Gazans or their troubles; let them suffer away from us′.

Gaza′s burden is not limited to its southern border, it also extends to Jordan. When the Israeli military started to allow Gazans to travel through Jordan, after receiving military permission to cross from the West Bank, Jordan tightened its security measures. Not only did they deny visas for Gazans living in Gaza, but also for Gazans who live in the West Bank. The decision came immediately after Israel′s decision to condition Gazans′ exit to a one-year no-return, which is a violation of their human rights. Due to Israel′s decision, Jordan may have felt that a decision was made to hand Gaza to Jordan.

One rule for them, another for the rest

However, this does not explain the need for Gazans to obtain visas while their counterparts in Jordan can travel whenever they want. Gaza has traditionally been aligned with Egypt and the West Bank with Jordan, so perhaps Palestinians of the West Bank are trusted more than Gazans? This reinforces the premise that Gaza is being treated as a security issue and, by extension, Gazans are seen as a threat to Jordan. 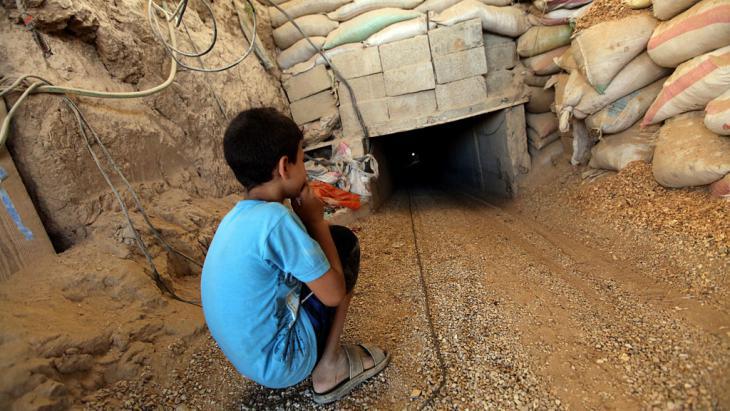 Policy of isolation: at the end of 2014, fearful of Islamists penetrating the Sinai Peninsula, Egypt began creating a buffer zone along its border with the Gaza Strip. It had already previously destroyed several hundred smugglers′ tunnels leading out of the Palestine enclave, which has been under the control of the radial Islamic Hamas since 2007. Last summer, the Egyptian army began flooding the area where tunnels were still believed to exist with seawater

Israel too plays a crucial role for Gaza. It has been besieging the Gaza Strip for ten years now; its army murdering more than 5000 Palestinians between 2008 and 2014 over the course of three assaults. Israel would ultimately like to annex the West Bank, leaving Gaza as the state for the Palestinians. In 1987 Martin Gouterman suggested Gaza become the Singapore of the Middle East.

In 2004, to avoid negotiations, prevent discussions on refugees, Jerusalem and borders, Sharon′s plan was to stop the creation of a Palestinian state and allow a state in Gaza. The Israeli government is ready to do everything possible to rid itself of Gaza or keep borders closed indefinitely. The issue is not only Hamas, but also the history of the relationship between Gazans and the Occupation.

The same goes for the Palestinian Authority (PA) and Fatah′s leadership in Ramallah. They are not interested in taking Gaza back from Hamas. Despite the fact that they are willing to negotiate with Hamas over reconciliation and Hamas′ manipulation of national and regional efforts, the PA′s leadership cannot guarantee positions, diplomatic employees and governmental advantages neither for Hamas, nor for Gazans.

In Ramallah and among the Palestinian leadership, Gaza is treated like a contagious disease. This perception is reflected by the appointment of high-level employees only in Ramallah. Non-Gazan high-ranking employees are the only ones appointed and funded. This reveals a hostility not only toward Hamas but also toward Gaza in general, as the Gaza Strip and the West Bank are systematically regarded not as one entity, one people and one future-state. 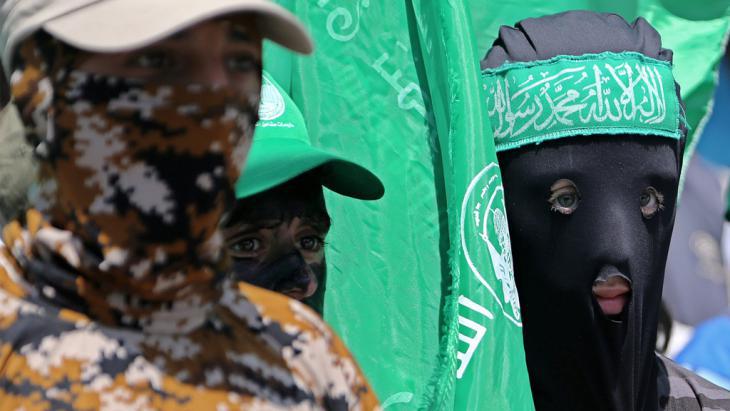 Grist to the radicals′ mill: "the division between Hamas and Fatah, the siege on Gaza and the stubborn leadership of Hamas have all led to catastrophic consequences in the Gaza Strip: high unemployment, increased rates of suicide, shortages in power, water and medical supplies, hardships in general wellbeing, higher rates of poverty, a crushing siege of the Gaza Strip, increased taxes on necessary goods (imposed by Hamas), corruption, distrust, higher political repression and arbitrary arrests among Gazan activists," writes Abdalhadi Alijla

At the mercy of Hamas

It seems that the Gazans have been effectively abandoned and left in the hands of Hamas to do with them as they please. This policy is transforming Gaza, slowly but steadily, into a hotbed of radicals that is bound to explode.

The division between Hamas and Fatah, the siege on Gaza and the stubborn leadership of Hamas have all led to catastrophic consequences in the Gaza Strip: high unemployment, increased rates of suicide, shortages in power, water and medical supplies, hardships in general wellbeing, higher rates of poverty, a crushing siege of the Gaza Strip, increased taxes on necessary goods (imposed by Hamas), corruption, distrust, higher political repression and arbitrary arrests among Gazan activists.

To avoid such an outcome, action must be taken and now. The world should not regard Gaza as a humanitarian crisis, but rather a political crisis. The PA must deal with Gaza as an entity that belongs to them and represent the interests and needs of its people.

The PA works for a limited group of people who are becoming the new elite of Gaza, while the great majority continue to suffer every day. Egypt and Jordan should also rethink how they deal with the population of Gaza. Not all are a security threat; in fact, none of them need pose such a threat if they are granted access to basic human rights.

Writer and activist from Rafah, Mahmoud Jouda, wrote the following on his Facebook page:

"Do not listen to anyone who says there is hope in Gaza. Even if we achieve political reconciliation, it will not work because it is based on a quota-based political division which will fail. Gaza′s problem is bigger than its geographical borders. Gaza is a sinking vessel. The only solution is individual salvation. Jump from the sinking vessel before you die."

This is the painful reality of Gaza and the story of a city that no one wants.

Abdalhadi(Hadi) Alijla is a research fellow at the University of Milan and the executive director of the Institute of Middle Eastern Studies Canada (IMESC). He serves as the regional manager for Gulf countries at Varieties of Democracy Institute, Gothenburg University, Sweden.

Home
Print
Newsletter
More on this topic
Investigations into the 2014 Israel–Gaza conflict: What prospects for accountability in Gaza?"The Blue Between Sky and Water" by Susan Abulhawa: Love and suffering in GazaBook review: "The Drone Eats with Me" by Atef Abu Saif: A war without distinct edges
Related Topics
Egypt's army, Fatah, Gaza War, Hamas, Human rights, Israeli-Palestinian conflict, Palestinian Authority
All Topics

Palme d’Or winner "Boy from Heaven" is a classic crossover film in which cultural elements are mixed together in haphazard and random fashion. Shady Lewis Botros bemoans the ... END_OF_DOCUMENT_TOKEN_TO_BE_REPLACED

In Doha, Arabs from Morocco, Tunisia, Egypt and Algeria are gathering to celebrate the first ever FIFA World Cup to be held on Arab soil. The criticism from Europe? Over the top, ... END_OF_DOCUMENT_TOKEN_TO_BE_REPLACED

November 2022 sees the Arab world firmly in the spotlight with the COP27 in Egypt and the FIFA World Cup in Qatar. Public trust in MENA governments is weak, thanks to their ... END_OF_DOCUMENT_TOKEN_TO_BE_REPLACED

COP27 in Sharm el-Sheikh is turning into a PR disaster for Egypt’s military regime. Instead of praise for the host, the news is full of solidarity for imprisoned activist Alaa ... END_OF_DOCUMENT_TOKEN_TO_BE_REPLACED

END_OF_DOCUMENT_TOKEN_TO_BE_REPLACED
Social media
and networks
Subscribe to our
newsletter