Galleries around the world have been exhibiting Palestinian art for many years now, yet it does not have the power to create alternative political or social concepts. Kersten Knipp surveys the Palestinian art scene 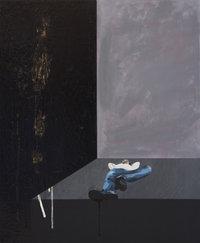 ​​ He lies stretched out, arms crossed beneath his head, one leg bent, the other leg extended. Exactly as people lie when they have time to relax; in summer, for instance, when the weather's warm, and they just want to enjoy the sunshine. What a shame, then, that he won't be able to relax in this environment. The man is lying on the edge of an abyss. It could be the edge of an oversized table, made of hard wood. Not a place where it's possible to feel comfortable; also because of the two walls, one on the left and one in the background. They loom over him like monoliths, one black, the other grey. So why is this person lying there? It surely can't be in order to relax. Perhaps he can't get away from this place; perhaps he's confined here, has been hurling himself at the walls and is now exhausted. Is he a prisoner?

Godot in the West Bank

"Waiting #02" is the name of the painting by the artist Hani Zurob, born in Rafah in 1976. The situation depicted on the painting can be interpreted in many ways: as universally human, in the best existential tradition. But it can also be interpreted politically. And when a Palestinian artist paints a scene like this, the reference that immediately suggests itself is to the situation in Gaza and the West Bank. Inevitably, the reclining figure then reminds the viewer of the unemployed men we so often see on television, usually sitting in cafés, chatting, playing cards or chess, killing time, one way or another. An artistic commentary on the hopeless situation in the Palestinian territories, then, where for some people the passage of time is as miserably slow as in Salvador Dalí's pictures of the melting clocks?

Hani Zurob, who now lives and works in Paris, is enough of an artist to leave the interpretation open, as in all his other works. A child riding a toy car in front of a grey surface: it could be a wall, it could be the wall. 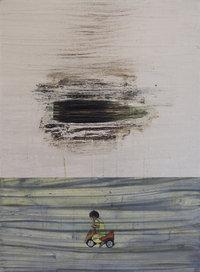 Open to interpretation: In Zurob's "Flying Lesson #02" a child is riding a toy car in front of a grey surface: it could be just any wall, but it could also be the Israeli West Bank barrier

"Flying lesson #02 (Gravity)" is the title of this work, painted in 2009. No carefree childhood this. "Standby", a series of painted-over portraits from the same year lso lend themselves to a political interpretation: people without faces, as if they are wearing masks. Faceless people, figures that lack all individuality. Palestinians as a collective political plaything?

It can be understood in this way, but it doesn't have to be. A fundamental element of art is that it is also the art of ambiguity. And Hani Zurob's art is ambiguous, for it points not only in the direction of Palestine but also in the direction of Western Modernism. One is reminded of the haunting image in Edvard Munch's "The Scream", of the maltreated figures in the works of Max Beckmann, of the deformed, grotesque faces painted by Francis Bacon. All of them artists who were open to horror, whatever its source: the self, battling with its inner demons, perhaps even helpless in their grasp; or it may have an external source, the result of politics gone awry.

In any case, art devoted to horror has long since established its norms, has become "global art". Its aesthetics transcend all boundaries, they are comprehensible to all. In Palestine, too, this style of art was adopted quite some time ago.

But on the other hand: is it possible to express oneself otherwise? Is the political art of earlier years still convincing? Apparently not. The "activist" art of someone like Abdul Hay Musallam, who became a chronicler of the Palestinian resistance, has for the most part had its day. "Al sumud" ("Steadfastness") was a heroic epic created in 1983 and dedicated to the fighters of Ain al-Hilweh, the biggest Palestinian refugee camp in Lebanon, which had been attacked the previous year by the Israeli army. But heroic images like these are rarely seen in contemporary Palestinian art. 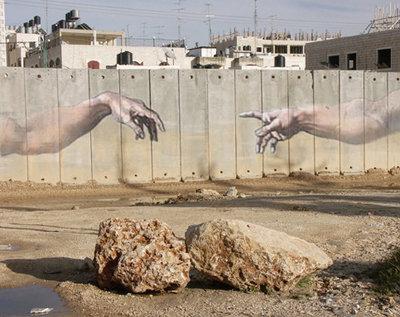 God keeps his distance: Whereas in Michelangelo's Renaissance masterpiece the Creator and his creature were almost able to join hands, in Ramallah the fingers of God and Adam are several metres apart: Suleiman Mansour's Ramallah graffiti

​​ No, indeed – artistic exhortations to the people to stand firm are scarcely to be found in contemporary Palestinian art; how could they be? The peace process with Israel has stagnated, the West Bank can barely hold its own against its more powerful neighbour; it is forced to acquiesce to bitter territorial losses as a result of settlement building. Added to this, the Palestinians themselves are divided, split into the opposing camps of Fatah and Hamas. Disillusionment abounds, and this is mirrored in the works of Palestinian artists. Their art is clearly post-heroic; in these leaden times, they express themselves in laconic touches.

The warning sign for an Israeli checkpoint glows in soft, pastel colours in a work by Jad Salman, born in Tulkarem in 1983 and now living in Paris: it has those gentle tones familiar from the Mediterranean landscapes of August Macke, Paul Klee or Henri Matisse – an ironically stylised idyll, simulating a picturesque charm of a kind that, in the West Bank, no longer exists. Nature has been transformed into piecemeal administrative districts drafted on the drawing boards of politics. A wall several metres high eats its way along the border, dividing what its architects believe should forever be kept asunder.

Not even the Almighty could get anywhere with a situation like this – or so, at least, we are given to understand by Suleiman Mansour (b. 1947 in Birzeit). He has painted the outstretched fingers of God and Adam on the separation wall in Ramallah – the central image of that great painting once created by Michelangelo for the ceiling of the Sistine Chapel. Yet whereas in the Renaissance masterpiece the Creator and his creature were almost able to join hands, in Ramallah the fingers of God and Adam are several metres apart. In Palestine, even a simple handshake is clearly beyond the bounds of possibility.

The horrors of war 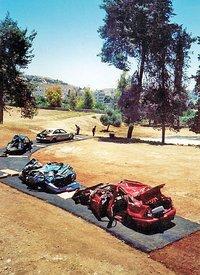 A criticism of the disposable society or an allusion to the violence in the Middle East? Vera Tamari's 2002 installation "Going for a Ride"

​​And when encounters do take place, they are often not entirely smoothly. Not, at least, as depicted by the artist Vera Tamari, born in Jerusalem in 1945, now living in Ramallah. "Going for a Ride" is the title of her installation from 2002, which displays four flattened automobiles lined up neatly alongside each other. In the West, this would be read as a criticism of the disposable society – in Palestine, however, it provokes associations with unfortunate encounters with Israeli tanks, incidents on that "road to nowhere" that leads out of Tamari's artwork and into nothingness.

The Jerusalem-based artist Rula Halawani highlights the Israeli-Palestinian conflict in an even more direct, brutal, immediate way than Tamari. "Negative Incursion" is the title of her series of negative prints, from photographs taken in 2002 during the five-week siege by Israeli troops of the Church of the Nativity in Bethlehem. The horrors of war reveal themselves here in drastic form.

Palestinian art documents reality, and simultaneously reveals a lot about itself. It is highly political, and simultaneously jaded in the extreme – at least in the sense that it is unable to oppose a too large a reality with any spaces of its own. Art does not lead to a better world; all that is left to it is the escape into irony and laconic commentary.

On the other hand: who still looks to art for redemption these days? Transcendence as a category is well past its sell-by date. Ideally, art may be set up in opposition to reality. However, faced with a reality that is overpowering it can do little more than simply bear witness to it. It adopts the function of chronology. It is unable to believe in better worlds. It is even less prepared to create them. Kersten Knipp © Qantara.de 2010 Translated from the German by Charlotte Collins Editor: Lewis Gropp/Qantara.de

Qantara.deInterview with Art Historian Salwa MikdadiPalestinian Independence on the Venice Lido
This year, for the first time, Palestine will be showcasing its artistic talent at the Venice Biennale, the world's biggest and liveliest contemporary art extravaganza. Palestinian curator and art historian Salwa Mikdadi managed to put the exhibition together exclusively with Palestinian funding. Interview by Irmgard Berner Interview with Rose Issa"Culture Should Not Be Restricted to the West"The Louvre has just signed a lucrative million-euro deal with Abu Dhabi. Critics in France fear a "sell-out" of French culture. In this interview with Lewis Gropp, Rose Issa, independent curator and art critic specialised on Middle East and North Africa, disagrees The Palestinian City of RamallahAn Oasis in a Cultural DesertThe Palestinian cultural landscape is barren. Those who live in Ramallah are relatively lucky, as the city is the lynchpin of Palestinian culture, an oasis in a cultural desert. A first-hand report by Sebastian Blottner Israeli-Palestinian Dialogue Art and the Right to Freedom of Movement An exhibition in a small Arab-Israeli town. With artists from Germany, Israel and the Palestinian territories. Can a project like this be a success? It can indeed! Cornelia Rabitz reports

END_OF_DOCUMENT_TOKEN_TO_BE_REPLACED
Social media
and networks
Subscribe to our
newsletter