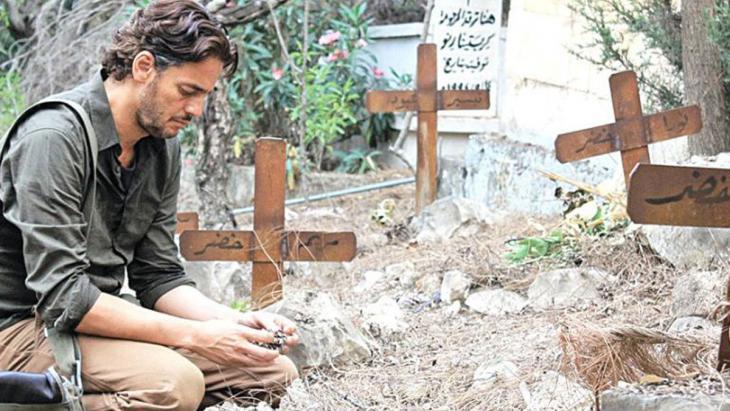 Is he a terrorist or a freedom fighter? Whatever the audience might feel, the main protagonist of the film "Eyes of a Thief" is portrayed first and foremost as a father searching for his lost daughter. The Palestinian-Jordanian director Najwa Nijjar brings us a family drama that doesn't shy away from making political statements. By Laura Pannasch

Water gushes upwards out of a pipe in a big arc like a fountain. The final scene in "Eyes of a Thief" suggests liberation and relief and is in stark contrast to the core themes of the rest of the film, namely the boundaries and lack of freedom of life under Israeli occupation.

The Arabic word for "eye" also means "water source", so even the title refers us to the underlying conflict in the film: the conflict over water. "We have to buy our own water from the Israelis," says director Najwa Najjar. Having made a documentary on the water shortages inside the Palestinian territories, she now presents her first feature film since "Pomegranates and Myrrh", "Eyes of a Thief".

"Eyes of a Thief" premiered in Germany at the Berlinale, but not as part of the actual festival programme. It wasn't the festival curators who invited the director to screen her film in Germany, but the writers of the blog "Al-Sharq" and the Friedrich Ebert Foundation. "European film festival curators are the strangest thing in the world," says Najjar. So far, the only other European showing of "Eyes of a Thief" was as the opening movie at the "London Palestine Film Festival".

A father's search for his daughter 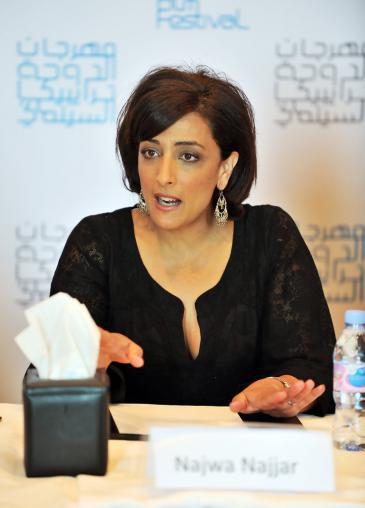 "There's this misapprehension about the Israeli–Palestinian conflict that it's a religious conflict; it's actually a national conflict," says Palestinian-Jordanian director Najwa Nijjar, pictured here at the Doha Tribeca Film Festival in 2009

The film's central plotline is a father's search for his daughter. As he does so, he not only has to fight against the lack of freedom under occupation, but also against social boundaries. Having served a ten-year prison sentence for an attack on Israeli border soldiers, Tarek sets out to find his daughter Malak.

When he eventually finds her in Nablus, however, he discovers that she has been adopted. He can't reveal himself publicly as her father, and so he takes a job nearby working as an engineer for the official in charge of water at the Palestinian National Authority in order to be able to approach her in secret.

Najjar was inspired by a true story that took place in 2002 during the second intifada between Nablus and Ramallah. At that time, the sniper Thaer Hamad murdered seven Israeli border soldiers and three settlers and was given 11 life sentences. Unlike the film's protagonist Tarek, Thaer was not released from prison. The director also opted to give her character a different religion: Tarek is a Christian.

"That was a very clever move by Najwa," says the film's Egyptian star Khaled Abou Naga. Najjar, herself a Christian living in Ramallah, adds that she wanted the film to show that not all terrorists are Muslims. "There's this misapprehension about the Israeli–Palestinian conflict that it is a religious conflict; it's actually a national conflict," she says.

Criticism from Palestinians and Israelis

Changing Thaer Hamad's religion appears unnecessary – and not only to the Western viewers in Berlin either. Najjar was criticised for the change of religion at the world premiere in Ramallah at the end of 2014. According to Najjar, the criticism there all came from older Palestinians who had expected a documentary biography of Thaer Hamad. In any case, she is accustomed to criticism from her fellow Palestinians. After all, her first feature film was attacked by Hamas in particular.

The Israelis, by contrast – according to an article in the Israeli newspaper "Haaretz" – criticised the allegedly glorifying presentation of the murderer Thaer Hamad and suggested in response a film about the mass-murderer Baruch Goldstein. Unlike Goldstein, however, says Najjar, Thaer Hamad did not kill civilians and fought under occupation. She believes he ought to have been sentenced according to different criteria, on the basis of the Geneva Convention.

Najjar feels that a distinction must be made between terrorists and freedom fighters. At the same time, however, she emphasises that she is by no means in favour of violence. It was important to her to present the personal story of the father behind the murderer. She has certainly succeeded in doing so; her film is a testament to great humanity.

"Eyes of a Thief" features several songs by the Algerian singer Souad Massi, who makes her acting debut as Malak's adoptive mother. Arabic-speaking audiences were particularly confused by the fact that an Algerian was playing a single mother in Palestine. Yet according to Najjar, the character is symbolic of the fight for freedom that – unlike Palestine – Algeria succeeded in winning.

Twelve-year-old Malak Ermileh, who came to her role as Tarek's confident, emancipated daughter purely by chance at a casting in the Balata refugee camp, lends the film a heroic note and gives audiences plenty to smile about.

The female characters in Najjar's film are portrayed as strong, modern women. "Women have to be strong in Palestine, perhaps because the men are in prison or have been killed," says Najjar. The Israeli soldiers, on the other hand, often come across as faceless. They are all played by Palestinians. Asked why she didn't use Israeli actors, Najjar replies: "The Israelis already have a huge arena for their actors and their cinema. Why shouldn't we give Palestinians a chance?"

Najjar makes no secret of her frustration over the Israeli occupation, and that is visible in the film. She tells of how the Israeli army attacked the neighbouring Balata refugee camp every day while they were filming in Nablus. Her film depicts an entirely divided society. "That's the reality. That's why cinema shouldn't make the situation look prettier than it is," she says.

By the same token, Najjar doesn't want to show the oft repeated images of a bare and ugly Palestine in her films. "That may be how others see us," she says, adding that she wanted to show the country's beauty in "Eyes of a Thief". She is not quite as successful in this enterprise, however. While the film leaves us with an overriding feeling of oppression, the freely flowing water in the final scene does at least awaken hopes of a life in freedom and dignity.

Essawi Frej, the first ever minister of Arab origin in an Israeli government, explains in interview with Markus Bickel what can be achieved in a coalition of opposites END_OF_DOCUMENT_TOKEN_TO_BE_REPLACED

Hisham's Palace in the West Bank was recently renovated and is now opening to the public. Palestinians hope it will draw tourists. ... END_OF_DOCUMENT_TOKEN_TO_BE_REPLACED

Ibrahim Issa runs an extraordinary school where he prepares Palestinian students for a future of peace. It isn't what he originally planned to do with his life, but as things ... END_OF_DOCUMENT_TOKEN_TO_BE_REPLACED

Sudan is the exception to the rule in the United Arab Emirates’ counter-revolutionary playbook, writes James M. Dorsey. In contrast to Egypt or Yemen, where it went out of its way ... END_OF_DOCUMENT_TOKEN_TO_BE_REPLACED

On 10 September, WDR, the public broadcaster in Germany's most populous western state, introduced the 28-year-old journalist Nemi El-Hassan as the new presenter of its popular and ... END_OF_DOCUMENT_TOKEN_TO_BE_REPLACED
Author:
Laura Pannasch
Date:
Mail:
Send via mail

END_OF_DOCUMENT_TOKEN_TO_BE_REPLACED
Social media
and networks
Subscribe to our
newsletter