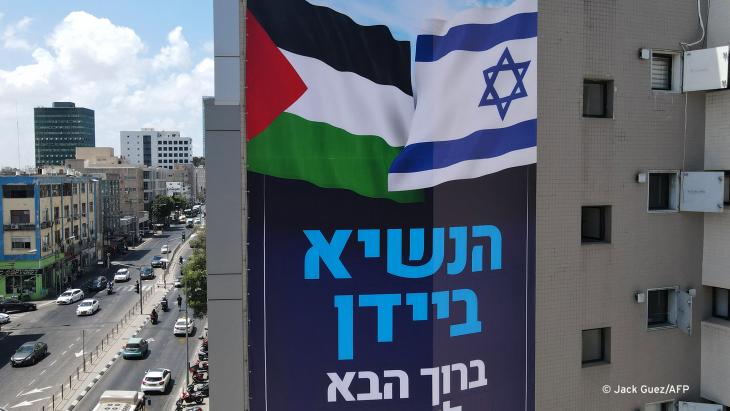 Ahead of Joe Biden's first visit to Jerusalem as U.S. president, Washington's ambassador said his team will "pound tables" to press Israeli officials into making concessions to the Palestinians.

But ambassador Thomas Nides was talking about ensuring Palestinians have access to economic benefits such as 4G internet, not throwing American diplomatic muscle into reviving a peace process moribund since 2014.

Biden's first Middle East tour since entering the White House last year begins in Israel on Wednesday, and he is expected to meet Palestinian president Mahmoud Abbas on Friday in Bethlehem, in the Israeli-occupied West Bank.

U.S.-Palestinian ties have improved under Biden, after hitting an all-time low under his predecessor Donald Trump, a staunch backer of the Israelis.

Along with the prospect of faster internet, the visit may also see the U.S. restore funding to hospitals in Israeli-annexed east Jerusalem, which have historically served Palestinians.

But some Palestinians said they are weary of U.S. diplomacy which, they claim, emphasises economic benefits above core issues of the seven-decade conflict.

"It would be nice to have the 4G," said Mohammed Mostafa, a former Palestinian Authority deputy prime minister and ex-chief executive of Paltel, the largest telecoms operator in the Palestinian territories. "But it's obviously not a substitute for solving the bigger issues like Jerusalem, like sovereignty or like freedom."

"Israel thinks people will forget about the bigger picture," he added.

The 4G pledge, which ambassador Nides highlighted in an interview with the Times of Israel, would offer an immediate boost to Palestinian businesses, Mostafa said.

Palestinians are currently forced to either buy Israeli SIM cards or struggle with slower 3G connections.

"Israeli operators have a significant part of the Palestinian telecoms and broadband market," Mostafa said. "This would be a chance to bring that back to Palestinian companies."

But "the Israelis think 'we're going to give you 4G so you'll keep quiet on the other things," Mostafa added. "We are interested, but we also want bigger things."

Until July 1, Israel was led by prime minister Naftali Bennett, a right-winger who opposed the Palestinians' over-arching demand – the establishment of their own state.

Bennett embraced an approach known as "shrinking the conflict", seeking to defuse tensions by improving economic opportunities in the West Bank and the blockaded Gaza Strip, which is controlled by the Islamist group Hamas.

One such key policy was to increase permits for Palestinians, including from Gaza, to seek relatively lucrative work in Israel.

Asked about the expectations from Biden's visit, Hamas official Basem Naim said: "Nothing."

Yair Lapid, Bennett's replacement as Israeli premier and a centrist, supports a two-state solution to the Palestinian conflict.

But he is only serving as a caretaker leader ahead of elections in November and is therefore seen as having little space to launch bold peace initiatives.

When Lapid visited Paris last week, French President Emmanuel Macron said there was "no alternative to a resumption of political dialogue between Israelis and Palestinians".

Senior Israeli officials have admitted that Lapid was "open" to meeting Abbas, but not to launching a new peace initiative for the moment.

In an opinion piece for the Washington Post at the weekend, Biden asserted that his administration has restored approximately $500 million in support for Palestinians, after Trump slashed funding.

But while Israeli authorities have promised to raise a sea of flags to welcome Biden in Jerusalem, there are few signs of ceremonial anticipation across the West Bank.

For Sam Bahour, a prominent Palestinian-American businessman in the West Bank, apathy about Biden's visit transcends the latest fluctuations in Israeli governance.

"The Biden administration has fallen into the Israeli trap – that trap is fragmenting all of the Palestinian rights under international law, and then using them as playing cards as if they were giving concessions back to the Palestinians," he said.

Backing Israeli initiatives in the West Bank is simply "throwing money at the occupation". Bahour said Palestinians can manage with slower Internet, but not without statehood.

"We don't need 4G," he said. "We need the fourth generation of Palestinians not to live under military occupation."    (AFP)

END_OF_DOCUMENT_TOKEN_TO_BE_REPLACED
Social media
and networks
Subscribe to our
newsletter