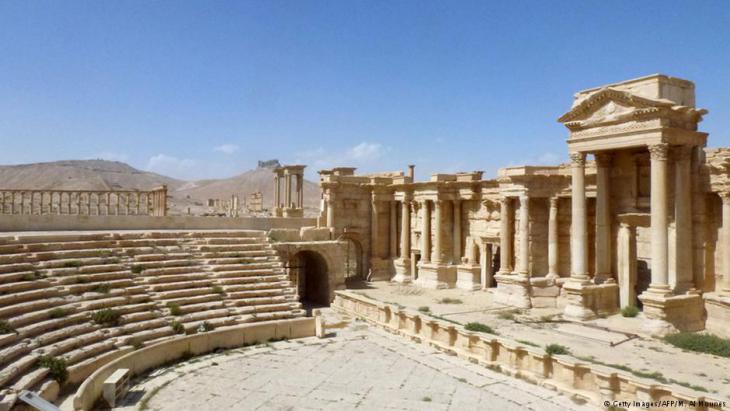 A pawn in Assad's game

For Palmyra, Assad is just as bad as IS. Completely rebuilding Palmyra's destroyed cultural treasures would turn it into a kind of Disneyland, says archaeologist Annie Sartre-Fauriat. Interview by Sabine Oelze

Ms Sartre-Fauriat, what do you know about the current state of Palmyra after it was recaptured by Syrian President Bashar al-Assad's troops?

Annie Sartre-Fauriat: In the past two weeks, I've received many photographs from Syrian archaeologists I know. The pictures show Bashar al-Assad's troops as they survey the ruins. Today, for the first time, I saw pictures from the inside of the former Temple of Bel. That was previously not possible, because it was assumed that mines had been planted there.

Are you relieved that Palmyra has been liberated from "IS"?

Sartre-Fauriat: Yes and no. I'm relieved that the jihadists have been pushed out. They did terrible damage to the World Heritage site in Palmyra. But I'm also not relieved. The memories of what Bashar al-Assad did with the Palmyra ruins are still very much alive. When his army occupied Palmyra Castle during the revolution from 2012 to 2015, he did a great deal of damage. He launched grenades and rockets onto the World Heritage site and destroyed the pillars and walls. His troops plundered graves, looted artefacts and sold them illegally. As long as Bashar al-Assad is in Palmyra, I'm afraid that he could cause further damage and that his people will plunder again.

But the Syrian director of antiquities Maamun Abdulkarim had given the impression that Assad wanted to take care of Palmyra and even help UNESCO rebuild it. 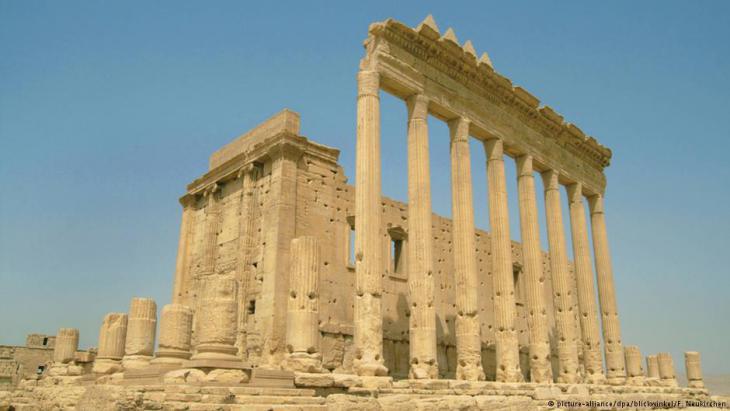 Razed to the ground: this is how the Temple of Bel looked before it was destroyed by the jihadists of IS

Sartre-Fauriat: I know that the press made positive comments about the recapturing of Palmyra, but that doesn't mean the war in Syria is over. That's why I'm not very optimistic about Palmyra. Peace has to return first and the place must be secured before we can even think about rebuilding the site or restoring monuments. I'm in favour of restoring what can be restored, including the huge arch. According to the photos I've seen, it has been damaged but not blown up. I'm doubtful though about the restoration of the Temple of Bel. Only rubble is left of it.

Honestly, I really don't want Palmyra to be completely rebuilt. Just look at how the theatre in Palmyra was restored not too long ago. You can see that new bricks were used everywhere. It lacks authenticity and history. If the same thing were to be done with the Temple of Bel, it would become a kind of Disneyland version of Palmyra. I would definitely want to prevent that from happening.

For 10 months, the world feared that Palmyra was being levelled. Now it appears that only 20 percent has been destroyed.

Sartre-Fauriat: Twenty percent may not sound like not very much. But the terrorists have destroyed the most important World Heritage monuments: the Temple of Bel and the Temple of Baalshamin, which are the two largest and most beautiful structures in Palmyra. They've also destroyed the seven most beautiful burial towers and the arch, as well as many burial sites. The plundering - whether by Assad's troops or the "IS" - has had an impact on sites which archaeologists and historians still wanted to research. This is a loss of historic dimensions. We have to put the 20 percent into perspective: the most valuable 20 percent of Palmyra's World Heritage has been erased. 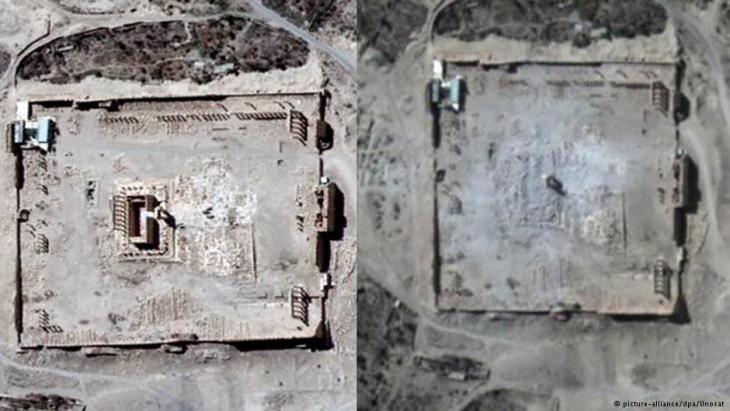 The Temple of Bel in Palmyra: before (left) and after (right) the destruction by IS (photo: picture-alliance/dpa)

Was it "IS" propaganda that made us believe that more of the cultural treasures had been lost?

Sartre-Fauriat: Yes, of course. It cannot be dismissed that in the eyes of the "IS," Palmyra had to be destroyed for two reasons. Firstly, Palmyra is a symbolic site that the West wanted to preserve - although I'd like to point out that the "IS" has also destroyed Muslim artefacts like mosques and mausoleums. And secondly, Palmyra is a symbol for Syria. It's printed everywhere - on stamps and on currency.

Is Bashar al-Assad trying to profit personally from the recapturing of Palmyra?

Sartre-Fauriat: When Assad more or less handed Palmyra over to "Islamic State" in May 2015, it was an intentional political move. His strategy was that the West would come help him fight IS. But it didn't happen, because of course the West didn't want to help a dictator like Assad. That's why it was very important to him for Palmyra to fall into the hands of IS. Assad's troops defended the city against IS for 48 hours and then just withdrew - after grabbing important documents from the archives and releasing the prisoners from the castle fortress. The situation now is similar: Assad did manage to get Russia and Hezbollah on his side to free Palmyra and celebrate himself. He's hoping to rehabilitate himself with the UN and be accepted again as a negotiation partner. It's a political manoeuvre.

Is it just political tactics? 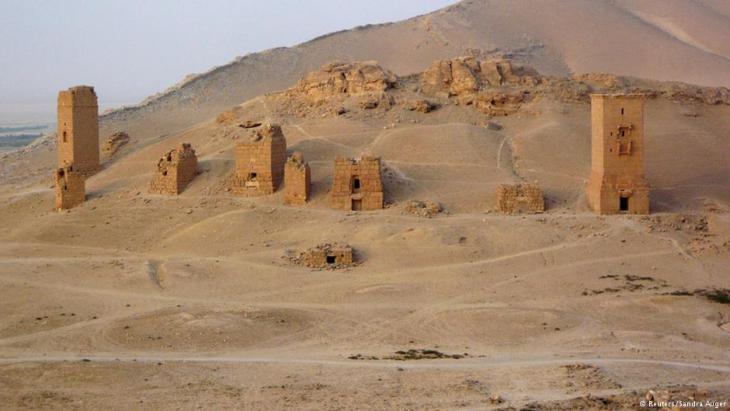 Sartre-Fauriat: Assad lies whenever he opens his mouth. I've known the Syrian system for more than 40 years. When I first went to Syria in 1971, I came into contact with the regime of Bashar al-Assad's father and was in the country when the government passed from father to son. I was in Syria at the beginning of the revolution in 2011 and I got to know Bashar al-Assad as a manipulator and deceiver. His only goal is to stay in power, so Syria stays as he wants it. He views Syria as his possession and is prepared to do everything to keep it. He had no problem massacring 300,000 people, exiling millions of Syrians and torturing and killing prisoners. If the West wants to negotiate with him, they'll have to bring a big spoon to fill his stomach, because they will be sitting at the table with the devil himself. It makes me very sad to watch.

Will it be possible to rebuilt Palmyra in five years?

Sartre-Fauriat: I think that's unrealistic. Without help from abroad - that is, from UNESCO - it won't be possible. I've spoken with UNESCO Director General Irina Bokova about it and she wants to see the situation for herself in Syria and is cautious about making promises. But on the other hand, the question is whether Palmyra is at the top of the priority list when it comes to rebuilding Syria. The whole country has been reduced to rubble.

French historian Annie Sartre-Fauriat is an expert on Syrian antiquities. For over forty years, she has conducted research on Palmyra and written several books on the significance of its ancient monuments. Sartre-Fauriat is one of a group of experts charged with looking after Syria′s World Heritage monuments by UNESCO

The disappearance of Razan Zeitouneh and her colleagues has been one of the greatest mysteries of the Syrian war – until today. DW's investigative unit hunted clues across six ... END_OF_DOCUMENT_TOKEN_TO_BE_REPLACED

How can the various realities of Kurdish life, shaped by depression, resistance and war, be depicted in art? This is the question addressed by the “bê welat – the unexpected ... END_OF_DOCUMENT_TOKEN_TO_BE_REPLACED

Millions of people in Syria's Idlib region depend on foreign aid that passes through only one border crossing. The UN mandate regulating passage through it will expire on 10 July ... END_OF_DOCUMENT_TOKEN_TO_BE_REPLACED

They’ve already got the Louvre; they’ll soon have a Guggenheim Museum as well – and now the Emirates have added literature to their quest for cultural supremacy in the Arab world ... END_OF_DOCUMENT_TOKEN_TO_BE_REPLACED

By stage-managing his re-election in a poll widely dismissed as a farce, Syria's President Bashar al-Assad has killed two birds with one stone: he has forced his compatriots to ... END_OF_DOCUMENT_TOKEN_TO_BE_REPLACED

END_OF_DOCUMENT_TOKEN_TO_BE_REPLACED
Social media
and networks
Subscribe to our
newsletter