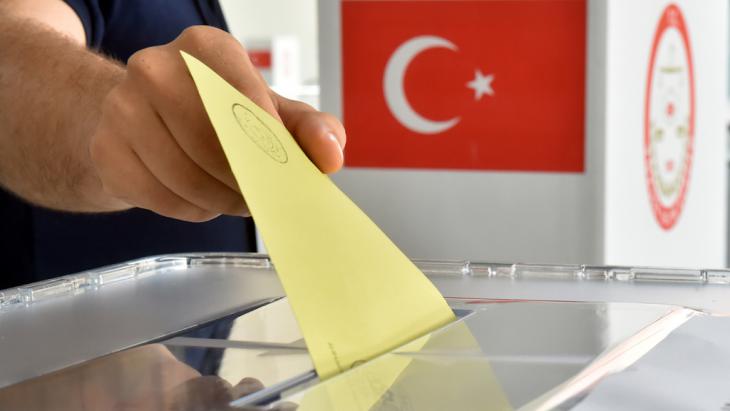 Parliamentary election in Turkey
An absolute majority hangs in the balance

Turkey goes to the polls on 7 June. Its ruling Justice and Development Party (AKP) is seeking an unprecedented fourth successive general election victory on a platform of wanting to turn Turkey into a presidential system. The AKP has an outstanding electoral track record, but with an ailing economy, without its charismatic leader and faced with a revamped opposition, could this be the end of its absolute majority? By Dorian Jones in Istanbul

A "New Turkey" is the ruling AKP's electoral slogan. Its central pledge is a new constitution that would turn the country from a parliamentary into a presidential system. The party has set itself the ambitious target of a two-thirds parliamentary majority, which would allow it to change the constitution.

Grandiose projects are on offer: "We have realised a development revolution throughout Turkey," proudly declares AKP MP Nesrin Ulema, "we will continue our work with new schemes aimed at people. We've taken steps towards two nuclear power stations and also towards one of the biggest airports in the world, the third airport for Istanbul."

The bedrock of the AKP's unprecedented 13 years of election success has been a booming economy that has seen GDP triple during its rule. But therein lies the problem: "The slowing of the economy has accelerated since the start of the year," warns chief economist Inan Demir of Istanbul-based Finansbank. "Consumer confidence is low; business confidence is also low. Since the beginning of the year, the Turkish lira has been one of the worst performing currencies. Inflation has been a big disappointment." With inflation being in part driven by a spike in food prices, Turkish newspapers have been filled with stories of record prices for staples like potatoes. 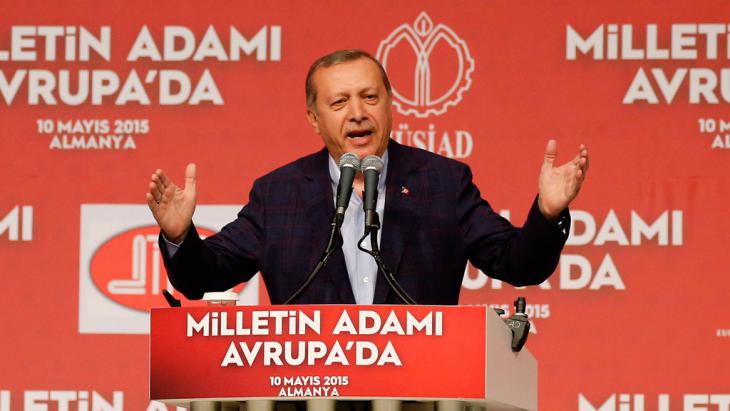 As president, Recep Tayyip Erdogan is supposed to be above party politics. However, he has launched a speaking tour of the country in the run-up to the election. Erdogan is undoubtedly still hugely popular with supporters of the AKP and has even taken his speaking tour as far afield as Germany and Belgium. He is pictured here addressing about 13,000 people in Karlsruhe on 10 May 2015 where he encouraged Turkish citizens in Germany to vote. About 2.8 million Turks living abroad are eligible to vote on 7 June

Smelling blood, the main opposition party, the staunchly pro-secular Republican People's Party (CHP) has ditched its strategy of attacking the AKP for its Islamist roots and instead has a laser beam focus on the economy. "We think that sending out the economic message and the promise and will for better public administration actually touches everybody's lives," declares deputy head of the CHP, Selin Sayek-Boke.

The CHP has also dumped its failed tactic of emphasising that it is the party of Mustafa Kemal Ataturk, the founder of the secular state. Whereas in the past, the name Ataturk was liberally used in every party speech, it is now seldom heard. The same is true of the word "laicism" (secularism). In previous elections, the ruling AKP ruthlessly portrayed the CHP as the party of the elite, of the past, and as anti-Muslim.

The CHP had vigorously opposed AKP reforms that ended restrictions on the wearing of religious headscarves in state buildings and universities. Now that opposition has been dropped. "We are committed to protecting those democratic religious reforms introduced and restoring those taken away," claims Sayek-Boke, highlighting the fact that Turkey has plummeted on nearly every international league table monitoring freedom of expression. The CHP also stole a march on its rival with a popularly acclaimed election ad campaign with catchy slogans, the brainchild of a top media name. One pro-AKP columnist claimed that the CHP is incapable of such inspiration and suggested that the hand of the CIA was evident in the campaign.

It is unclear whether the CHP can win over devout voters in particular. However, this election has largely been devoid of polarising debate between the secular and the devout. In previous elections, the AKP invariably benefited from such polarisation as it served to consolidate its base among devout voters. This time, devout Muslim voters may now feel that the gains they secured under the AKP are secure whoever is in power. 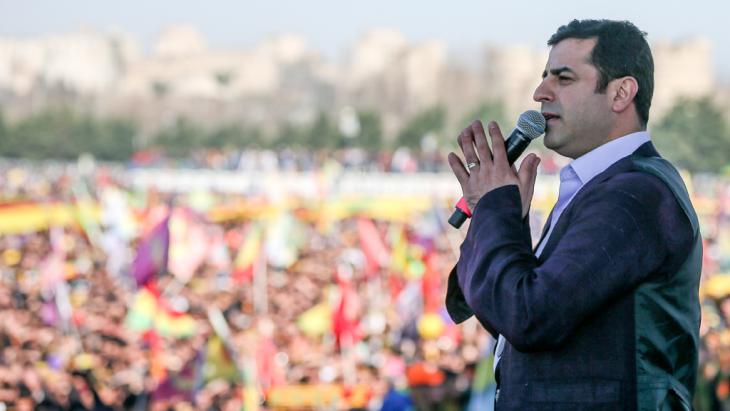 Selahattin Demirtas is leader of the pro-Kurdish Peoples' Democratic Party (HDP). His party has set its sights on breaking through Turkey's 10-per cent voting threshold to enter parliament. If it succeeds in doing so, it will have a considerable effect on the distribution of seats in parliament

The AKP also has to face the revamped CHP without its charismatic and talismanic leader Recep Tayyip Erdogan, who became president last year. In accordance with the constitution, he had to relinquish party allegiances. "Erdogan is a giant of politics, he was a very strong leader and right now we are seeing that Davutoglu is making lots of mistakes," observes Betul Durmaz of Gediz University. Ahmet Davutoglu took over the reigns of the AKP, and his campaign misfired from the start, with him reading the party's manifesto verbatim. Unfortunately, four of the most important pages were missing, namely those relating to the ongoing peace process with Kurdish rebels. That drew howls of ridicule from opponents. What is more, the bookish professor lacks the oratory skills of his predecessor.

In a move that is seen as a sign of impatience, Erdogan has launched a speaking tour of the country himself, in a thinly veiled campaign for the AKP. All the opposition parties have condemned the move as unconstitutional – a criticism that Erdogan has dismissed. But the tour could prove counterproductive. "This could add to voters' confusion over who is the leader of the AKP," claims sociologist Durmaz. The party's key electoral policy of a presidential system is also not a vote-grabber. Opinion polls indicate that a majority are against it and that there is even considerable opposition among AKP voters.

But the AKP does have a formidable advantage in the form of its powerful party organisation, which dwarfs that of its opponents, "With the force of our 9.5 million members, we are taking the mission of telling our party's policies and accomplishments street to street, house to house, village to village," explains AKP deputy Ulema. Half of these members are women who pioneered the targeting of female voters in Turkey with house visits.

All opinion polls still put the AKP firmly ahead of its rivals, albeit with a lower result than in previous elections. But there is a complicating factor that threatens to overturn all the AKP's electoral calculations, namely the decision of the pro-Kurdish party HDP to run as a parliamentary party. 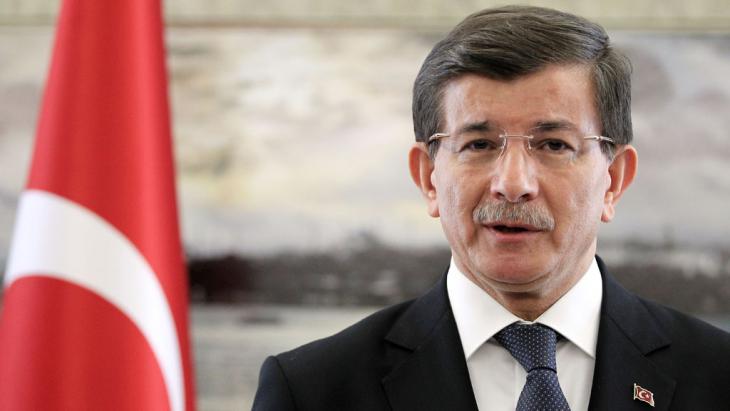 According to Dorian Jones, Prime Minister Ahmet Davutoglu's election campaign "misfired from the start". Davutoglu succeeded Erdogan as prime minister when the latter was elected president in 2014. However, he lacks the oratory skills and charisma of his predecessor. Moreover, his party's key electoral policy of introducing a presidential system is not a vote-grabber. "Opinion polls indicate that a majority are against it and that there is even considerable opposition among AKP voters," writes Jones

Until now, Turkey's 10-per cent voting threshold to enter parliament (the highest in the world) has successfully shut out any pro-Kurdish party, which nominally secure around 6 per cent of the votes. To circumvent the ban, the pro-Kurdish HDP (previously BDP) is fielding independent candidates. But under the HDP's charismatic young leader Selahattin Demirtas, standing on a platform of pluralism and democracy, the party threatens to break through the 10-per cent barrier, which would be tantamount to a political earthquake.

Like its predecessors, the HDP has in the past struggled to win votes from Turks, especially in western Turkish cities. Many were suspicious of its links with the Kurdish rebel group, the PKK, which has been fighting the Turkish state for minority rights since 1984. But for two years now, there has been a peace process and a ceasefire that has largely held. HDP's parliamentary deputy Kurkcu, who is running in the western city of Izmir, claims that there has been an important change in the political climate,

"In the past, our people and offices were subject to scores of attacks. But we cannot speak about a hate speech atmosphere anymore in Izmir. I do not know if it's stable or permanent but I know that today, the HDP is running on the same basis with all the other parties. This is incredible, like a miracle."

All opinion polls put the HDP hovering around 10 per cent, which is likely to make the AKP more than a little nervous because under the Turkish election system, the AKP would be the big loser if the HDP entered parliament. Some projections predict it could lose as many as 50 parliamentary seats. Coupled with a resurgent opposition, the prospect of the AKP losing its absolute majority has become a plausible scenario.

"The stakes are very high, that's why people do think the vote will be rigged," warns Kadri Gursel political columnist and expert on Kurdish affairs for Turkey's mainstream "Milliyet" newspaper, "If, for example, the HDP fails to pass the 10-per cent election threshold with a very narrow margin, there will be enough suspicion and enough frustration to destabilise the country to some extent."

If the HDP does not enter parliament, most of its votes would be transferred to the AKP, its main rival. That could ultimately ensure it a comfortable majority, bringing it within touching distance of a constitution-changing majority.

Last year's local elections were marred in controversy amid allegations of vote rigging, with mysterious power cuts just when the votes were being counted. The government blamed the cuts on cats entering power stations. All of Turkey's diverse and divided opposition have found common cause in ensuring that the poll is monitored. This election is widely predicted to be not only the most closely fought in more than a decade but also the most closely monitored.

Relations between Turkey and Russia are ambivalent. Moscow is nonetheless trying to prop up the leadership in Ankara. Elections are to be held in Turkey in June – and the last ... END_OF_DOCUMENT_TOKEN_TO_BE_REPLACED

All eyes in Turkey are on a court hearing scheduled for January 30 into a child abuse case that allegedly occurred with the knowledge of one of Istanbul's most powerful Islamic ... END_OF_DOCUMENT_TOKEN_TO_BE_REPLACED

Any reconciliation between Turkey and Syria’s Assad regime would have disastrous consequences for many Syrians, explains Syria expert Kristin Helberg END_OF_DOCUMENT_TOKEN_TO_BE_REPLACED

The poetry of Pir Sultan once prompted uprisings in the Ottoman Empire. To this day, Alevis identify with him. Rainer Hermann visited Mehmet Celebi, a direct descendant of the ... END_OF_DOCUMENT_TOKEN_TO_BE_REPLACED

There are signs of an imminent normalisation of relations between Turkey and Syria. This would allow Erdogan to score political points domestically before the upcoming elections ... END_OF_DOCUMENT_TOKEN_TO_BE_REPLACED

Turkey will mark the centenary of the proclamation of the Turkish republic in October. But 2023 will be an important year in another respect too: Turks will go to the polls in ... END_OF_DOCUMENT_TOKEN_TO_BE_REPLACED
Author:
Dorian Jones
Date:
Mail:
Send via mail

END_OF_DOCUMENT_TOKEN_TO_BE_REPLACED
Social media
and networks
Subscribe to our
newsletter