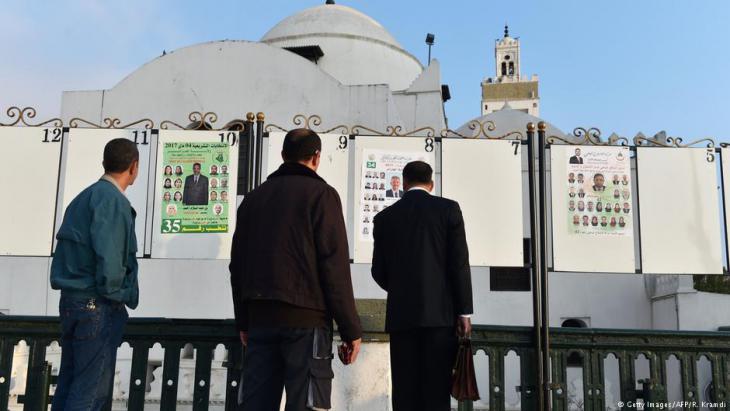 The parliamentary elections in Algeria on 4 May 2017 mark a political watershed. Even though the outcome of the elections is not expected to hold any big surprises, this time the regime’s credibility really is on the line. By Isabel Schafer

The constitutional reform of 2016 – President Bouteflika’s delayed response to the "Arab Spring" – promised more transparency, democracy and political participation. It seems certain that the traditional parties of government, the "Front de liberation nationale" (FLN) and the "Rassemblement national democratique" (RND) will win a majority once again, even if it is a slimmer majority than in the 2012 elections. The real question is to what extent the election process will actually prove more transparent, fair and free.

Another crucial question is whether the numerous non-voters can be mobilised. Frustration with politics and political parties is widespread, not only among young people, but also increasingly in the middle classes – confronted with the country's economic problems, they no longer buy into political promises.

Voter turn-out in the 2012 parliamentary elections was just 43.9 percent according to official figures. In an attempt to motivate more voters, many parties have now launched their campaigns from the provinces and placed the slogan "Go and vote!" on their banners. But public interest remains muted. This is due in part to the less than convincing party manifestos, but also to the poor reputations of parliamentary representatives.

A lack of transparency?

A total of 12,591 candidates on 1088 lists are standing for election, among them 797 lists from the 63 parties, 163 independent lists and 128 alliance lists. One of things causing a stir is the absence of some candidates’ photos from election posters: they don’t want their image to be used for traditional religious reasons. The HIISE decided that this decision was up to the parties, while many media outlets and citizens have criticised it as a lack of transparency. 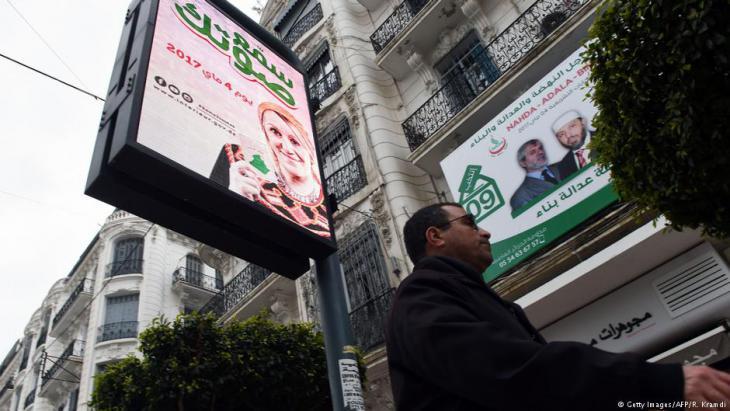 Struggling against apathy and political abstinence: in an attempt to motivate more voters, many parties have now launched their campaigns from the provinces and placed the slogan "Go and vote!" on their banners. But public interest remains muted

Election promises include combatting the informal economy, reorganisation of the national budget, investment programmes for Algerian firms, administrative reform of the regions and social aid money to combat the negative effects of falling oil prices. Yet specific reform proposals, focussing on how these aims are to be realised, rarely figure.

Even before the election campaign, the media was forbidden from reporting on parties who were calling for a boycott of the elections, like the small parties "Talaie El Houriat" and "Jil Jadid". Their complaint: the election process is influenced by industry lobbying and media control and is not fair.

The opposition platform "Coordination nationale pour les libertes democratiques et la transition" (CNLTD) is, however, divided and weakened. It demanded early elections and an independent election authority in 2014. This has now been set up, though its 400 members were appointed by the president without consulting Algerian civil society. Independent election observers have faced difficulties for years.

"Green Alliance" on the ascendant

The Islamist parties have formed two larger alliances for the 2017 elections: one is the Muslim Brotherhood’s "Mouvement de la societe pour la paix" (MSP) (currently on 49 seats) under Abderrazak Makri, who have formed an alliance with the "Front du changement" (FC) (5 seats). The other is the "Front pour la justice et le developpement" (FJD) (8 seats) under Abdallah Djaballah, together with "Ennahda" and "El Bina". The other, smaller Islamist parties "El Islah" and "El Bayan" are working individually.

They came together before, in 2012, in an "Allianz verte" to win more influence in parliament. Although voters’ mistrust of political Islam has been high since the civil war (1991 to 2002), religious feeling has still grown among the population, and even salafist ideology has its followers. 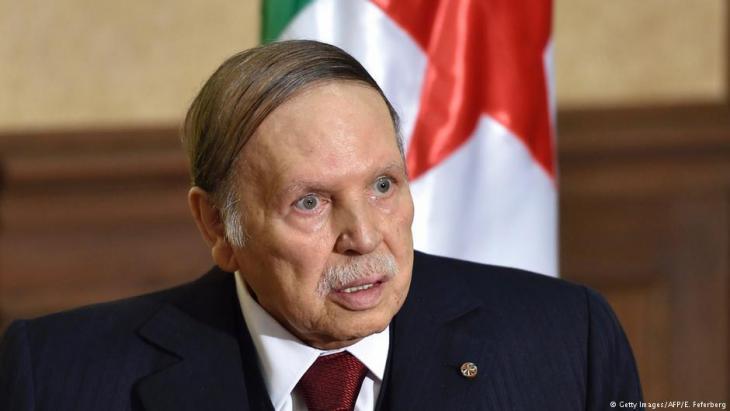 Algeria′s long-term dictator: President Abdelaziz Bouteflika, who turned 80 on 2 March, has been in power since 1999. Despite his ailing health, he was re-elected in 2014. He hasn′t appeared in public for years. Human rights organisations complain of repression; the rights to freedom of speech and freedom of association are consistently being violated. Independent unions, journalists and activists are also targeted. It remains unclear whether Bouteflika will be able to complete his term of office which concludes in 2019

The MSP alliance is banking on at least 40 percent of the vote. The many independent candidates – and candidates from the national/democratic parties whose political leanings are close to those of the Islamists – can also contribute to this. The Algerian newspaper "El Watan" speaks of an "Islamisation of the political class". Across the country, Islamist parties are managing to mobilise voters, particularly through the mosques. Islamist circles claim that in past elections, forged ballot papers have been the major reason they have not increased their representation in parliament.

The parliamentary elections are taking place at a time of great economic and social tension. The Algerian economy has been particularly hard hit by the fall in oil prices since 2014, since dependency on income from oil and gas continues to be extremely high (97 percent of foreign exchange revenue). Economic, financial and social crises are deepening.

The state lacks important funds and its financial reserves are shrinking. Economic growth is declining (by around 3 percent in 2017), inflation is on the rise (around 3.5 percent) and prices are rising, too (for food, rent and electricity among other things), which is making people's day-to-day lives even more difficult. A further growth in unemployment is predicted for 2018, to 13.2 percent (against 11.7 percent in 2017 and 10.5 percent in 2016). Young people are worst affected, with around 30 percent youth unemployment.

Despite the wealth of resources, social inequality is rising; this has led to increasing dissatisfaction among the people of Algeria. In a population of roughly 40 million, around 25 percent live below the poverty line. At the same time, painful cuts are being made to the national budget (reduced in 2017 from 110 billion to 63 billion), and taxes and fees have been raised. 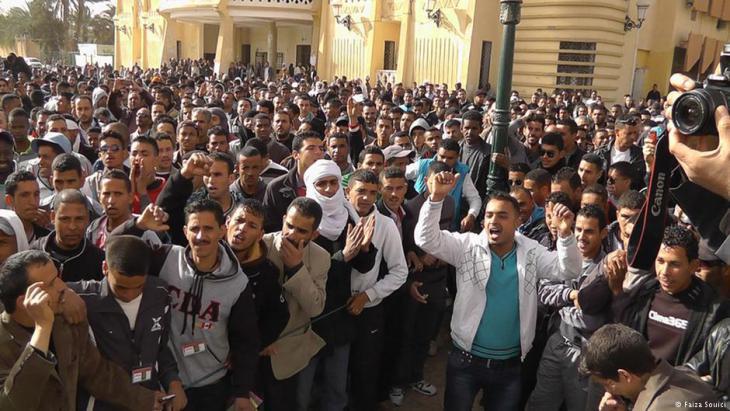 No sympathy for Algeria′s rebellious youth: many young people face unemployment and no prospects for a better future. Nevertheless, the Algerian authorities are renowned for clamping down hard on the slightest protest. The regime regards the "Arab Spring" as something invented by the West – anyone harbouring similar ideas is supposedly being manipulated by foreigners or is "spying for the West"

As a result, there have been an increasing number of protests against price rises, but also against the lack of employment prospects and authoritarian despotism. Various parts of the country have seen repeated protests and violent clashes with the police. However, these are mostly restricted to local areas and no country-wide protest movement or national strike has so far taken place.

The government under Prime Minister Abdelmalek Sellal meanwhile shows no understanding for the young protesters. They say the "Arab Spring" was something invented by the West – anyone who harbours similar ideas is supposedly being manipulated by foreigners or is "spying for the West."

The imams of the country’s 30,000 or so mosques have been urged by the prime minister to preach that "security and stability" are the fundamental principles of Sharia, with the aim of suppressing potential protests, in particular by young people. But if the socio-economic crisis continues, discontent among the population is bound to rise.

Dr. Isabel Schafer is an independent political science scholar and lecturer at the Humboldt University in Berlin. Her areas of specialism include the political, economic and social transformation of North Africa.

Coronavirus continues unabated. Iran remains a hub of infection, war-torn Syria has recorded its first case and Yemen is bracing itself for the worst. Here’s the latest from ... END_OF_DOCUMENT_TOKEN_TO_BE_REPLACED

With borders closing and the opportunities for international travel shrinking by the hour, we take a look at coronavirus developments across the Middle East and the wider Muslim ... END_OF_DOCUMENT_TOKEN_TO_BE_REPLACED

As the global economy reels and everyday life grinds to a standstill, we take a look at the spread of coronavirus across the Middle East and the wider Muslim world – and the ... END_OF_DOCUMENT_TOKEN_TO_BE_REPLACED

Focussing on the Algerian protest movement, "Nardjes A." by Karim Ainouz, is about the universal power of hope to change the social and political status quo in the Maghreb country ... END_OF_DOCUMENT_TOKEN_TO_BE_REPLACED

Decades after the first French nuclear test in Algeria, thousands of victims are still waiting for compensation. To date only 51 claims have been filed under French legislation ... END_OF_DOCUMENT_TOKEN_TO_BE_REPLACED

Few would have thought that Algeria's Hirak protest movement would still be mobilising the masses 12 months on from its first peaceful demonstration. According to Isabelle ... END_OF_DOCUMENT_TOKEN_TO_BE_REPLACED
Author:
Isabel Schäfer
Date:
Mail:
Send via mail

END_OF_DOCUMENT_TOKEN_TO_BE_REPLACED
Social media
and networks
Subscribe to our
newsletter