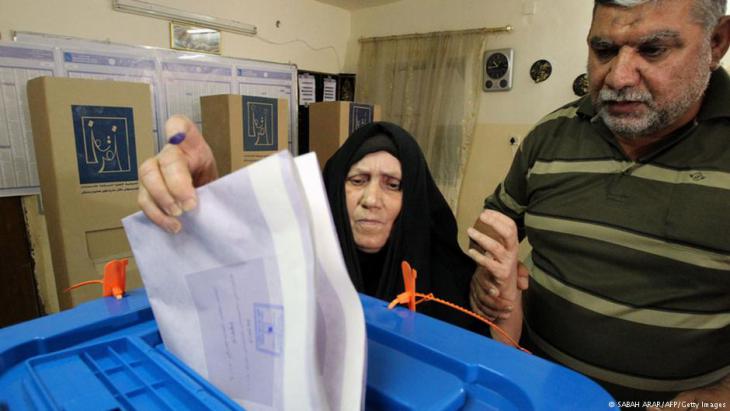 At the forthcoming parliamentary poll in Iraq, the question is who will gain the upper hand – pro-Iranian Shias or pro-western forces? A pre-election analysis by Arnold Hottinger

The Iraqi parliament has decided that parliamentary and local authority elections will take place this year on 12 May. This despite protests from Iraqi Sunnis, who believed the poll should be postponed until the huge numbers of Sunnis currently living in camps were able to return to their home towns.

The vast majority of those displaced are Sunnis. They were forced to flee by the war against "Islamic State" (IS). The refugees include former residents of Mosul, once the second-largest city in Iraq.

A further Sunni demand was that – apart from members of the official security forces, army and police – armed individuals should not be present at polling stations. With this, Sunnis are drawing attention to the fact that especially in places recaptured from IS, armed members of the "Popular Mobilisation Forces" (PMF) are also present alongside "regular" forces.

Members of the PMF, most of them Shia Muslims, have been "officially sanctioned" in so far as they have been integrated into the army. They are paid by the government and are officially under the command of the prime minister. But as individual entities, they have their own commander and their own structures. This means that in practice, they are able to act independently and on their own initiative.

Many Sunnis are afraid of them. During the battles against IS, the Shia PMF tortured detainees and civilians. The Shias accused many Sunnis of belonging to IS and co-operating with the movement. Torture was used to extract such confessions. 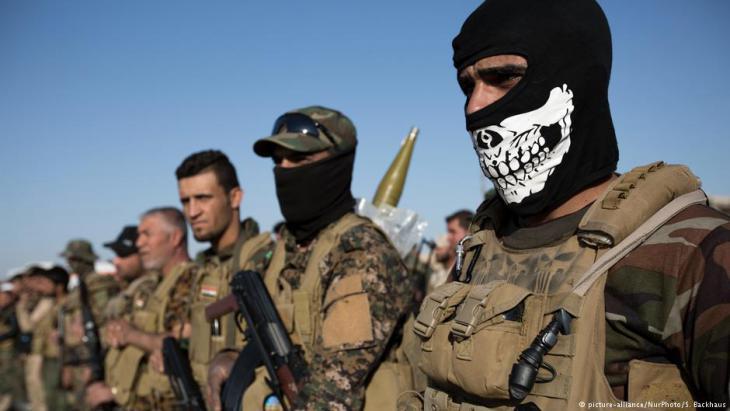 Spearheaded the fight against IS: Members of the PMF, most of them Shia Muslims, have been "officially sanctioned" in so far as they have been integrated into the army. They are paid by the government and are officially under the command of the prime minister. But as individual entities, they have their own commander and their own structures. This means that in practice, they are able to act independently and on their own initiative

Summary executions also took place. The government in Baghdad tried to prevent such incidents. But there were so many cases, the Sunnis' fear of the PMF grew. Some Sunni parties declared that if elections were conducted in their regions under current conditions, this would amount to a "coup". By this, they meant a coup by armed Shias against defenceless Sunnis trapped in camps.

It is indeed the case that PMF militias are the most significant new factor in the approaching elections. To be sure, bearers of arms in Iraq are not allowed to vote or stand for election and PMF militias fall into this category. But among their commanders, those with political ambitions are sidestepping this rule by officially resigning from the militias they lead and forming their own "parties".

These leaders enjoy huge popularity in their home regions. For many of those who live there, they are heroes who courageously rose up in the summer of 2014 and defended Baghdad as well as southern areas of the country. At the time, the Iraqi army had collapsed and IS advanced on the capital from Mosul.

The clashes in Baghdad between supporters of Muqtada al-Sadr and pro-Iranian militias show that an intra-Shia power struggle is in full swing. An analysis from Cairo by Karim El- ... END_OF_DOCUMENT_TOKEN_TO_BE_REPLACED

Bachtyar Ali sends the hero of his latest novel – "Mein Onkel den der Wind mitnahm" – literally flying. Jamshid is so thin after his years as a political prisoner that a gust of ... END_OF_DOCUMENT_TOKEN_TO_BE_REPLACED

In this essay, renowned Lebanese journalist and writer Hazem Saghieh asks whether the Arab Levant, which stretches from Iraq in the east to Egypt in the west, will remain an ... END_OF_DOCUMENT_TOKEN_TO_BE_REPLACED

Climate change is taking its toll on communities in Iraq. Younes Ajil turns on the tap in his home but nothing comes out. Villages in the south of the drought-hit country are ... END_OF_DOCUMENT_TOKEN_TO_BE_REPLACED

END_OF_DOCUMENT_TOKEN_TO_BE_REPLACED
Social media
and networks
Subscribe to our
newsletter