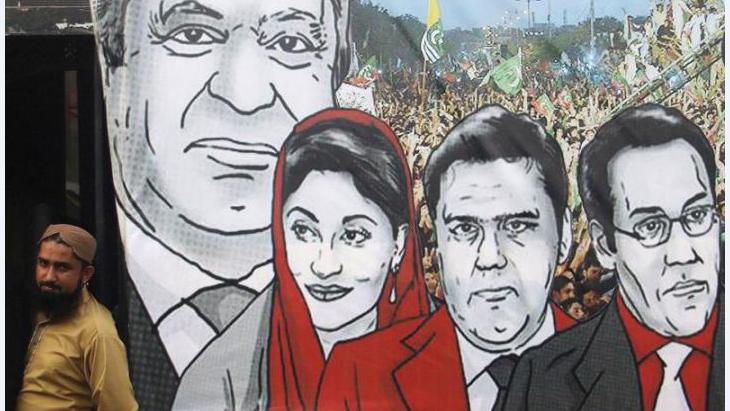 Parliamentary elections in Pakistan
Who will prevail?

What's at stake in Pakistan's upcoming parliamentary elections? Should the West be concerned about a possible military-backed government and its impact on Afghanistan's security and South Asia's geopolitics? An analysis by Shamil Shams

For years, political stability in nuclear-armed Pakistan has been a major concern for the international community, particularly for the West. Terrorist attacks perpetrated by home-grown Islamists have wreaked havoc in the South Asian country that borders Iran, Afghanistan, China and India. A surge in extremist tendencies and a rise of anti-West Islamist parties in Pakistan is definitely not a pleasant situation for the United States and its NATO allies, whose forces have been battling the Taliban and so-called "Islamic State" (IS) in Afghanistan for many years.

Although Washington has never been shy of criticising the Pakistani military establishment for "backing" its "jihadist proxy groups" in war-torn Afghanistan, the US so far has not been able to confront the army generals openly and directly.

The Pakistani military thus remains the most powerful player in the country's politics and calls most of the shots. Pakistan's security is directly linked to its army's policies and actions. Although the generals are seen as backing some extremists groups – an allegation they deny – a weakened Pakistani army could also trigger uncontrollable chaos in the Islamic country as "non-state actors" could gain control of the administration.

Of course, a mature civilian political set-up can thwart such dangers, but democracy has failed to deliver much to the masses. Also, the generals have ruled the country either directly or from behind the scenes, hence not allowing democracy to flourish.

The general elections in the country on 25 July are being contested against the backdrop of who should have supremacy in state affairs. Civilian leaders, the military or the military-backed politicians? 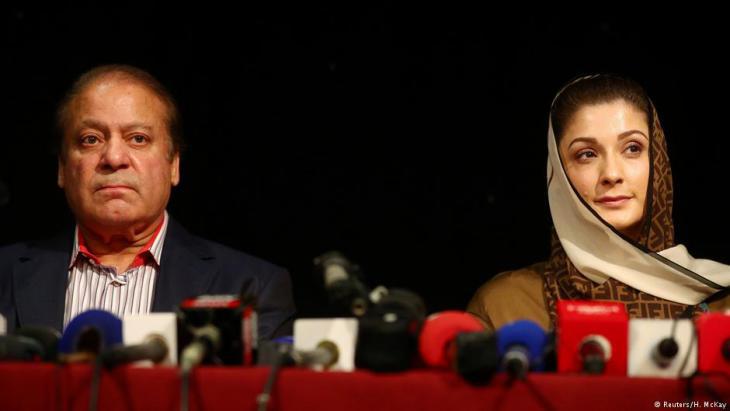 Political spectacle and PR coup in one: on 13 July, Nawaz Sharif and his daughter daughter Maryam Nawaz (pictured here at a PML-N event in London two days previously) flew to Lahore, to face arrest on corruption charges. According to Shamil Schams, instead of ending Sharif's political career, the decision to return to Pakistan from the UK has actually increased his party's chances of returning to power after the vote on 25 July

A military protégé in the 1980s and the early 1990s, three-time premier Nawaz Sharif turned against his army backers in 1999 when his majority government was overthrown by General Pervez Musharraf in a bloodless coup. Sharif was sent into exile in Saudi Arabia after giving a guarantee that he would not return for the following ten years.

But Sharif came back to Pakistan after eight years to play an active role in politics. He had already joined hands with another former PM, Benazir Bhutto, who was later assassinated in an election rally in December 2007. Sharif had also signed a "charter of democracy" with Bhutto to minimise the role of the military in state affairs.

But it was after he became prime minister in 2013 that Sharif adopted an explicit anti-military posture. He attempted to seek friendly ties with India and its prime minister, Narendra Modi, and tried to take foreign policy matters into his control. Sharif's moves irked the army, which analysts say tried to cut him down to size.

Last year, Pakistan's Supreme Court disqualified Sharif from the post of prime minister on Panama Papers-linked corruption charges. Earlier in July, an accountability court sentenced him to 10 years in prison and his daughter Maryam Nawaz to seven years behind bars. Both were in the UK when the court delivered its verdict.

This could have been the end of Sharif's political career, but he decided to return to Pakistan from the UK to face jail. As the father-daughter duo are now incarcerated in a Rawalpindi jail, his Pakistan Muslim League (Nawaz Group, PML-N) party's chances of coming back to power after the vote on 25 July have increased. But political observers say the military is trying to make sure that Sharif's resurgence doesn't take place and is using the judiciary to keep him out of politics. The military's public relations department has refuted these claims many times.

Another Pakistan analyst Abdullah Dayo says: "Sharif is likely to get 'sympathy votes'. He has been successful in promoting his narrative about civilian supremacy."

Imran Khan was Pakistan's most popular cricketer in the 1970s and the 1980s. Under his captaincy, the country won its first one-day format cricket World Cup. In the 1990s, Khan started charity work and opened a much-needed cancer hospital in the country. He received donations from all around the country. 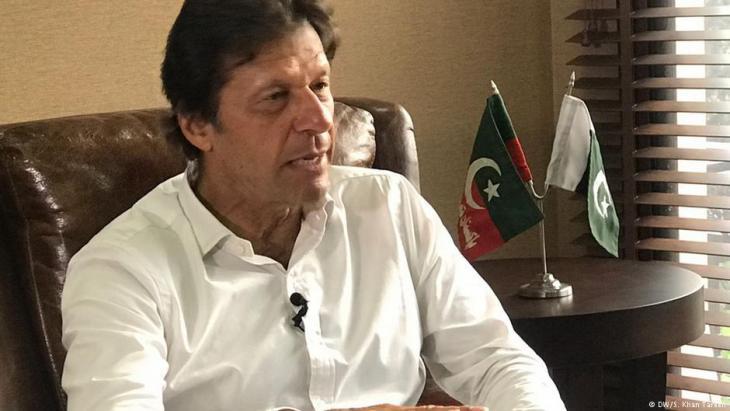 On the cusp of power? In the 2013 election, Khan's Tehreek-e-Insaf (PTI, Movement for Justice) party formed a government in the north-western Khyber Pakhtunkhwa province, which borders Afghanistan. Despite this success, he has not so far been able to turn provincial success into national power. With Sharif now behind bars and the rumoured support of the military, could this finally be Imran Khan's moment?

Khan's PTI initially didn't gain much traction. During the early 2000s, Pakistan's main focus was on the US-led war on terror in Afghanistan. But after the end of Musharraf's eight-year rule in 2007 and the return of democracy, the PTI slowly made its way into Pakistani politics. In the 2013 election, Khan's party came second and formed a government in the restive north-western Khyber Pakhtunkhwa province, which borders Afghanistan.

"Khan's stance on corruption, terrorism and nepotism in Pakistani politics has struck a chord with the masses, which are fed up with the traditional ruling elite. He has no corruption charges on him, no foreign assets," claims a PTI activist in Islamabad, Khawar Sohail.

It was Khan's party who filed corruption cases against Sharif. His relentless effort to see Sharif out of power has borne fruit. Now he is dubbed "the next PM" of Pakistan. It is unclear, however, whether he can defeat Sharif's party in Punjab, Pakistan's most populous and electorally most significant province. Punjab is still Sharif's political stronghold and poll-rigging in Khan's favour could trigger massive protests in the province. But it is clear that whoever wins in this province will form the next government in Islamabad.

"With alleged election-rigging in favour of the PTI, it is likely that Khan's party will get more seats in parliament. The PML-N will also face a tough challenge in Punjab," analyst Dayo said.

But Xari Jalil, a Lahore-based journalist, thinks it will be a "hung parliament" with no party gaining a majority.

"In 2013, Sharif's PML-N won Punjab easily. This time we see a tough competition from the PTI. At the same time, the PTI won't be able to win as many seats in the province as it is expecting. After all, the PML-N still has support in Punjab," said Jalil.

Some analysts are of the view that a parliament with no clear majority for any party also suits the military establishment, as it will be easier for the generals to deal with a "weak premier".

The Pakistani army denies it favours any party and says it has no role in the election beyond its constitutional limits. 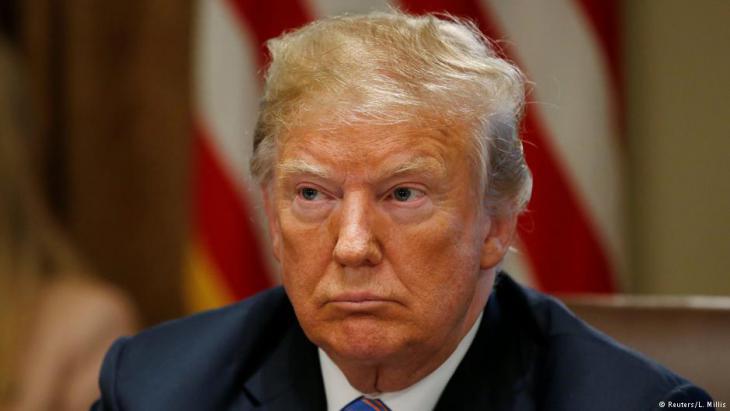 "US President Donald Trump's administration demands more co-operation from Islamabad to bring peace to Afghanistan. So far, Islamabad and Washington have been at loggerheads over the issue. The US now reportedly seeks direct talks with the Taliban, something that would not go down well with Pakistani authorities, who want to secure their leverage on Afghanistan–Pakistan geopolitics," writes Shamil Shams

Amid this Sharif–Khan tug-of-war, it is Bilawal Bhutto Zardari, son of Benazir Bhutto, who has impressed the liberal sections most. Bilawal, who became chairman of the PPP at an early age after his mother's assassination in 2007, faces a Herculean task to revive the PPP, which was once Pakistan's most potent political force. Although the PPP's chances of winning tomorrow's vote are slim, Bilawal's political campaign has focused on dealing with issues and ideas rather than personalities.

But analysts also say that he needs to distance himself from his father, former President Asif Ali Zardari, if he wants to have a long political career. Zardari's reputation as a "king-maker" in Pakistani politics comes with massive corruption accusations against him. Zardari also lacks Benazir Bhutto's charisma, which was a reason for her immense popularity in Pakistan.

"Bilawal is intelligent but his political career has been scripted by his father and members of his team. He could revive his mother's party if he breaks free from his father's influence and takes charge of the PPP," said Hasan Mujtaba, a New York-based Pakistani journalist.

The polls on 25 July are not just crucial for Pakistan; they are important for the security situation in Afghanistan and South Asian geopolitics.

Apart from fixing the country's economic woes, the next government will have to deal with a number of complex regional issues. An international terror watchdog placed Pakistan on its "grey list" in June for sponsoring militant groups. The Financial Action Task Force (FATF) could put the country on its "blacklist" in September. The consequences of such a move on Pakistan would be disastrous as it would cripple its economy.

The next government will have to allay the international community's concerns about terror-financing and Islamist support. But some banned Islamist groups have already been given a free hand to contest the elections and hold rallies. Mainstream political parties are also getting into local alliances with these groups to win the vote.

US President Donald Trump's administration demands more co-operation from Islamabad to bring peace to Afghanistan. So far, Islamabad and Washington have been at loggerheads over the issue. The US now reportedly seeks direct talks with the Taliban, something that would not go down well with Pakistani authorities, who want to secure their leverage on Afghanistan–Pakistan geopolitics.

The next government will either take a more confrontational course toward the US or will co-operate, and it depends on who forms the next government. Khan, a possible PM, has been very critical of US policies in Afghanistan and will likely take an aggressive stance.

China's multibillion-dollar initiative, the China–Pakistan Economic Corridor (CPEC), also needs a fresh start. There hasn't been much progress on the Beijing-funded project. There is resistance to the CPEC from local groups in Pakistan that see it as China's design to exploit their resources. The West also has concerns about the CPEC.

While Khan is likely to take a more conservative approach toward geopolitical issues, Sharif is expected to deal with them from a business-oriented perspective. Pakistan is at a crossroads, and the vote on 25 July will determine which path the country will take.

Very different Western reactions to the suffering in Ukraine and the Arab world show that there is a profound rift among cultures. Essay by Michael Young END_OF_DOCUMENT_TOKEN_TO_BE_REPLACED

The documentary "Nadia" tells the incredible story of Nadia Nadim, who was forced to flee from the Taliban as a child and became a football star. By Annabelle Steffes-Halmer END_OF_DOCUMENT_TOKEN_TO_BE_REPLACED

Three award-winning female directors appeal to the international film industry to save Afghan cinema. Supporting women filmmakers is more important than ever. By Christine Lehnen END_OF_DOCUMENT_TOKEN_TO_BE_REPLACED

Russia's ranking on the World Press Freedom Index has fallen again over the Kremlin's wartime censorship of the Ukraine conflict. From Myanmar to Mexico, journalists continue to ... END_OF_DOCUMENT_TOKEN_TO_BE_REPLACED

Ideally, those Europeans currently welcoming Ukrainian refugees would show the same sympathy to Syrians, Afghans and others fleeing war beyond the continent. But, argues Ian ... END_OF_DOCUMENT_TOKEN_TO_BE_REPLACED

END_OF_DOCUMENT_TOKEN_TO_BE_REPLACED
Social media
and networks
Subscribe to our
newsletter