In 1914, Paul Klee undertook a two-week study trip to Tunisia, which would leave an indelible mark on his work. In his essay-like documentary, Bruno Moll takes an unusual approach in retracing the itinerary of Klee's Tunisian awakening. By Alexandra Stäheli 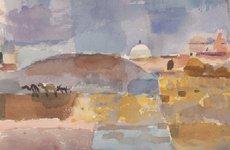 When Paul Klee visited Tunisia, he was impressed by the quality of the light there

​​In April 1914, Paul Klee, together with his friends August Macke and Louis Moilliet, undertook a two-week study trip to Tunisia, which would leave an indelible mark on his work.

The stay in North Africa, later recorded in art history as "the trip to Tunis," led Klee, as he commented in his contemplative and enthusiastic diary entries, quite literally to an illumination – to a new encounter with light and color.

This, he stated a few years later, formed the "foundation for a new color palette." Klee describes as a revelation the – for him – previously unknown spectacle offered by the Arabic landscape and architecture.

The constantly changing illumination and the symphony of color, form, and rhythm had the effect of pushing the artist's work further towards abstraction. After the trip, Klee's watercolors and drawings are even further removed from any representationalism, whereby the composition of individual elements on paper now seem to follow an even stronger cosmic logic.

At the same time, the deeply experienced impressions in Tunisia confirmed his sense of vocation. On the date of April 16, Klee confided to his travel diary the account of his inner experience, which would later become the most quoted observation in scholarship on the artist: 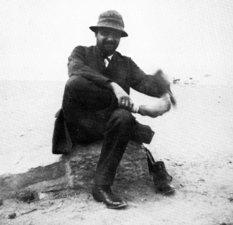 Paul Klee (1879–1940) was a Swiss painter of German nationality. He was influenced by many different art styles in his work, including expressionism, cubism, and surrealism

​​"I feel my work and it gives me confidence in myself without effort. Color possesses me. I don't have to pursue it. It will possess me always, I know it. That is the meaning of this happy hour: color and I are one. I am a painter."

In his essay-like documentary film "Paul Klee – The Journey to Tunis," the Swiss film maker Bruno Moll takes an unusual experimental approach in once again retracing the itinerary of Klee's Tunisian awakening of almost one hundred years ago.

Moll's film isn't simply a head-on encounter of the documentary trail provided by the artist's diary entries and images of modern-day Tunisia. Rather, in a clever change of perspective, he conveys to the viewer the locations Klee visited from the point of view of the host country.

The Tunisian film maker and story teller Nacer Khemir, known in Europe through films such as "Le collier perdu de la colombe" and "Bab' Aziz," accompanies us as our philosophical travel guide to Tunis, Kairouan, and Hammamet with his commentaries on Arabic architecture and art.

​​Khemir's narrations provide a gentle counterpoint to the exoticism and projections of the Orient experienced by the three artists to a profound degree, and not least of all in the red-light district of Tunis. At the same time, during the course of this film journey, the narrations constantly throw light on the remarkable parallels between Western and Eastern imagery, between Klee's quest for the original formula of creation and Khemir's poetic cosmology.

When Khemir considers emptiness in Arabic art as an expression of humility, it seems like the reverberating color-saturated echo of Klee's view that abstraction is a bow to the absolute.

And when the Sufi influenced film maker explains that the strict symmetry of Arabic architecture refers to the mirror relationship between this world and the hereafter, between the original and the copy, we immediately see the link to Klee's theosophically-leaning mysticism, which claimed the task of making the unseen glow in the visible world.

These spiritual – and cheerfully cerebral – connections between North and South provide some of the best moments in Moll's film. Yet, in a film where the topic of color plays such a crucial role, the flights of fancy break down now and again, especially during the technically deficient pale and dimly-colored sequences from Khemir's films.

Or when the narrator Khemir, who makes the claim that at the age of twelve he was possessed by the decision to become an artist during a Klee exhibition, occasionally mouths platitudes while expounding his wide-ranging thoughts.

Nonetheless, by slowly unfolding the melodic coexistence of contrasts, this simply produced documentary film offers an inspired glimpse into visual passion and leaves us wanting to discover more.

The Reception of the Other
Western Painters of the Orient, Orientalists in the East
In two books that cast light on the history of the reception of the Orient and the Occident, the New Yorker Kristian Davies looks at images, while the Egyptian Muhammad Immara studies texts. Wolfgang G. Schwanitz reports

Hans Werner Geerdts
A Rare Symbiosis
The German painter and writer Hans Werner Geerdts has been living in the Moroccan city of Marrakesh for more than sixty years. His art has made its presence felt throughout the country. Christoph Leisten presents this portrait of the artist on the occasion of his eightieth birthday

Bert Flint – A Dutchman in Marrakech
Preserving North Africa's Cultural Heritage
The life work of a Dutch researcher and collector has led to the creation of an institute dedicated to the cultural heritage of Morocco, the Sahara and adjacent regions. By Beat Stauffer

END_OF_DOCUMENT_TOKEN_TO_BE_REPLACED
Social media
and networks
Subscribe to our
newsletter