Peace in sight for Nagorno-Karabakh?

Azerbaijan and Armenia have been at war again over the Nagorno-Karabakh region in the South Caucasus for over a month. Three ceasefires have failed. The conflict is taking its toll on civilians. Julia Hahn reports 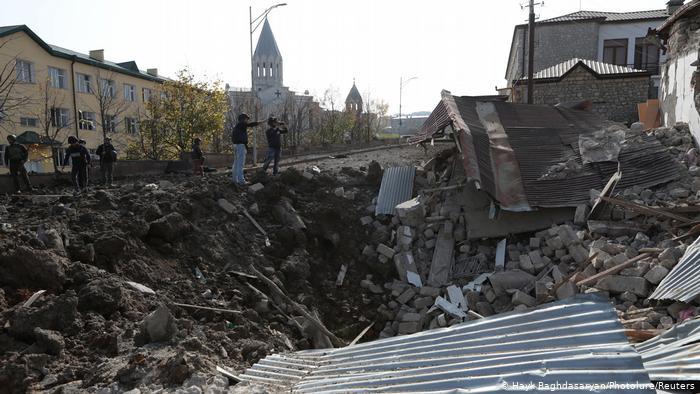 Residential area reduced to rubble: the governments of Armenia and Azerbaijan accuse each other of deliberately bombing civilian targets. For example, part of the city of Shusha in Nagorno-Karabakh's famous 19th-century cathedral was destroyed in early October. According to authorities in the Nagorno-Karabakh region, Azerbaijani troops are just a few kilometres from the strategically important city 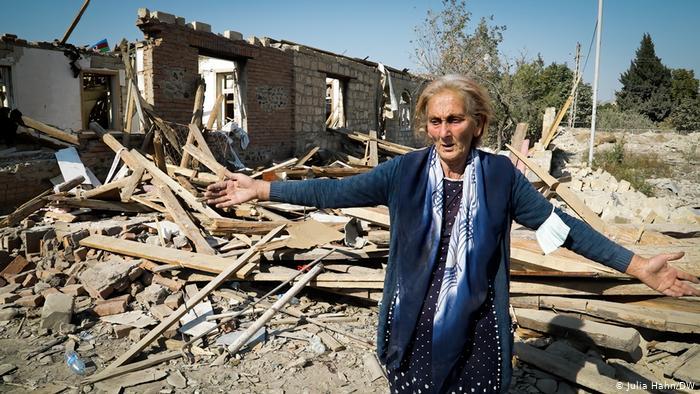 Destroyed livelihood: Ragiba Guliyeva stands in the ruins of her house in Ganja, Azerbaijan's second largest city, which was hit in a rocket attack. "I was in the kitchen when beams and stones rained on me all of a sudden," she said. "I screamed as loudly as I could." Ganja is dozens of kilometres from the front. The government of Azerbaijan blames Armenian troops for the attack 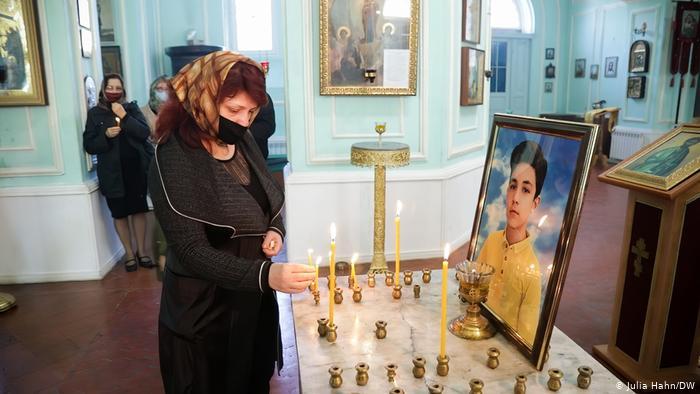 Mourning the children: several people were killed in the attack on Ganja, according to Azerbaijani authorities.Guliyeva's 13-year-old grandson, Artur, was one of the victims. At a church service, teachers and classmates paid their respects. According to official figures, at least 130 civilians were killed on both sides 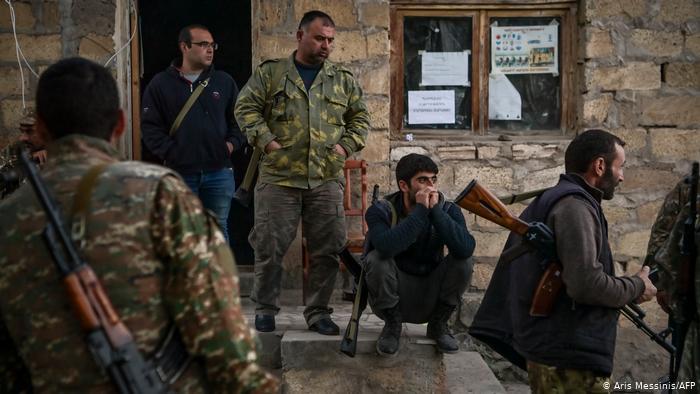 Volunteering for the front: authorities in Nagorno-Karabakh say 1,200 soldiers have died since fighting started in September. Azerbaijan's government has not reported the extent of its military losses. Russian President Vladimir Putin recently mentioned a total of 5,000 people dead on both sides. Young men keep on volunteering for service at the front, such as these fighters in the Nagorno-Karabakh capital, Stepanakert 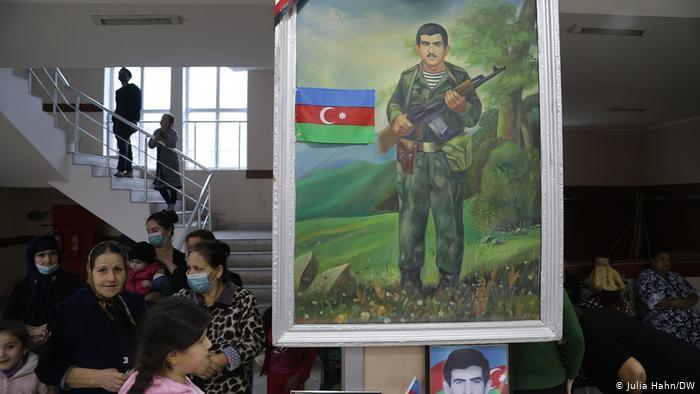 A decades-old conflict: the region has been controlled by Armenian separatists since Azerbaijan's government lost control in a territorial war from 1988 to 1994. A fragile ceasefire has been in effect since. The painting in a school in Barda honours a soldier who died 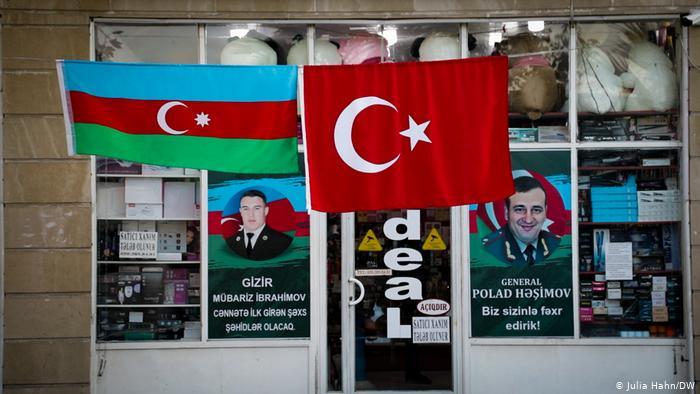 International intervention? Propaganda and war rhetoric govern everyday life in Azerbaijan, which is ruled by an authoritarian regime. The government, in Baku, receives weapons and expressions of solidarity from Turkey. Russia is the protective power for Armenia's government, in Yerevan. Observers warn that the regional powers could actively intervene in the conflict 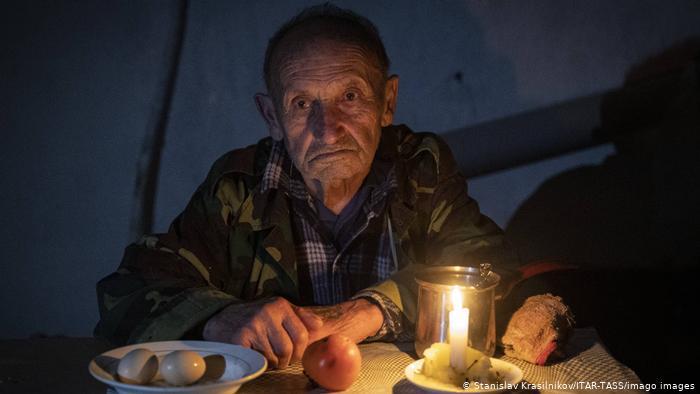 Holding out in shelters: regional authorities estimate that half of the residents, or 75,000 people, could flee the fighting. Residents who remain continue to hold out in basements and shelters 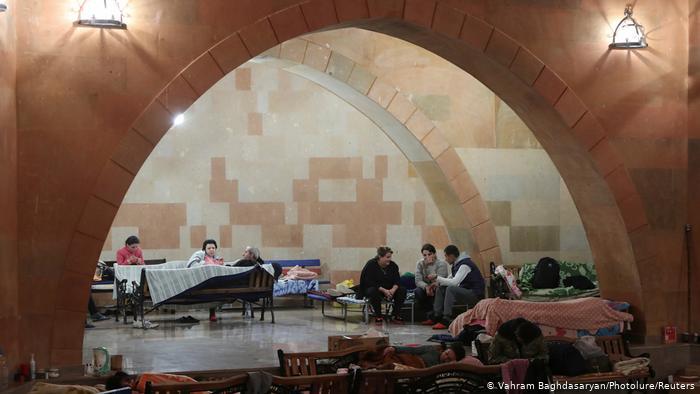 The coronavirus in a conflict zon: life in shelters has become routine for many Stepanakert residents. The rooms are crowded and poorly ventilated. The people are safe from the bomb attacks, but doctors warn of a rapid spread of the coronavirus. There are no officials figures, but some doctors have estimated that about half of the shelters' residents test positive on a daily basis 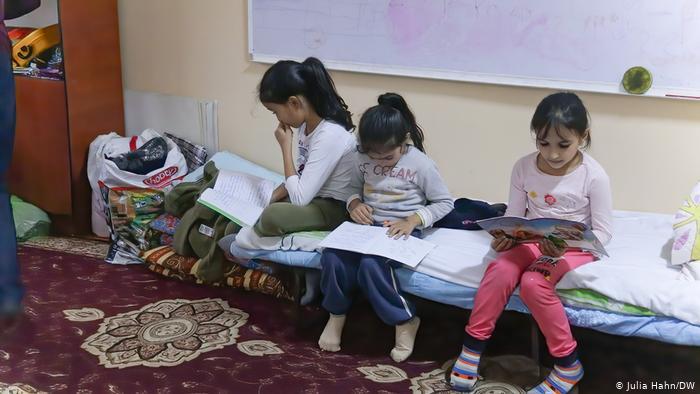 Classrooms as emergency shelters: people fled the fighting in Azerbaijan, too, including from the town of Terter, which is right on the front. Some found refuge in neighbouring Barda, about 20 kilometres from Nagorno-Karabakh, where schools have been used as emergency shelters since the end of September. But they are not safe either 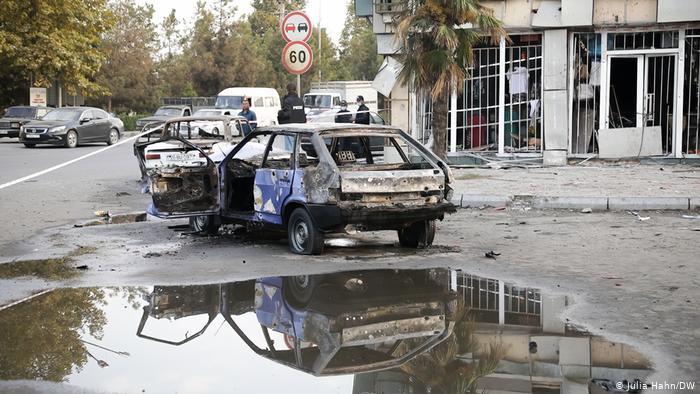 The front approaches: several buildings were destroyed and cars burned out during an air raid on Barda a few days ago. Azerbaijani authorities reported at least 21 dead and dozens injured. The Armenian government denied the attack, but Azerbaijan's president, Ilham Aliyev, pledged "retaliation on the battlefield" and "revenge" 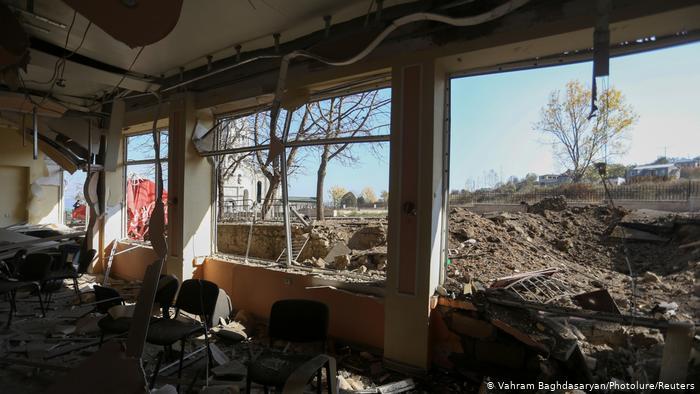 No foreseeable peace: the fighting continues. The government of Azerbaijan has demanded the complete withdrawal of Armenian troops from Nagorno-Karabakh. Armenia's prime minister, Nikol Pashinyan, has officially asked Russia for help. The Foreign Ministry has pledged Russia's "necessary assistance" should the fighting shift to Armenian territory

END_OF_DOCUMENT_TOKEN_TO_BE_REPLACED
Social media
and networks
Subscribe to our
newsletter