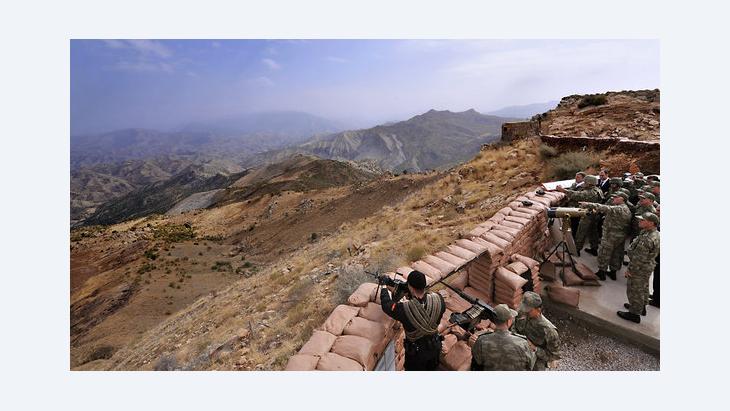 Turkey's head of government Recep Tayyip Erdogan has led his nation into the modern age. He could bask in his success, but while skyscrapers shoot up in Istanbul, other parts of Turkey still languish at levels comparable to those of developing countries. The Kurdish conflict is partly to blame, and if Erdogan is to avoid squandering his achievements, he must at last secure peace. Commentary by Christiane Schlötzer

﻿Before long, six minarets will loom skywards from Istanbul's highest hill, the Camlica, which has the best view of the Bosphorus. The new mosque has been planned in retro-Ottoman style. It is expected to accommodate more people than Istanbul's main Sultanahmet mosque, thus far the only one in Turkey to have six domes. The new building is a headache for urban planners, but Erdogan is upbeat. After ten years in office, he is keen for his city to gain a landmark in a location that can be seen "from all sides". The Prime Minister doesn't appear to be bothered by those critics who point out that Islam values modesty.

Turkey has now been governed for a decade by Erdogan and his Sunni-Islamic Justice and Development Party, or AKP. The AKP has won three parliamentary elections improving on its previous result on each occasion, latterly to a 50% share of the vote. If everything goes to plan, the Prime Minister will become President in 2014. Even before that, he will have been in office longer than any Turkish head of government since 1946, when the republic was first introduced to a multi-party system. 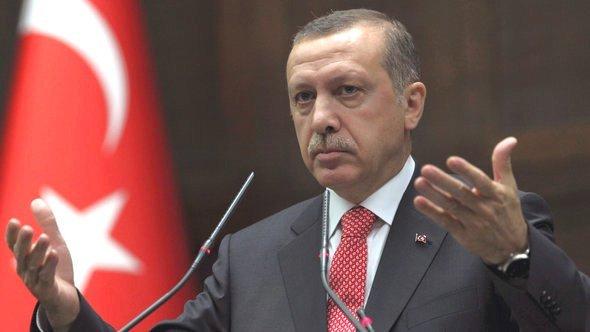 "Turkish-style Putinism": Prime Minister Erdogan has done more to comprehensively modernise the nation than all his predecessors. But, says Christiane Schlötzer, his very power is now becoming its greatest threat

​​Erdogan, the conservative rising star from a poor district of Istanbul, has done more to comprehensively modernise the nation than all his predecessors. Turkey has broken with many taboos, it has opened itself up, the economy is booming. The crisis in Europe is hurting exporters to some extent, but there are many markets for Turkish goods in Asia and Africa. Erdogan's diligent AKP could be basking in its success. But as it turns out, its very power is becoming its greatest threat.

Erdogan is experiencing what many long-term rulers sense: The erosion of power from within; through corruption and cabals, nepotism and a lack of criticism. The 58-year-old responds with an iron fist to dissenters within the ranks of his own party. When the AKP leader in the Kurdish metropolis of Diyarbakir recently warned that the party was losing the support of religious Kurds, he was forced from his post.

As a result of Erdogan's authoritarian style, even within the AKP there is little support for a presidential system that the Prime Minister would like to tailor to his own requirements by amending the constitution. Turkish-style Putinism – for many Turks, that's too much of a good thing.

The Kurdish conflict sets the nation back

The unfinished democratisation process represents even more of a danger to the successful Turkish model. There are however many attempts underway to deal with dark chapters in the nation's history. A parliamentary commission and courts are addressing the issue of the unsolved murders of the sinister 1990s. Even former President Kenan Evren is now being questioned by a judge, 30 years after his coup, by video conference from his sick bed.

The images recall those of ousted Egyptian dictator Hosni Mubarak, who lay on a stretcher in a courtroom in Cairo. Coups, torture, police violence – Turkey shared this unfortunate tradition with other MENA nations and is a traumatised country to this day. Processing the past is without doubt of paramount importance.

As far as the present is concerned, the situation is even less favourable. There are still anti-terror laws in place that put hundreds behind bars for putting up posters or writing propaganda flyers. These laws affect the Kurds in particular. Although he has been in power for 10 years, even Erdogan has not managed to put an end to the bloody Kurdish conflict. 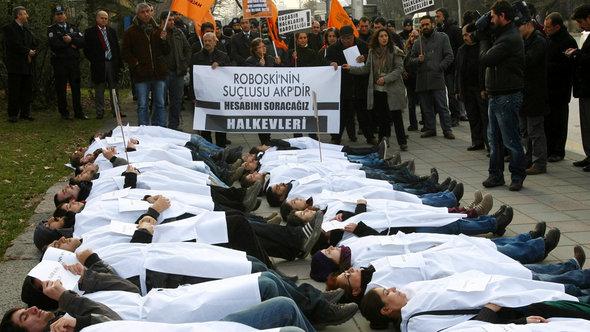 "Historical chance": Members of a pro-Kurdish party stage a protest against the Turkish government in Ankara on December 28, 2012 on the first anniversary of a Turkish military air strike aimed at Kurdish rebels that killed 34 civilians at the Turkey-Iraq border. The banner reads "The AKP is responsible for the Uludere massacre. It will pay for it."

​​The war between the Turkish military and the militant Kurdish workers' party the PKK has claimed more than 40,000 lives since 1984. Casualty figures spiked again in recent months, with many soldiers and even more Kurdish fighters falling victim to the crisis. The conflict means parts of Turkey languish at levels comparable with those of a developing nation, while Istanbul sees the construction of skyscrapers and quirky minarets.

One in every five to six Turkish citizens is a Kurd, no one knows the exact figure. The conflict is also dividing the Kurdish community. It is also putting distance between Turkey and Europe, and weakening its foreign policy hand.

The Turkish government is among the fiercest opponents of Syrian dictator Bashar al-Assad, and aids the Syrian opposition movement however it can. Before the civil war, Syria was the gateway to the Arab world for Turkey, and Ankara hopes that role will be restored. Turkey has high hopes that its neighbour will be an ally, with a free market economy like that of Turkey and preferably led by a Sunni government.

But when Assad falls, a Kurdish state of sorts could be established on the Syrian side of the border with Turkey. And in contrast to the Iraqi Kurds, with whom Ankara now has optimal trade relations, the Syrian Kurds are waving the flag of the PKK. This also explains the haste with which Ankara is now trying to secure peace with its arch enemy.

This quest for peace is notable for the fact that it is no longer taking place in secret, but in more or less full public view. Turkish media reports are bulging with the supposed details of negotiations between intelligence service agents and PKK founder Abdullah Öcalan, in detention on the prison island of Imral. The reports may be difficult to verify, but the sheer volume of details would suggest that Turkish media are being fed information by the government. This gives rise to the suspicion that in exchange for the much hoped-for disarming of the PKK, Turkish society is being groomed for a sweeping amnesty. This would represent a huge step for Turkey, an opportunity for it to shake off the shackles of the past.

It is time for change

But there are still many hurdles and pitfalls along the way – as the recent murder of three female members of the PKK in Paris shows. One of the women was a founder member of the movement, which is still categorised as a terrorist organisation in Turkey and Europe. She apparently retained her associations with the PKK until the last – but she was no longer a fighter. The killer's message could read thus: If you want peace, then you're not safe anywhere, not even in exile. 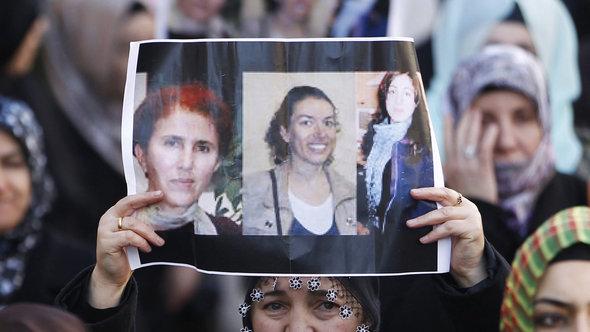 "If you want peace, then you're not safe anywhere, not even in exile." Members of the Kurdish community demonstrate in the streets of Marseille, 10 January 2013, over the murder of three Kurdish women activists. One of the founding members of the militant PKK, Sakine Cansiz (left), was among the victims

​​The murders could trigger further assassinations and acts of reckoning within the PKK. They must not delay the peace process. Even the Turkish opposition – with the exception of the extreme nationalists – is throwing its weight behind the government in Ankara on this issue, something it very rarely does. The time for change is long overdue.

This strengthens Erdogan's hand, and he could now push away the shadows of the past. But then whenever the EU demands domestic reforms such as the abolition of anti-terror laws, guaranteed media freedom and an end to arbitrary police conduct, all the excuses usually cited by Ankara would lose their validity. Turkey would nevertheless really have something to celebrate as Erdogan marks 10 years in office. With or without new minarets.

As Syrian camps housing families of Islamic State fighters get more dangerous, there are calls to bring children out, even if the mothers don't want to go. The idea of separating ... END_OF_DOCUMENT_TOKEN_TO_BE_REPLACED

The Kurds are under attack from two sides: from Turkey, and from Iran. The situation in their territories in northern Iraq is becoming increasingly desperate. Birgit Svensson ... END_OF_DOCUMENT_TOKEN_TO_BE_REPLACED

Hundreds of porters, locally known as ‘kolbars’, cross the mountainous border between Iran and Iraqi Kurdistan all year round. With Iran’s economic crisis deepening, ever more ... END_OF_DOCUMENT_TOKEN_TO_BE_REPLACED

The Syrian conflict remains insoluble for the time being. Yet Europe could start managing it better. By reorganising humanitarian aid supplies, becoming more involved in the ... END_OF_DOCUMENT_TOKEN_TO_BE_REPLACED

Bachtyar Ali sends the hero of his latest novel – "Mein Onkel den der Wind mitnahm" – literally flying. Jamshid is so thin after his years as a political prisoner that a gust of ... END_OF_DOCUMENT_TOKEN_TO_BE_REPLACED

In this essay, renowned Lebanese journalist and writer Hazem Saghieh asks whether the Arab Levant, which stretches from Iraq in the east to Egypt in the west, will remain an ... END_OF_DOCUMENT_TOKEN_TO_BE_REPLACED
Author:
Christiane Schlötzer
Date:
Mail:
Send via mail

END_OF_DOCUMENT_TOKEN_TO_BE_REPLACED
Social media
and networks
Subscribe to our
newsletter