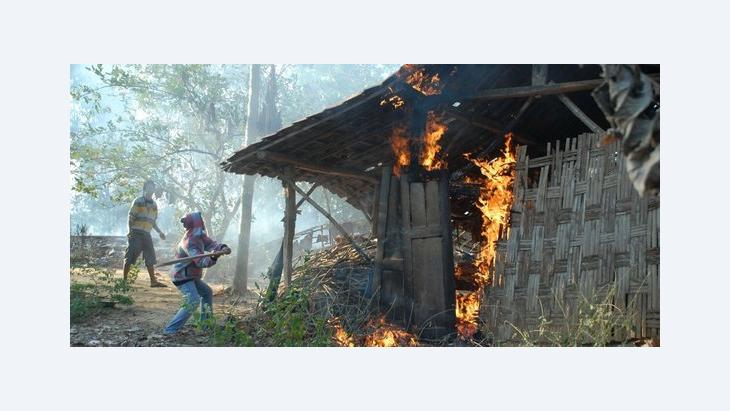 Persecution of Shiites in Indonesia

Hate Preachers and Incitement to Violence

Following a massacre of Shiites in Eastern Java, the Indonesian president, Susilo Bambang Yudhoyono, has called on the government and the police to provide special protection for the Shiite minority. But many Shiite Muslims remain frightened and insecure. By Andy Budiman

On 28th August, two Shiite Muslims were killed by an angry mob, dozens more were injured and the homes of Shiites were set on fire. The violence occurred after the Shiites had been accused of propagating false religious teachings.

The story didn't come from the Middle East or Pakistan, as one might have expected. The events happened in Sampang district on the Indonesian island of Madura in East Java.

Until now it has always been assumed that Indonesia was a moderate Muslim country with a democratic government which could be a model for other Muslim states. But increasing violence against groups like the Ahmadiyyah or now against Shiites is a clear warning to Indonesian society.

Intolerance is being taught

"Our area will now be free from heresy," Thohir al-Kaf, a Muslim preacher and East Javan religious scholar told hundreds of people, including children and young people. "But if anyone tries to spread such teachings in Sampang again, than snap him up, put him in a sack and throw him in the canal!" 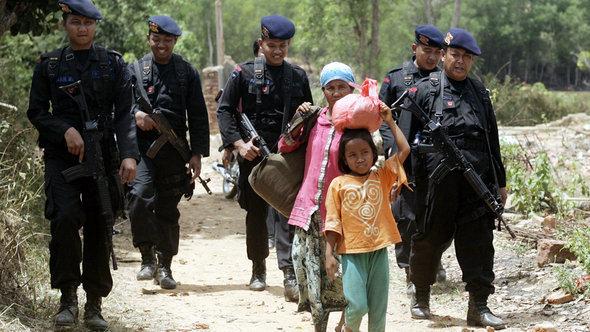 Under police protection: Shiites flee from persecution by extremists in Sampang district on the island of Madura

​​Minority religious groups have long accused Indonesia's president, Susilo Bambang Yudhoyono, of doing nothing to protect them. For some time, it's been possible to observe hate campaigns against the Shiite minority. In late December 2011, Sunni hardliners burned down the house of the Shiite leader Tajul Muluk, who was in prison serving a two-year sentence for allegedly insulting Islam.

So the tragedy of 28th August is evidently the result of the hatred that was sown long before. Hundreds of people were involved in hunting down, abusing and killing the two Shiites. Their bodies were covered in wounds made by knives and other blades.

"There's been Shiism in Indonesia for centuries," says Professor Azyumardi Azra, an expert in Islam and the Middle East at the Syarif Hidayatullah State Islamic University in Jakarta. "And until now there have never been problems between the two communities of the kind that we are seeing now."

According to Azyumardi Azra, this hatred was imported into the country by Indonesians who had studied in Saudi Arabian religious universities, as well as by Salafist groups: "They are the ones who promote a polarisation between Shiites and Sunnis."

It all began in the 1980s during a conference in Jakarta, when graduates of Saudi Arabian universities called on the then president, Suharto, to ban Shiite teachings in Indonesia. Azyumardi Azra says now, "Suharto took the right decision then when he refused to agree to the demand." 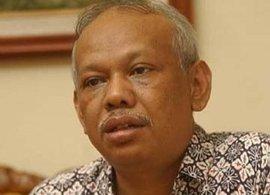 Prof. Azyumardi Azra: "There's been Shiism in Indonesia for centuries, and until now there have never been problems between the two communities of the kind that we are seeing now"

​​The export to Indonesia of Wahhabism or Salafism really took off after the Islamic Revolution in Iran in 1979. Saudi Wahhabists were worried by the political developments there. They exported the Wahhabist idea in order to create a counterweight to the policies of Tehran, which was expanding its influence on countries with Muslim populations, including Indonesia. The Wahhabists sent aid in the form of money and books to the Indonesian mosques, and they founded social welfare organisations and their own mosques.

The consequences of the blasphemy law

In a speech held on Indonesia's national day in 1964, President Sukarno used an Italian term to describe the political situation of his time: "vivere pericoloso" – living dangerously. It's a term which well describes the reality for many members of minorities today.

Following the fall of the Suharto dictatorship and the start of the so-called reformasi-era, the persecution and discrimination of minorities has only increased. They are subject to pressure not just in the form of public attacks, but politically and legally as well. Radical groups have for some time been abusing the country's blasphemy laws to put pressure on people with other religious views.

In West Sumatra, for example, the civil servant Alexander Aan was given a two-and-a-half year prison sentence and a fine of 100 million rupiah (about 8,000 euros) for running a Facebook group called Minang Atheists. He was found guilty of insulting Islam.

In March 2012, Andreas Guntur, leader of a spiritual movement called Amanat Keagungan Ilahi ("Message of the divine glory") was sentenced to four years for blasphemy.

Members of the Lia Eden group were also imprisoned on the grounds that they had broken the blasphemy law.

And that's not all: the Setara Institute for Democracy and Peace has just reported that there's been a noticeable increase in the use of the blasphemy law, which is Article 156a of the criminal code and Article 4 of the Law to Prevent the Practicing of Religion and Against the Abuse and Dishonouring of Religion.

Home
Print
Newsletter
More on this topic
Violence against Minorities in Indonesia: Democracy without ToleranceIndonesia's Blasphemy Law: The Regulation of Faith by the StateInterview with Franz Magnis-Suseno: ''Freedom of Religion Must Also Apply to Minorities''
Related Topics
Democracy and civil society, Human rights
All Topics

Turkey's parliamentary and presidential elections are scheduled for June 2023. But they are already casting a shadow. While the opposition is calling for early elections, ... END_OF_DOCUMENT_TOKEN_TO_BE_REPLACED

In his book "Ground Zero: 9/11 und die Geburt der Gegenwart" (Ground Zero: 9/11 and the Birth of the Present) Islamic scholar Stefan Weidner analyses the consequences of the ... END_OF_DOCUMENT_TOKEN_TO_BE_REPLACED

The rollout of coronavirus vaccines in the Middle East and North Africa is already taking place on a massive scale, with the United Arab Emirates leading the way. Nevertheless, ... END_OF_DOCUMENT_TOKEN_TO_BE_REPLACED

The Prophet Muhammad never executed anyone for apostasy, nor encouraged his followers to do so. Nor is criminalising sacrilege based on Islam’s main sacred text, the Koran. In ... END_OF_DOCUMENT_TOKEN_TO_BE_REPLACED

Surging coronavirus cases in many parts of the world have overshadowed the start of this year's Muslim holy month of Ramadan, with festivities once again curtailed by contagion ... END_OF_DOCUMENT_TOKEN_TO_BE_REPLACED

As Qatar prepares to host the 2022 FIFA World Cup, the country has come under fire for its treatment of migrant workers, with some nations calling for a boycott of the contest. ... END_OF_DOCUMENT_TOKEN_TO_BE_REPLACED
Author:
Andy Budiman
Date:
Mail:
Send via mail

END_OF_DOCUMENT_TOKEN_TO_BE_REPLACED
Social media
and networks
Subscribe to our
newsletter