A Photographic Journey into the Past

In the Emirate of Sharjah, the exhibition "Focus Orient" debuts over 200 historic photographs from the entire Islamic world. All shot by Europeans between the late 19th and early 20th centuries, they show architecture, scenes of daily life and portraits in the Orientalist style. Georg Ossenbach reports from Sharjah 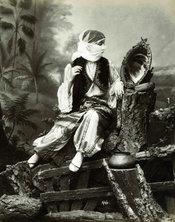 Not all the photographs in the exhibition have authentic historical value, but they say something about the 19th-century European enthusiasm for the Orient. This studio photograph was created for a European audience

​​ Sheikh Abdullah bin Salim Al Qassimi takes plenty of time. He scrutinizes each of the 225 historic photos from the Orient, listens to the explanations of the collector Thomas Walther and makes comments. The Sheikh, the third most powerful man in the Emirate of Sharjah on the Persian Gulf, has just opened the exhibition "Focus Orient" in the Sharjah Arts Museum.

"Why does the old falconer in Bougault's photo have two falcons?" he asks, adding that it is unusual, perhaps posed. Walther nods. 100 to 150 years ago, when these photos were taken in the Arabic world, photography was a cumbersome affair, and the exposure times were long. Realism was not the primary goal of the European photographers.

Sharjah is the third-largest of the seven United Arab Emirates (UAE), and nowhere near as wealthy as the neighboring, megalomaniacal Dubai, much less Abu Dhabi, which has the largest oil reserves in the UAE. But since 1972 Sharjah has been ruled by the art lover Sheikh Sultan bin Mohammed Al Qassimi, who studied in Egypt and England and has two PhDs.

Photos of Karnak, Luxor and Abu Simbel, devoid of people

His daughter Sheikha Hoor Al Qassimi is responsible for the visual arts, advised by the Cologne gallery owner Brigitte Schenk. She has been exhibiting contemporary art in the Emirates, in particular at the Sharjah Biennial, which has just opened for applications by artists.

​​ By presenting the photographs from the Walther Collection, never before shown publicly, the gallery owner has pulled off a scoop. The planned branches of the Guggenheim and the Louvre in Abu Dhabi or the plans for the opera house in Dubai may make headlines. But the look back at native Arab culture is an important complement to the meteoric takeoff into the future – in Dubai, just 50 years ago a town of pearl fishers' clay huts, an 800-meter-high office and hotel tower sets the pace of development.

Twenty years after the invention of photography, glass plates and calotypes replaced the daguerreotype. And the young photographer Maxime du Camp was at the cutting edge of technological development in 1849, when he accompanied Gustave Flaubert on his year and a half long "journey into the Orient". While Flaubert focused his exacting gaze on people, du Camp concentrated on landscapes and historical monuments. His pictures of Karnak, Luxor and Abu Simbel are almost devoid of people, who appear at most as extras to illustrate scale. Naturally, the pyramids were able to hold still as long as necessary for the extremely long exposure times.

Photographs as an expensive souvenir

At a time when literature and historiography reflected intellectual stagnation and a crisis of meaning in Europe, the first photos from the Orient were met with enthusiasm. The yearning for the exoticism and spirituality of the region that had produced three world religions brought men onto the scene who could provide the corresponding images.

A historical view of Cairo by Pascal Sébah, a leading photographer of the Ottoman Empire who was based in Constantinople

​​ The French Felix Bonfils settled in Beirut in 1867 and initially pursued photography on his own. Then he trained additional photographers who took pictures in his style for the "Maison Bonfils". The resulting images were published in France, most often as engravings. Above all, though, he sold his portraits and urban scenes as souvenirs for the tourists who flooded into the Holy Land.

The Berlin photographer W. Hammerschmidt had settled in Cairo as early as 1860, specializing in large-format street scenes. He too is featured in the Walther Collection now on display.

At that time it was an expedition for a photographer to leave the city. Equipment weighed up to 1000 kilos: the enormous camera, all the chemicals and plates, a special tent as a darkroom. Those who took the effort upon themselves were met with an as yet unfamiliar world. Bougault's photos of unveiled women smoking in public are a discovery, especially for viewers in Sharjah with its strict ban on smoking.

One commercially-oriented photographer was the Briton Francis Frith, who produced highly successful books of photography using the 500 glass negatives of his journeys to Egypt and Palestine from 1857 to 1859. Water-sellers, porters, indeed the entire working class sparked the curiosity of Henri Béchard. These are pictures that have a special immediacy for contemporary viewers. Of course they are carefully composed and arranged, but this does not detract from their documentary value.

A Vanished World between Marrakech and Damascus

Walther, himself a photographer, describes how he became fascinated with the Orient as a student in the 1970s, when he hitchhiked from Switzerland to the Sahara. He was very moved by the warmth of the people there, says Walther, and by the endless landscapes.

An entertaining lesson in ethnographic history: the exhibition helps give Gulf Arabs a feeling for the past. A photograph by Felix Bonfils

​​ Whether the background is the cultural-historical curiosity of photographers in past times, the commercial interests of postcard producers or even the colonial gaze of the outsider: the important thing is that the people of the Emirate are given an idea of the vanished world of the Arabs between Marrakech and Damascus. That is the view of the true mastermind behind Sharjah's cultural scene, the pragmatic and knowledgeable Hisham Al Madhloum, director of the Department of Culture and Information.

And anyway, the photographers shown at the exhibition produced contemporary art in their day and belong in a museum – certainly by now. That is how Brigitte Schenk, the exhibition's Cologne curator, sees the matter. And the best thing would be if the exhibition were purchased and could stay in Sharjah. That would be fine with the collector, Walther; collecting photographs is an expensive obsession.

At any rate, the ruler's nephew, Sheikh Abdullah, is visibly delighted. Except for the fact that the Emirates are short-changed in the photos of the time. That is true. No photographer had yet travelled that far in the 19th century. Sheikh Abdullah wants to take photos of Sharjah now, so that in 200 years people can marvel at the way it looked today.
The exhibition is open until January 2009.

Orient Photography by Hermann Burchardt
Far from Pathos
The newly rediscovered and reprinted Orient photographs by Berlin photographer Hermann Burchardt from around 100 years ago appear startlingly unstaged and free of the embarrassing voyeurism demonstrated by some of his contemporaries. Andreas Pflitsch reports

Seventh Sharjah Biennial
Exploratory Artistic Drilling in the Gulf
Sharjah is the third largest of the seven United Arab Emirates and is regarded as the cultural centre of the federation. The Biennial was intended to display local activity, but the seventh Biennial has shown that the show now has international status. By Samuel Herzog

END_OF_DOCUMENT_TOKEN_TO_BE_REPLACED
Social media
and networks
Subscribe to our
newsletter