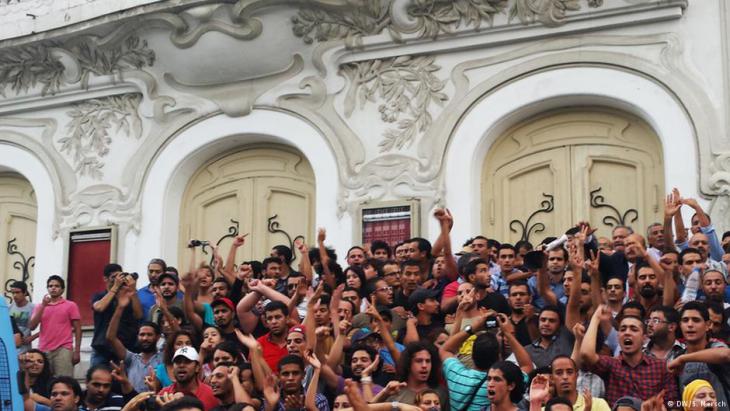 Tunisia: sweeping history under the carpet rather than confronting the past?

A proposed law designed to provide amnesty for corrupt businessmen is causing uproar in Tunisia. Opponents accuse the government of subverting the reappraisal of the country's dictatorial past. Details supplied by Sarah Mersch in Tunis

"We don't forgive," shout a few dozen protesters gathered in front of the Tunis City Theatre. They are closely encircled by police. For a week now, Tunisian citizens have been protesting on the streets almost every day. Most demonstrations are quickly dispersed by police, using truncheons and tear gas.

As a result of terrorist attacks on a museum in March and a beachfront resort in June, Tunisia has been under martial law for the last two months. The Tunisian government has used that law as an excuse to crack down on protests against economic amnesty.

The demonstrators' motto is "only the courts forgive." But court cases for corrupt officials, as well as businessmen and tax evaders, are not part of the new law proposed by President Beji Caid Essebsi. Instead, guilty parties can look forward to complete amnesty if they turn themselves in and pay back the misappropriated funds plus 5 percent interest per annum. The money is supposed to go into empty government coffers, which the president hopes will then spur investment.

"There are many businessmen that are in a position to help Tunisia get back on its feet financially, but they are scared," says Essebsi. The "law for economic reconciliation" is designed to give them legal assurances so that they can once again invest in Tunisian markets, he maintains.

Fear of a return to dictatorship

"The law is a step back towards the old mafia system," Chayma, a young demonstrator, complains. Ahmed Seddik, a parliamentarian from the leftist "Popular Front" has also joined the demonstrators to protest against "the return of the corrupt cronies of the dictatorship." He warns of a return to old structures and sees the democratic advances made since the revolution hanging in the balance. 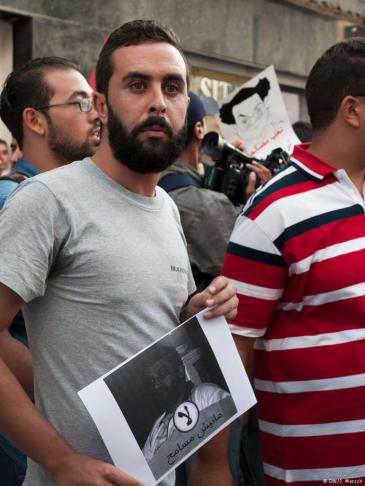 Against "the return of the corrupt cronies of the dictatorship ": many demonstrators fear that the democratic advances made since the revolution are hanging in the balance. The law would appear to be both constitutionally unsound and in clear contradiction of a reappraisal of Tunisia′s past

He criticises that the new law stands in clear opposition to the reassessment of Tunisia's dictatorial past and to the constitution. The federation of trade unions has also come out in opposition to the law in its current form. However, the ruling government parties enjoy a comfortable two-thirds majority, essentially ensuring passage of the law.

According to the Tunisian constitution, which was ratified in January 2014, the truth commission is in fact responsible for the investigation and reassessment of financial crimes. Yet, the first year of its four-year mandate has passed without any noteworthy progress. Several thousand victims have submitted their cases; however, neither the public hearings that were scheduled for this past spring have taken place, nor have the cases been forwarded to the judiciary.

Instead, there is in-fighting in the commission. Six of its 15 members have resigned, or been relieved of their posts. The reasons cited for the turbulence have been political differences and criticism of the leadership style of commission chairwoman Sihem Bensedrine.

Bensedrine fears that should the new law pass, the commission would lose half of the cases that it is currently reviewing. "The truth commission has been reduced to a wailing wall: drop by, present your grievance, and go home. For we no longer have the right to investigate individual cases, and our work will be of absolutely no consequence." Because, according to the head of the truth commission, without an independent investigation there will be no way to understand how businesspeople could so easily enrich themselves at the expense of the people. However, she argues that this is utterly essential in order to make sure that such a situation cannot be repeated in the future. Parliamentarian Seddik says that the problems of the truth commission are no excuse for ending the reassessment of Tunisia's dictatorship.

Lawyer and university professor Salsabil Klibi is also critical of the proposed law. She says it has no provisions for an independent judicial commission to investigate corruption cases, but rather turns that task over to a group of representatives from various ministries within the government. As there seem to be no alternatives to the proposed law, Klibi advocates a redrafting of its text. She thinks the principle of uncoupling financial issues from the ineffective truth commission in order to speed up the process is nevertheless necessary. "Unfortunately, we have to discuss this purposefully, because we have to make headway, even if we all agree that we have had enough of these crooks."

The proposed law is to be discussed in parliament soon. In the meantime, opponents are calling for nationwide protests against it this coming Saturday.

Tunisia's President Kaïs Saïed has assumed executive powers in his country in a highly controversial and possibly unconstitutional manner, fuelling fears of an impending ... END_OF_DOCUMENT_TOKEN_TO_BE_REPLACED

Arab women played a leading role in the protest movement of 2011. Since then, ongoing social transformation has had a considerable impact on their lives. What is their assessment ... END_OF_DOCUMENT_TOKEN_TO_BE_REPLACED

Recep Tayyip Erdogan, disappointed by the European Union’s reluctance to integrate Turkey into its ranks, has re-directed his country’s diplomacy toward the Maghreb and Africa to ... END_OF_DOCUMENT_TOKEN_TO_BE_REPLACED

The rollout of coronavirus vaccines in the Middle East and North Africa is already taking place on a massive scale, with the United Arab Emirates leading the way. Nevertheless, ... END_OF_DOCUMENT_TOKEN_TO_BE_REPLACED

Tunisia has launched a successful transition to democracy, but difficult economic and social times lie ahead. According to political scientist Said AlDailami, Europe should focus ... END_OF_DOCUMENT_TOKEN_TO_BE_REPLACED

END_OF_DOCUMENT_TOKEN_TO_BE_REPLACED
Social media
and networks
Subscribe to our
newsletter