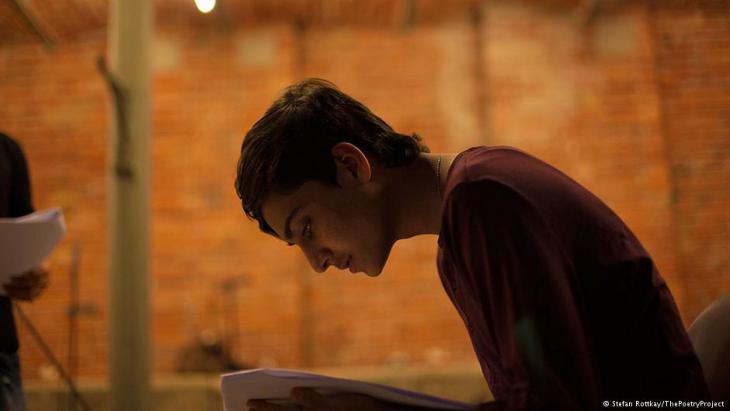 Poems by young refugees
Holding back the tears

A writing project has turned young refugees from Afghanistan into poets. The creative talents read their work at the International Literature Festival in Berlin, where many listeners found themselves fighting back the tears. By Sabine Peschel

Berlin′s literary festival had not even officially begun, but one special event came hot on the heels of another. While Germany′s parliamentary president Norbert Lammert was still talking to the Algerian writer Boualem Sansal about his novel "2084. The End of the World", crowds were already queuing up for the "Poetry Project".

It′s 6 September, the evening before the festival actually opened. The event is a reading of poems by young refugees. It is to be an evening that no one present will ever forget. Not the six young people presenting their work under the spotlight in a packed venue – and none of the audience either. Of the special events on offer during his eleven-day reading and discussion programme, festival head Ulrich Schreiber announced this poetry evening as particularly outstanding. Self-promotion aside, he was to be proved right.

Across an eight-month period, the 14 to 18-year-olds from Afghanistan and Iran met up with their poetry mentors in Berlin for regular workshops. They all had one experience in common: they had travelled alone, some of them first from Afghanistan to Iran, where they had a difficult time, then later to Europe. "Be next to me and see / what happened to me" – so begins a poem by Yasser Niksada, the youngest in the small group. And in fact, using words and rhythm to capture their experiences, the refugees managed to reach not only the minds, but also the emotions of their listeners. They exposed their lives and thoughts – and the audience understood.

Susanne Koelbl, a foreign correspondent for "Der Spiegel" magazine with experience of Afghanistan, sees the project as a dialogue "between those born here and those who come from a country in which five car bombs have exploded on this day alone, killing dozens of people." It was Koelbl who launched the project, working regularly with the boys along with the lawyer and translator Aarash D. Spanta. No girls could be found to take part in the project because their families rarely send them on the dangerous journey to safety. 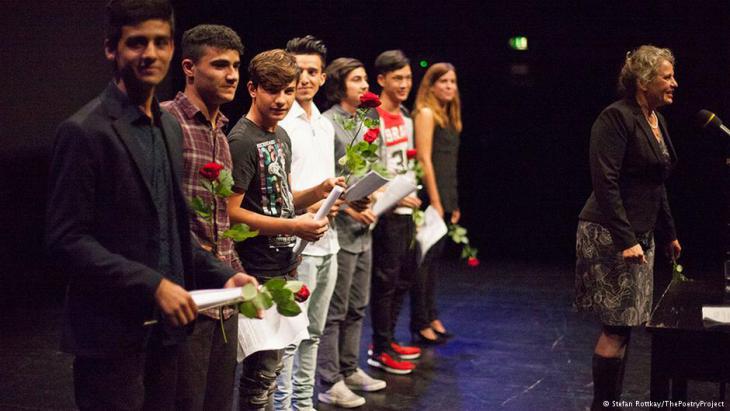 "Verses that will enter the collective memory of our time": Poetry Project participants on stage with Susanne Koelbl

Not all the original participants stayed with the project, finding it hard to summon up the necessary concentration and discipline for a cultural project, what with all their worries over residency status, bureaucratic requirements and the efforts of learning a language. Aarash Spanta, whose parents fled from Afghanistan to Germany in 1982, understands their position very well. Yet as a child of former refugees, he also knows how important it is to take one′s life in hand. To learn German, work hard at school, keep busy. It was important for him to make clear that a joint poetry project could only be a benefit in that sense.

"My eyes have seen the colour of unhappiness." Mohamad Mashghdost (18), the writer of this final line to an untitled poem, was not present at the event. He can′t read his own work; he is unwell. Others read on his behalf.

"What you can hear in these poems is perception, experience and emotion, translated directly into linguistic images. Kafka might have called them an ′axe for the frozen sea within us′," the festival programme quotes the literary scholar and philosopher Joseph Vogl.

Many of the poems confirm that view. They speak of fear and dread, loneliness and longing. No one in the audience remains unaffected when 16-year-old Mehdi Hashemi, an Afghan who grew up in Iran, talks about his loneliness: "You love and you are not loved. / You feel closeness and no one is there / for you to lean against." Many of the poems express a sense of longing for a lost father or mother, whether they have died or remained behind. It is heart-rending when 17-year-old Samiullah Rassouli stands in his smart white shirt, his hair gelled into a proud quiff and wishes in a poem to his father, "if only I could turn into the callouses on your hand."

Only once does the audience lose the lump in its collective throat, when Kahel Kaschmiri turns a poetic eye on Germany in summer. "Everyone wanders naked through the streets, lies naked in the park – and how do they manage to find something to eat at night?" Kahel will go on writing, as will Samiullah, who closed the event by presenting a "poem about love", previously read in Dari, in particularly impressive German.

"I′ve never heard poems like these before," were Uli Schreiber′s words. These are verses that will enter the collective memory of our time.

Home
Print
Newsletter
More on this topic
Theatre and the refugees: Getting the ball rollingArabic literature as a cultural asset: Uncharted watersRefugees in Germany: Working through the trauma
Related Topics
Languages, Literature, Refugees
All Topics

Rumi's poems, though generally stripped of their Islamic symbolism, are hugely popular around the world. Yet Islamic mysticism is still very much at the heart of these verses. ... END_OF_DOCUMENT_TOKEN_TO_BE_REPLACED

Very different Western reactions to the suffering in Ukraine and the Arab world show that there is a profound rift among cultures. Essay by Michael Young END_OF_DOCUMENT_TOKEN_TO_BE_REPLACED

The documentary "Nadia" tells the incredible story of Nadia Nadim, who was forced to flee from the Taliban as a child and became a football star. By Annabelle Steffes-Halmer END_OF_DOCUMENT_TOKEN_TO_BE_REPLACED

Three award-winning female directors appeal to the international film industry to save Afghan cinema. Supporting women filmmakers is more important than ever. By Christine Lehnen END_OF_DOCUMENT_TOKEN_TO_BE_REPLACED

Russia's ranking on the World Press Freedom Index has fallen again over the Kremlin's wartime censorship of the Ukraine conflict. From Myanmar to Mexico, journalists continue to ... END_OF_DOCUMENT_TOKEN_TO_BE_REPLACED
Author:
Sabine Peschel
Date:
Mail:
Send via mail

END_OF_DOCUMENT_TOKEN_TO_BE_REPLACED
Social media
and networks
Subscribe to our
newsletter