Polish pushbacks to Belarus go on as Ukrainians welcomed 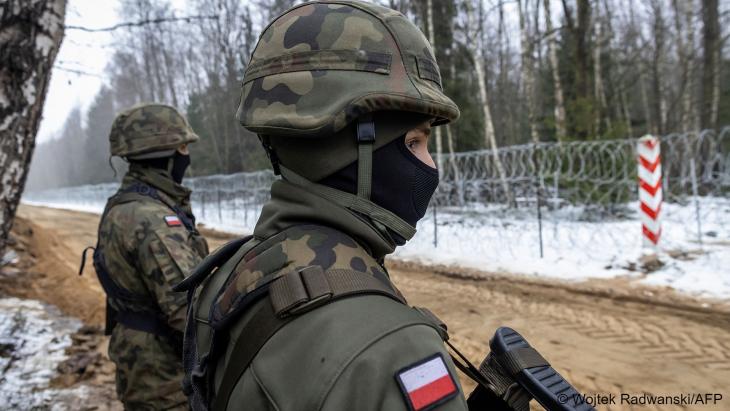 Poland has welcomed two million refugees from war-torn Ukraine at lightning speed and with open arms. Yet just north of that border, the EU member continues to push back those crossing from Belarus.

Since last summer, thousands of migrants and refugees – mostly from the Middle East – have come knocking only to be turned away by Poland, which sees their arrival as a kind of “hybrid warfare”.

Warsaw and others in the West have accused the Belarusian regime of orchestrating the influx by promising an easy entry into the EU in an operation backed by Moscow. Minsk has repeatedly denied the charge.

Last week, around 500 people tried to cross into Poland from Belarus.

"We get the sense that the order is to push back absolutely everyone, no matter their situation or health status," said Monika Matus, from the Polish activist network Grupa Granica (Border Group) which has been on the ground since the beginning. "These people can neither count on medical care nor any other care," she added.

He said, she said

The NGOs also denounce the "unprecedented" legal proceedings against their activists.

"Serious criminal accusations are being levelled for having provided humanitarian assistance or shelter or driven these people from the woods to a safe place," said Jaroslaw Jagura, a lawyer with the Helsinki Foundation for Human Rights. "Organising illegal border crossings is punishable by eight years in prison."

Yet, Polish border guard spokeswoman Anna Michalska offers a whole different view of the situation. She said only migrants on their way to Germany are being pushed back. They "are ordered to leave Polish territory and are escorted back to the border," Michalska told journalists.

She insisted that a medical consultation was available for anyone requiring one and that those hoping to stay in Poland can "always" apply for asylum. NGOs call these declarations "lies".

The resulting he-said-she-said situation is difficult to verify in person, as the immediate border zone has been closed off to non-residents, including reporters and humanitarian organisations, since September in a decision taken by the nationalist government.

A tale of two borders

It has also sent several thousand soldiers there and begun building a new wall expected to cost 350 million euros. At this border "there is just a barricade and swamps" that await the migrants, Matus said.

She added that Belarusian officials have now "evicted" those who remained in their migrant centres, or "the weakest, families with children, many children, pregnant women".

"They are the ones trying to cross the border now," she added, saying the Polish border guards "are pushing them all back."

Last weekend, activists lodged a complaint with prosecutors against the border guard for alleged pushbacks of 12 people including handicapped individuals and one pregnant woman.

"They once again found themselves in the woods where the temperature drops to minus three degrees Celsius," Helsinki Foundation for Human Rights lawyer Marta Gorczynska told journalists.

Earlier this week, a Polish court ruled in favour of three Afghans who had been pushed back despite their request for asylum.

The approach taken by Polish officials regarding those they call migrants – who in some cases are actually refugees fleeing war – as well as humanitarian organisations and journalists has been denounced by representatives of the United Nations, European Commission and Council of Europe, to no visible effect.

At the same time, by welcoming huge numbers of people running from Russia’s invasion, Poland has built up an image of itself as open and compassionate in the eyes of the world.

That makes it ever "harder to understand why on the one hand helping those fleeing Ukraine is desirable, rewarded and lauded while on the other hand helping people at the Polish-Belarusian border is stigmatised and criminal," Jagura said.     (AFP)

END_OF_DOCUMENT_TOKEN_TO_BE_REPLACED
Social media
and networks
Subscribe to our
newsletter