Political Islam in Tunisia
Who's Afraid of Rachid Ghanouchi?

The role of the Islamists in the political future of post-Jasmine Revolution Tunisia is now the topic of feverish debate. While some fear the establishment of a theocracy, others would like to see political Islam tolerated – as evidence of the country's new pluralism. Alexander Göbel reports 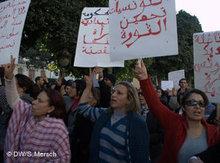 "We don't want a theocracy in Tunisia, we want democracy." – Many women in Tunisia fear a silent Islamization of the country's politics and society

​​ Every day, demonstrators are still taking to the streets of Tunis. On this occasion, it is the turn of Tunisian women. Most are dressed in modern fashion, in jeans and a T-shirt, skirts or business suits. Like the lawyer Zouhair Mahlouf, who spends her lunch hour at the rally. "We want the rights of women to be protected, we don't want Tunisia to go back to the Middle Ages, and we want respect for the role of women in society," she says. "We don't want a theocracy in Tunisia, we want democracy."

A bikini reception at the airport

The lawyer is carrying a placard bearing the words: "No to the Islamists – no to Rachid Ghanouchi". Ghanouchi, leader of the Islamist Ennahda party, returned to Tunisia a few weeks ago after 20 years in exile in London. If many women had indeed followed the Facebook call to receive Sheikh Ghanouchi at the airport dressed in bikinis, Zouhair Mahlouf would have loved to have been there to witness it. It would have been a way for the women to show him just how permissive Tunisian society has become.

But then images of Ghanouchi's arrival were for some reminiscent of Ayatollah Chomeini's arrival in Iran, and many Tunisians were left feeling unsettled.

Their fears, however, are completely unfounded, says Ehhahda spokesman Ajmi Lourimi. The accusation that the group is anti-enlightenment and fundamentalist is a total fabrication, she says. "That's an ideological argument that's being used demagogically against us. The Islamists are simply demanding their place beneath the Tunisian sun!" 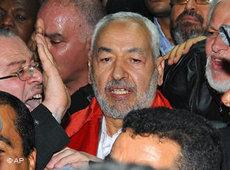 Islamist party leader Rachid Ghanouchi returned home on 30 January 2011 after two decades in exile. While his party "Ennahdha" was branded an Islamic terrorist group by Ben Ali, it is considered moderate by scholars

​​ Ennahda aims to take part in upcoming parliamentary elections and compares itself to the Turkish governing AKP. A party that has, after all, shown that Islam and democracy can be compatible, says Ajmi Lourimi. Tunisia is not a secular nation, he goes on. Ben Ali used the political system all these years to cement the division between religion and the state. "But in society, Islam still plays a major role. If the state is to be reconciled with its people, religion must be respected," says Lourimi.

The murder of a priest

This is a pressurised situation for Ennahda, because in Tunisia nerves start jangling whenever religious fundamentalism is involved. A Catholic priest was murdered recently, and supporters of a radical group gathered in front of the Tunis synagogue and shouted anti-Semitic slogans. Bars and brothels have been attacked, sometimes completely ransacked.

Mohamed Haddad, Professor of Religious Dialogue in Tunis, is relieved that Ennahda has in the meantime distanced itself from any form of violence. He says there is only one solution against radicalisation for Tunisia, and that is for the nation to take the courageous step forwards to a pluralist society. Exclusion simply has the opposite effect.

"This is a huge task, but if we continue to behave as though the Islamists don't exist, then there would be no difference between the new Tunisia and the old dictatorship. After all, a man like Ben Ali has consolidated his power by saying to the West: ‘It's me or the Islamists'," says Professor Haddad, who is optimistic that Tunisians will prove themselves to be in favour of radical change without religious fanaticism.

Tunisians are not afraid of the bearded ones, says Mohamed Haddad. He wants to live in a country that successfully manages a political and religious balancing act. A nation where people are free to decide whether they want to pray in a mosque – or drink beer in a bar. And, says the professor, he wants the Islamists to repeatedly face the crucial question: How are you really keeping pace with democracy?

Tunisia after Ben Ali
Whither Tunisia's "Jasmine Revolution"?
In his essay, Tunisian writer Mustapha Tlili reflects on the differences between the toppling of Tunisia's former President Ben Ali and the toppling of his predecessor, Habib Bourguiba, the secular nature of the recent uprising, and the likelihood of the Tunisian revolt triggering a domino effect in the Arab world

END_OF_DOCUMENT_TOKEN_TO_BE_REPLACED
Social media
and networks
Subscribe to our
newsletter