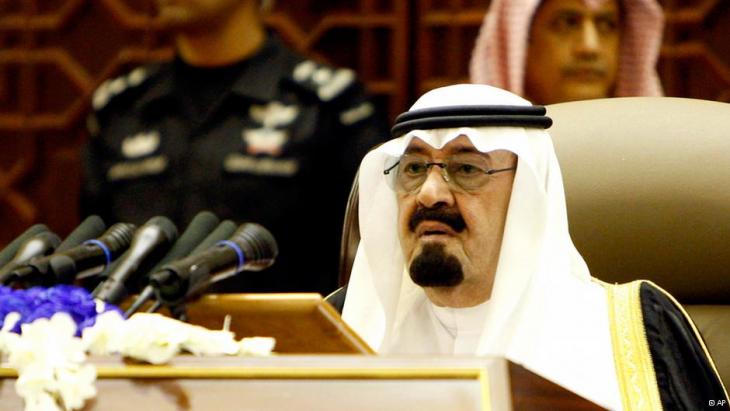 With economic aid packages running into the billions, Saudi Arabia is leading a campaign to manipulate Egyptian politics, shore up support for the army and eliminate its old rival, the Muslim Brotherhood. Report by Karim El-Gawhary

﻿The Muslim Brotherhood and President Muhammad Morsi had barely been removed from power before the autocratic rulers in the Gulf whipped out their cheque books and pledged several billion dollars in direct aid to the nation on the Nile.

Following the putsch, Saudi Arabia and the United Arab Emirates were the first to congratulate the interim president Adly Mansour, installed by the military, as well as the head of the military Abdel Fattah El-Sisi. The Saudi King Abdullah applauded the army for "bringing Egypt back out of a dark tunnel". UAE Foreign Minister Anwar Gargash commented: "The fact that the Egyptians have rejected an Islamist government represents a turning point for the region." 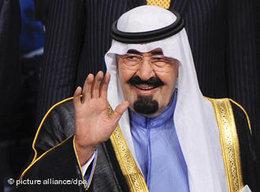 Saudi-Arabia's policy of reinstating old powers: "Any process of change in an Arab nation that could lead to a democratic future is a true horror scenario for the Kings and Emirs on the Gulf," writes Karim El-Gawhary

​​But the blessings were not only verbal ones. Saudi Arabia and the UAE pledged eight billion dollars to Egyptian state coffers. And this is just the beginning, was the message from Abu Dhabi. A few days later, Kuwait bumped this figure up by another four billion.

As far as Egypt is concerned, such cash injections are urgently needed. Currency reserves had shrunk from 36 billion to 14.9 billion since the ousting of Mubarak. Although a good portion of this had already been spent not by Morsi, but previously by the Supreme Military Council. Cairo was no longer able to pay for all of its fuel shipments.

It is therefore timely that Saudi Arabia is supplying two billion of the pledged funds in the form of oil. With this security in place, Egypt is now in a position to release its own strategic oil reserves. This has put an abrupt end to the long queues at petrol stations, one of the triggers for the mass rallies against Morsi.

But when Emirs and autocratic Kings on the Gulf reach for their cheque books, should this not sound all the alarm bells for the democratic future of Egypt? 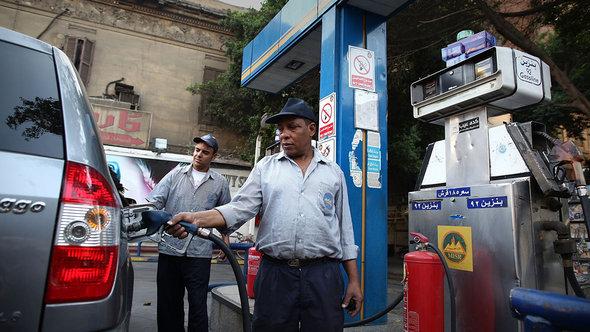 Fuel as a scarce commodity: Free shipments of oil from Saudi Arabia since the ousting of Egyptian President Mohammed Mursi have now alleviated problems with petrol supplies. Saudi Arabia is attempting to use economic aid to influence Egyptian politics

​​Saudi Arabia – a nation without parties and participation

First and foremost, it is surprising that Saudi Arabia, the mother of Islamic fundamentalism, is celebrating the fact that the Islamists have been forced out of office in Egypt. This is often explained by saying that Saudi Arabia has always supported the Islamist opponents of the Muslim Brotherhood, the more radical Salafists. The focus of the latter group was increasingly on instigating a process of social Islamisation and the introduction of Sharia to everyday life, while the Muslim Brotherhood propagate change through politics and an overhaul of institutions.

The Saudi King Abdullah again made it clear which of the two approaches he prefers in his Ramadan message this year: "The Kingdom will never allow political parties, as these only lead to conflict and failure," he explained.

And this brings us to the true reason why Saudi Arabia, of all countries, now wants to prop up Egypt in the post-Morsi era. The ideology of the Salafists versus that of the Muslim Brotherhood does not play the decisive role here. The reason why the Saudi autocrats detest the Muslim Brotherhood to such an extent is because the latter has sought legitimacy at the polling booth. An Islamist movement that does this is viewed as competition and as a direct threat to the Gulf states, because it questions their entire construct of God-given autocratic rule and monarchist succession – and not by way of a western concept, but an Islamist one.

Also, when the Palestinian group Hamas decided to take part in elections in the West Bank and Gaza, they were promptly dropped by Saudi Arabia. This is one of the reasons why Hamas later, periodically, looked to Iran for support. 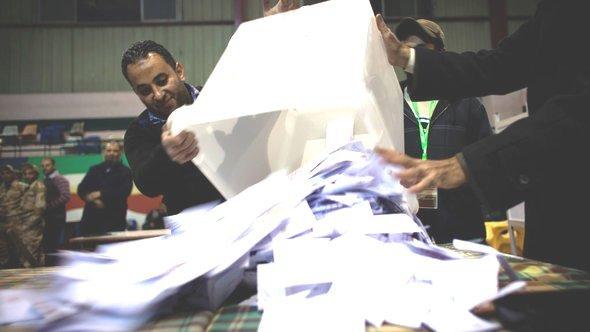 Each and every vote cast in free elections represents a defeat for Saudi Arabia. Karim El-Gawhary says the largest Gulf state is not primarily motivated to intervene because of the rivalry between the Muslim Brotherhood and the Salafists, but rather by the Muslim Brotherhood's attempts to seek political legitimization via elections

​​Anti-Brotherhood sentiment in the UAE

The rulers of the Emirates are also fervent haters of the Muslim Brotherhood. The week before the putsch in Egypt sentences were pronounced in what has become known as the UAE 94 trial. Human rights organizations have explicitly described this mass trial against 94 political activists in the Emirates as "fundamentally unfair".

Sixty-nine of the defendants were sentenced to serve prison terms of between seven and 15 years, for their alleged links to the Muslim Brotherhood and claims that they conspired against the rulers of the Emirates. They were accused, among other things, of proposing elections for a Shura council.

"Financial aid from the Gulf states to Egypt is borne of the fear that the largest Arab nation might progress further through democratic elections," says Christopher Davidson, Gulf specialist at Durham University in the UK, in explanation of the motives for these huge cash pledges. "The Saudis and the Emirates believe changes in Egypt are occurring in their favour and as always, they are using their cheque book to influence proceedings," he says in a telephone interview with Qantara.de.

A European journalist who has worked in the Gulf for many years and who asked to remain anonymous goes one step further when she says: "The Saudis quite simply want to buy the Egyptian transitional process." 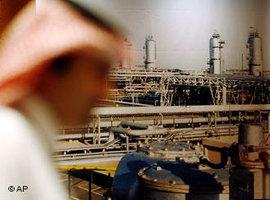 The Saudis want to buy the Egyptian transitional process with petrodollars. But it remains to be seen whether this strategy will succeed in stunting the democratization of the nation

​​The new Saudi engagement in Egypt also shifts the balance of regional power. The only Gulf sponsor of the Muslim Brotherhood, the Emirate of Qatar, which supplied Morsi with eight billion dollars and has never made a secret of its support for the Muslim Brotherhood, is now viewed as the biggest political loser in the Gulf region. Doha may have bet on the wrong horse, but it is putting a brave face on things.

But Qatar also praised the role of the Egyptian army in safeguarding national security and explained that it respected the will of the Egyptian people. Without making any reference to the Brotherhood, Doha has made vague promises to continue its support for Egypt. Qatar also wants to remain on board in Egypt.

The second loser is Turkey. Prime Minister Erdogan had also openly supported the Muslim Brotherhood, politically but also financially. Now he not only has to deal with the problem of Gezi Park, he must also expect that his influence on the most populous Arab nation will dwindle.

Saudi Arabia in favour of a Mubarak-style system

It is still unclear whether Saudi Arabian attempts to turn back the wheel in Egypt will be successful. The least it wants to achieve is to neutralise the democratic threat presented by regional power Egypt, a threat that challenges autocratic systems in the Gulf. For decades, this region has provided massive support to the Mubarak regime. Now it is hoped that the former structures of the security apparatus and Mubarak's old system of cronyism will be re-established.

"They shouldn't rejoice too soon," warns Davidson. "Any demonstration that brings several million people out onto the street is, in the end, a threat to the autocratic Gulf states, and the same goes for the 30th June," he says.

As long as the military in Egypt is pulling the strings, the political landscape will reorder itself after the toppling of Morsi. The Muslim Brothers have been booted out, but they must now reposition themselves. The party is already striking a more nationalistic, rather than an Islamist, tone.

It is too early to speculate on whether they will operate within or without Egypt's political system in future. The alliance against them will quickly fall apart when the old revolutionaries of Tahrir Square realise that the anti-Brotherhood rebellion also included many who participated in the reinstatement of old powers. The latter have a financially powerful ally in the form of Saudi Arabia.

After all, one thing is certain: Any process of change in an Arab nation that could lead to a democratic future is a true horror scenario for the Kings and Emirs on the Gulf.

The devaluation of the Egyptian pound combined with rising food prices is taking its toll on Egypt. More and more people are slipping into poverty. Karim El-Gawhary reports from ... END_OF_DOCUMENT_TOKEN_TO_BE_REPLACED

Chinese President Xi Jinping's visit to Saudi Arabia in December 2022 may have rattled Washington, but it simply highlighted the Arabs’ desire to diversify their foreign relations ... END_OF_DOCUMENT_TOKEN_TO_BE_REPLACED

Lebanon was long viewed as the Switzerland of the Middle East. Until relatively recently, billions were deposited in its banks. Gulf states were among the foremost investors in ... END_OF_DOCUMENT_TOKEN_TO_BE_REPLACED

At the end of every year, the team at Qantara.de gives you a run-down of the ten most-read articles on the site over the past 12 months. Here is a quick overview of the stories ... END_OF_DOCUMENT_TOKEN_TO_BE_REPLACED

According to a recent survey, half of all Iranians say that they have left Islam as a religion, while two-thirds believe Islamic law should be excluded from their legal system. In ... END_OF_DOCUMENT_TOKEN_TO_BE_REPLACED

Since Russia invaded Ukraine, Europe has been trying to find alternatives to Russian gas, inevitably zeroing in on the Arab Gulf states. In his commentary, Yemeni politician ... END_OF_DOCUMENT_TOKEN_TO_BE_REPLACED
Author:
Karim El-Gawhary
Date:
Mail:
Send via mail

END_OF_DOCUMENT_TOKEN_TO_BE_REPLACED
Social media
and networks
Subscribe to our
newsletter