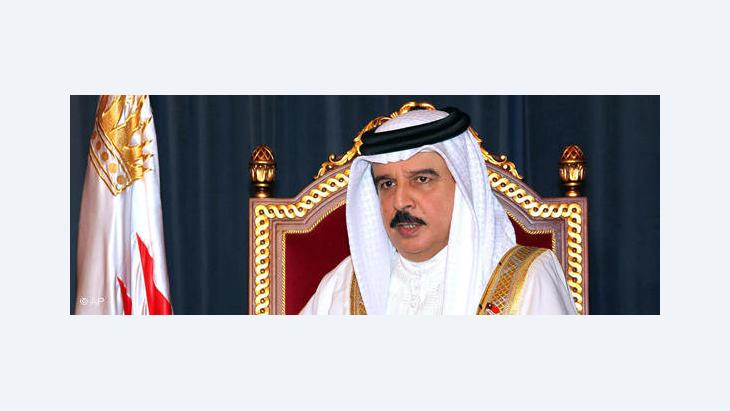 ﻿Bahrain's King Hamad bin Isa al-Khalifa has so far dealt with the protest movement in the Gulf state with the utmost severity. Now the authoritarian monarch is increasingly coming under pressure to introduce democratic reforms. Birgit Svensson reports from Manama

As if destroying the evidence might somehow mean that the protests never happened, Bahrain's royal family has drummed up every available mechanical digger, bulldozer, cement mixer and stonemason to give the roundabout at the entrance to the main market in Manama a facelift. Until a few weeks ago this was the site of the Pearl Monument, an iconic structure which from mid-February onwards became the focal point for a tent city of demonstrators, along the same lines as Cairo's Tahrir Square.

In Egypt, guides are already proudly showing tourists round the square where the Revolution took place; but the square in Bahrain is being razed. First the monument was demolished, and now the square itself is being levelled. The once symbolic traffic island and its surroundings look like a battlefield. Hundreds of cars lie abandoned, burnt out or shot to pieces, and each tells a horrific story. Children's clothing and women's scarves dangle from open doors.

Toys and small plastic seats have been hurled out and lie scattered on the sandy ground. Flat tyres; windscreens shot to pieces; half-empty cola cans and replacement computer parts, probably bought just beforehand in the nearby Dana Mall. The big articulated trucks are scarcely able to clear away so many wrecked cars, as the king has demanded, in revenge against his rebellious subjects.

Martial law was declared in Bahrain on March 15th. King Hamad bin Isa al-Khalifa called on his ally in Saudi Arabia for assistance in quelling the protests, which was done with unprecedented violence. Saudi tanks rolled in across the King Fahd Causeway, a 25km bridge that has connected the kingdom of Saudi Arabia with the island state of Bahrain since 1986. 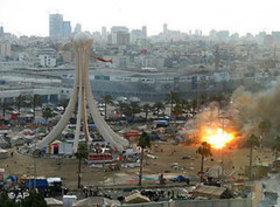 Strategies for dealing with the rebels: In March the Bahraini military destroyed the monument in Pearl Square, Manama, which had become a symbol of anti-government protest

​​After two and a half months of military operations 30 people were dead, hundreds more injured, and there had been more than 1000 arrests. Dozens of people disappeared without a trace, and at least 2000 lost their jobs because they took part in the protests.

The end of martial law was announced on 1st June, but the Saudi tanks and more than 5,000 soldiers from Gulf Cooperation Council (GCC) countries are still stationed in Bahrain. As a sign of gratitude to the "helpers" from neighbouring countries, the Bahraini ruling family is currently hanging Saudi flags everywhere and plastering giant posters of the Saudi king all over billboards. The population of Bahrain, which numbers just over one million, will soon realize who really has the say in their country.

The lifting of the state of emergency will not necessarily change anything, as we can see from the example of Syria. Two days after Bashar al-Assad lifted it there he gave orders for blanket military operations which are still going on.

Similarly, in the past few days the Bahraini government has also upped the ante: journalists have been arrested, and a 15-year-old boy was brought before a military court. Further attacks on demonstrators by the security forces must therefore be expected, regardless of whether or not there is a state of emergency. Saudi Arabia will never permit the introduction of democratic conditions in Bahrain.

Outcry against political disenfranchisement and legal discrimination: Tensions in Bahrain between the majority Shiite population and the Sunni royal family erupted at the start of this year

​​Fear that Iranian influence is spreading as far as the Saudis' own backyard has created unprecedented panic. If Bahrain's Shiite majority were granted the right to democratic elections, Riyadh is convinced that the days of the Sunni royal family in Manama would be numbered, and that if the Shiites were to get in, Iran too would automatically have a place at the table. The Shiite minority in Saudi Arabia, which is predominantly Sunni, might then also demand more rights.

This supposition is absurd, as Iran has only minimal influence in Bahrain. However, if the centuries-old confrontation between the two Muslim religious groups were once again to erupt and intensify, the violent clashes between Sunnis and Shiites in Iraq will only have been the start.

The Gulf states are currently playing a cynical double game. Qatar and Kuwait support the Libyan rebels in the war against their ruler, Muammar al-Gaddafi. The leadership in Doha went so far as to be the first Arab country to send planes to safeguard the no-fly zone. It was the first country after France, and the first Arab state, to recognize the rebel council in Benghazi as the legitimate political representation of Libya. Since then it has been selling the rebels' oil on the world market. Kuwait too recently transferred 120 million euros to the rebels in Benghazi. 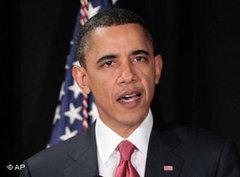 Pressure from Washington: US President Barack Obama criticized the aggressive action taken against peaceful demonstrators in Bahrain and urged the King to engage in dialogue with peaceful opposition leaders

​​But while both states support the protest movement against Gaddafi, in Bahrain they stand on the other side, and accept that the democracy movement there is being bludgeoned into submission. Furthermore, as members of the GCC – which in addition to Saudi Arabia also includes Kuwait, Qatar, Bahrain, Oman and the United Arab Emirates – they are even partly responsible for the lethal military operation.

Of these, Kuwait was the only country to react negatively when GCC troops marched in, but it was swiftly silenced by Saudi Arabia. Kuwait too has a large Shiite minority. Meanwhile, the Emir of Qatar has had not a single word to say about the situation in the neighbouring country just 35km away.

At the start of the uprising the Doha-based news channel Al Jazeera, initiated and substantially financed by the Emir, implemented a virtual news blackout on reporting from Bahrain – whilst broadcasting a multitude of special programmes on the other uprisings in North Africa and the Middle East.

However, as criticism of the situation in Bahrain became increasingly vocal, especially in the Western media, Al Jazeera too was eventually forced to change tack. In recent weeks it has run more reports about its neighbours. Now, in his speech about the revolutions in the Arab world, US President Barack Obama has also called on those in power in Bahrain to engage in dialogue with the protest movement. The King has set July 1st as the date for dialogue to commence.

Home
Print
Newsletter
More on this topic
Unrest in the Arab World: The Battle for BahrainUnrest in Bahrain: ''We are all Bahrainis; Not Sunnis, Not Shiites!''
Related Topics
All Topics
Date:
Mail:
Send via mail

END_OF_DOCUMENT_TOKEN_TO_BE_REPLACED
Social media
and networks
Subscribe to our
newsletter