A Love-Hate Relationship with Tehran

Although the Iranian writer Amir Hassan Cheheltan does not regard himself as a primarily political author, his novels are clear denunciations of Iran's social constraints and human tragedies. Volker Kaminski met him 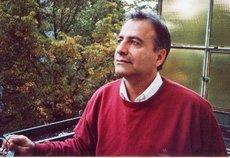 ​​ To Amir Hassan Cheheltan, Berlin must seem comparatively small. Accustomed to living in the 15-million metropolis that is Tehran, he is been spending a year in an apartment for visiting artists and academics on a quiet side street off West Berlin's flamboyant Kurfürstendamm.

When we meet, Cheheltan does in fact rave about megacities with their broad boulevards, millions of people and unceasing flows of traffic. Yet his is a clearly ambiguous affection for metropolises of the likes of Tehran; he does not overlook the dark sides of these huge cities sinking in clogged streets and poisonous fumes.

Yet he stresses that it is precisely the anonymity of a place like Tehran that offers him the personal space he needs and a certain freedom of movement, through its sheer size.

For a respected writer from modern-day Iran, the aspect of freedom plays a pivotal role. There is nowhere in his country he feels safer than in Tehran, Cheheltan tells me.

But it is not only megacities that appeal to him. He has also felt repeatedly drawn to European capitals such as Paris, London, Rome – and of course Berlin. As a novelist, he takes his material from the contemporary world around him, creating characters from today's Tehran, as shown in his novel Tehran Revolution Road, recently published in German translation.

Cheheltan has an impressive seven novels and several short story collections under his belt. Alongside his creative writing, he also works as a journalist for Iranian and German newspapers, a columnist in great demand who takes a stand on the events in his home country.

​​ Tehran is not only the central place in his life, but also a thread running through his writing. In his new novel he describes the city as a place of hell, even condemning it as a "devilish city" where the "murky air,... tumult and… anarchy… penetrate people to the core and inevitably amplify their destructive effect."

Anyone who addresses social problems and human difficulties in such a direct and realistic manner in Iran almost inevitably comes into conflict with the country's strict authorities, above all the state censorship board.

When we meet, he describes how much effort and patience critical Iranian writers need to publish their work. Things are looking better for him today, he tells me, than twenty years ago – when seven of his manuscripts were waiting for publication.

He was gradually able to publish his work, albeit always after reaching an agreement with the censors. His current novel Tehran Revolution Road, however, has not cleared that hurdle in Iran to date.

Yet Cheheltan does not regard himself as a primarily political writer. What interests him is tracing the causes of deformations in society by literary means.

Alongside the historical material he has made various use of in the past, it is the face of today's Tehran onto which he projects his human tragedies, revealing the city's inner conflicts. As the state's control extends across all areas of life – with regulations on private matters such as how to dress, what to eat and drink, read and write, how to raise children – conflict with the authorities is virtually inescapable.

No way out in a controlled society

As long as the Islamic government pursues the aim of forcing a certain lifestyle upon society, he tells me, he will attempt to counter it in his writing.

His novel Tehran Revolution Road paints a drastic picture of the effects of social constraints on the people living in that society. Although the book never refers directly to political processes or events, there is a tangible sense of how hopeless life is in a society under absolute control and ruled by violence.

Fattah, a successful hymen surgeon in the business of repairing young women's virginity before marriage since the Islamic Revolution, one day falls in love with one of his patients.

But Shahrsad is already promised to another, a young torturer in an infamous Tehran prison. Shahrsad knows nothing about Mustafa's brutal job and would even choose to marry him – were she to have a say in the matter.

Swayed by his money, Shahrsad's family decides to marry her to the wealthy surgeon after all. Yet Mustafa, robbed of his bride, brings this prospect to a cruel and ultimately tragic end.

Cheheltan sets these shocking events in a huge and confusing Tehran, lending plausibility to his accusations of "hellishness" page by page.

Drastic novel to "make you choke"

For Western readers, the events are so drastic, as one reviewer has written, that they "make you choke". Yet Cheheltan's writing is not untouched by irony, and despite all their mistakes and moral reprehensibility his characters remain perfectly normal individuals.

For Cheheltan, the prospect of publishing this and other novels in Iran in the long term is extremely important. He is certain he will be able to do so, but he seems reluctant to publish his books according to the wishes of the censorship authorities in the future.

For instance he recently staged a public protest against his nomination for a book prize awarded by the same institution. Cheheltan, becoming more and more famous even outside Iran and often invited to readings, most recently at the International Literature Festival in Berlin, still cannot imagine living anywhere else.

Iran, after all, is his mother country, the land of the language he loves.

END_OF_DOCUMENT_TOKEN_TO_BE_REPLACED
Social media
and networks
Subscribe to our
newsletter