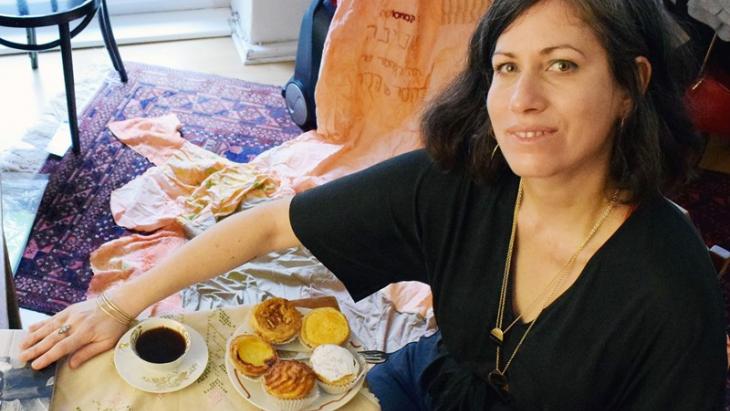 Berlin-based Israeli artist Adi Liraz works the history and stories of the women in her family into her fabric artworks, re-telling them for posterity. In the process, she challenges existing narratives about home, femininity and identity. By Ceyda Nurtsch

As the unpleasant January rain finds its way into every crack in Berlinʹs streets, a standard lamp illuminates Adi Liraz, sitting in her living room in a floor-length black dress. She is surrounded by metres of different fabrics, embroidered cloth and shining gold yarn as she sips Turkish coffee from a delicate little china cup.

How did it all start: sewing these textiles together, dying, embroidering and printing them with photos, symbols and texts, and using them in her performance art to transport stories?

"I will try to explain," says Adi Liraz. She is silent for a moment, thinking. And then it all comes tumbling out. Her personal story, the story of her family, the question of collective identity, the foreignness she feels in Berlin, politics in ´Israel-Palestine´, her role as a daughter and an artist, her own children. For her, it is all inter-related. "I have so much to say," she says, a little sheepishly, and I realise that her art is the product of many different, strong forces.

But one step at a time. Fundamentally, she tells me, it all started when she became a mother. Her family history began to force itself on her more and more. The stories handed down about her great-grandfather, a lawyer and committed Zionist in what is now modern-day Greece, who sent his daughter, Lirazʹ grandmother, to Israel.

Stories about this grandmother, who lost everything in the move and spent her whole life trying to return home. The stories about her children, including Adi Lirazʹ mother, who were taken away from their mother and sent to Greece, only later to be reunited with her.

"I wondered: what is home?" 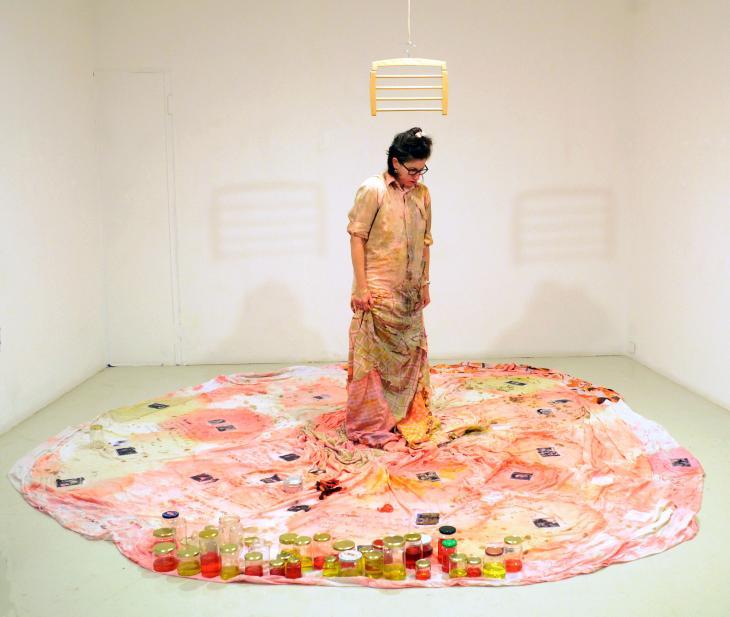 For Adi Liraz, who has herself been living abroad in Berlin for the last 16 years, these stories raise pressing questions: "I realised I had no connection to Tel Aviv, the place where I was born. So I started to wonder: what is home? What are roots? What ties me to different places? What about my mother, my grandmother?"

Her search takes her to the Ottoman Empire; more precisely to Ioannina, which is now part of Greece, where more than 90 percent of the Jewish population was murdered in the Second World War – a fact that remains little-known to this day. She finds that the family is not, as they had previously thought, Sephardic Jews, but Romaniotes, Greek-speaking Jews, the first Jewish community in Europe, resident there since the days of the Apostle Paul.

Adi Liraz begins to knit. Silk thread and velvet seem the right materials to use in telling the story of her family. The deeper she dives into it, the more questions arise. Such as: what knowledge do textiles transport?

"I am passing on my grandmotherʹs story"

On the shelves behind her hangs a long, dyed pink dress that she wears for her performance art. Its skirt covers the floor of the whole room. She sewed it together from bedsheets. She has sewn a rose onto the dress – the symbol of Ioannina. And a saying in Greek, written out in Hebrew letters: "If I forget you, Ioannina, let my right hand forget its skill." She has replaced Jerusalem, the city in the original, with Ioannina.

The lining of the back and collar of the dress is constructed from a fabric made by Palestinian women. "It was important to me to use this fabric, without making it my own. I deliberately used it for this part of the dress: the history of the Palestinian population is next to my skin and at the same time hidden; itʹs part of the collective identity of the place I lived in and I am part of a colonial structure."

Her statement: "I have no roots in Palestine. I have a very, very old history elsewhere, and this isnʹt based on racism, but on the co-operation of Ottoman Muslims and orthodox Greeks."

Many people see this as a provocation. "In Germany, alongside anti-Semitism there is also a philo-Semitism which is very racist against Muslims and blindly defends Israel. It is born out of peopleʹs sense of guilt and an attempt to atone for the sins of their forefathers. There is an expectation of what it means to be Jewish – listening to Klezmer music, for instance. And I donʹt fit that image in a lot of ways. I have the sense that I often canʹt speak freely, because itʹs difficult to have different narratives." That also means that a lot of the time, it isnʹt easy to find financial support. She is often too critical for Jewish organisations in Germany and she declines funding from Israel.

Adi Liraz is also politically active. She works as a co-ordinator for the Selam Shalom Initiative, is involved in a project researching Jewish life in the Ottoman empire and works as a guide at the Jewish Museum in Berlin. Her political agenda, she says, is simple: "I am in favour of justice for all and against any form of racism."

In spring, she will travel to Ioannina again. After the Second World War, some of the Singer sewing machines stolen by the Germans when they invaded Greece were returned to the community there. Adi Liraz is going to work with a group of art students, using these machines. The project is also about knowledge that has been lost. And the question of the extent to which the Ottoman empire can serve as an example of different communities living peacefully together.

Adi Liraz was born in Tel Aviv Jaffa in 1976. She is an interdisciplinary and performance artist who studied art in Jerusalem and Berlin. Alongside various performances and exhibitions in Berlin, her most recent project keeps taking her back to Greece. Liraz is also politically active, in projects including the Salam-Shalom-Initiative and the NOMEN collective, and works as a tour guide at the Jewish Museum in Berlin.

On 15 June, the "Islamkolleg" in Osnabruck officially launched its new training programme for imams in German. The college is intended to prepare Islamic theologians for their ... END_OF_DOCUMENT_TOKEN_TO_BE_REPLACED

For centuries, the great classical Persian author Hafez has inspired German writers. Translations, adaptions and homages have been created in his wake, and the process continues ... END_OF_DOCUMENT_TOKEN_TO_BE_REPLACED

Business in the Moroccan city of Tangiers is booming due to its location at the nexus of global trade routes. But many locals are failing to reap the benefits. What they crave ... END_OF_DOCUMENT_TOKEN_TO_BE_REPLACED

Morocco and the European Union are at cross purposes when it comes to the Western Sahara. And, as Germany does not support Moroccan claims to the territory, a major conflict has ... END_OF_DOCUMENT_TOKEN_TO_BE_REPLACED

Jewish voices are much more diverse than the public often sees. Jewish men and women who oppose the injustice of Israeli occupation in the West Bank deserve our respect and ... END_OF_DOCUMENT_TOKEN_TO_BE_REPLACED

They’ve already got the Louvre; they’ll soon have a Guggenheim Museum as well – and now the Emirates have added literature to their quest for cultural supremacy in the Arab world ... END_OF_DOCUMENT_TOKEN_TO_BE_REPLACED
Author:
Ceyda Nurtsch
Date:
Mail:
Send via mail

END_OF_DOCUMENT_TOKEN_TO_BE_REPLACED
Social media
and networks
Subscribe to our
newsletter