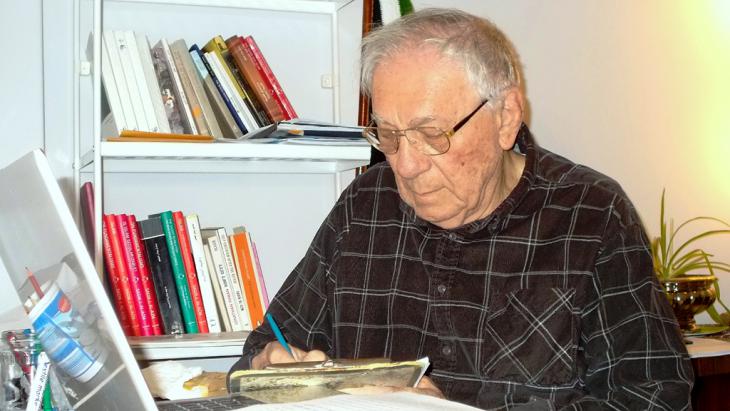 Though Damascene born and bred, al-Azm is a true cosmopolitan - with no nostalgia for his mother′s baking, no tears shed over the good old days, and no longing for the fresh scent of jasmine so reminiscent of Damascus. He has always preferred personal freedom with all its associated risks to the comfort of a familiar environment. By Yassin al-Haj Saleh

Sadiq Al-Azm′s productive life can be split into three stages: the sixties and seventies in Beirut, the eighties and nineties in Damascus, and the early years of the 21st century, when he divided his time between Damascus and the rest of the world.

Similarly, the personality of this Damascene intellectual may be said to have three distinct facets: the academic scholar, the political activist, and of course, the person of Sadiq al-Azm.

On the academic front, Sadiq Jalal al-Azm lectured in numerous universities, including the American University of Beirut, the Damascus University and the University of Jordan for a brief period in the late sixties, as well as in several Western universities.

His renowned books reflect the ideas of a thinking protagonist engaged in public affairs rather than an academic closeted away in an ivory tower.

His book, ″In Defense of Materialism and History″ (1990), provides the most insight into his own philosophical views, simultaneously expressing a clear political agenda at a time when communism was collapsing. In this work, al-Azm demonstrates an established foundation of materialistic and historical neo-critical theories and reveals the progressive, democratic partiality of his thoughts – just when the time was ripe for such thoughts to see the light. 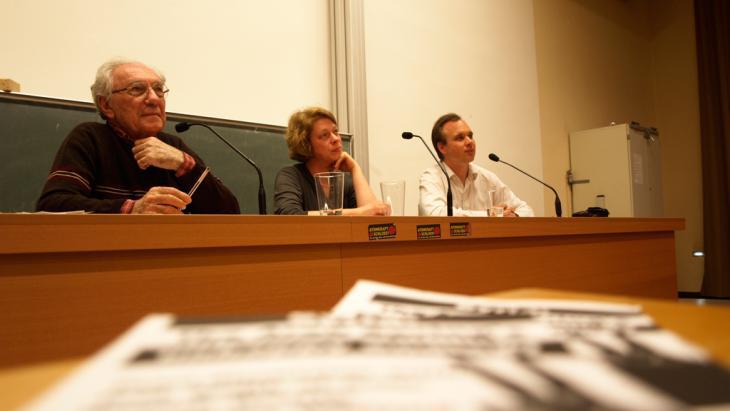 Considered one of leading Arab intellectuals writing today, Sadiq al-Azm has been an advocate of freedom of speech, human rights and democracy for decades. He is synonymous with promoting dialogue between the Islamic world and Western Europe. Owing to the escalating violence in Syria, the philosopher and his wife were awarded political asylum in Germany in 2012

Al-Azm′s interest in public affairs was directly triggered by the Six-Day War in 1967, although its ideological emphasis would change with the passing of the decades. Initially, during the 1960s and 1970s, he favoured leftist, pro-Palestine and pan-Arab ideologies. The 1980s and 1990s saw him turn increasingly to rationalism and secularism, before he finally settled on liberal democracy with the onset of the 21st century.

Sadiq′s interest in politics has been most pronounced during the first and third stages of his life. During the rise and fall of the pan-Arab movement, he was outspoken in his support for pan-Arabism; in recent years, by contrast, he has returned to his roots in support of the Syrian population. He was actively engaged in the ″Damascus Spring″ forums and the work of the ″Civil Society Committees″ at a time when Syrian intellectuals were petitioning for democratic reform.

As for the second stage of his life, i.e. the last two decades of the 21st century, Sadiq′s involvement erred more on the intellectual. At that time, the Arab world was submerged in tyranny on the one hand, and Marxism, the backbone of Sadiq′s intellectual identity, was losing ground due to the collapse of communism, on the other. During this period, many academics found it expedient to put their political convictions on the back burner.

Sadiq al-Azm′s most famous publication which still enjoys widespread appeal today is ″The Critique of Religious Thought″ (1969). It was this particular book that caused the author to be sued for denigrating Islam in Beirut, when he was professor emeritus at the American University there.

In general, it is safe to say that Sadiq Jalal al-Azm has made an impact over the last fifty years as an intellectual who is prepared to speak out about public affairs.

During this entire period, his utterances have been characterised by lucid style and a clarity of expression which has set him apart from his peers and contemporaries.

He is also known for constantly raising controversial issues, especially in his books ″Self-Criticism after the Defeat″ (1968), ″The Critique of Religious Thought″, ″The Mentality of Proscription″, and ″Beyond the Mentality of Proscription″ (1990s). These days, he is highly vocal in the debate about Syria; many of his interventions are considered controversial, the reaction is often one of ridicule and allegation.

One of Sadiq′s frequent claims is that every act of thought is debatable. This is no doubt an opinion with which many would disagree, but it must be said that he has always articulated his standpoints, critical, controversial or otherwise, with enviable clarity.

Sadiq was born into an aristocratic Damascene family, which likely fostered his early secularism. From the nineteen thirties onwards (and still earlier in Istanbul), secularism was actually quite common among aristocratic Muslim families living in Damascus and Aleppo. 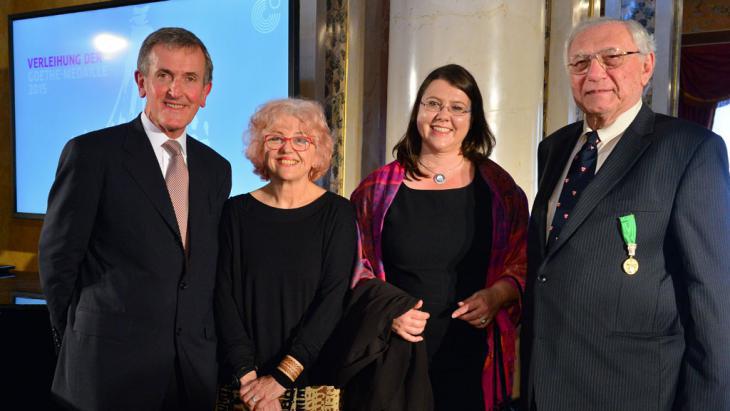 Indeed, Sadiq combined this elitist secularism with his leftist, social and political ideas. The resulting configuration led to him regarding himself not just as a Syrian, but as a cosmopolitan citizen, who could feel a ″spontaneous, justified and natural belonging″ to any country, city and culture. Compared to other Syrian intellectuals who have relocated to the West, and particularly during the third stage of his career and life, Sadiq has proved the most effective in adopting an outward, global perspective while remaining actively involved in his country′s affairs and the debate surrounding it.

It may be argued that the certain distance one senses between Sadiq and those in his immediate environment are down to Sadiq′s upbringing, his intellectual education and his own personality. Indeed, it has never been easy to get to know him.

No followers and no personality cult

Furthermore, he himself says he prefers colleagues, opponents, counterparts, critics and friends to partisans, adherers, followers, imitators and admirers. It is therefore hard to claim that a ″Sadiqi″ movement or a ″Sadiqi″ school of thought exists.

Indeed, in the long run, the lack of a movement is probably wiser and more democratic than rallying support, which has become synonymous with fanaticism and totalitarianism. Only time will tell.

Sadiq Jalal al-Azm has been awarded the Goethe Medal at a time when the Syrian revolution has turned overwhelmingly apocalyptic. There is no question: the recognition of the individual was deserved, but the award is a broader act of recognition of Syria the country.

One timeless attribute of Sadiq and his work is this interdependence between the personal and the public: a non-conformist intellectual firmly focused on the values of freedom, justice, reason and globalism.

Yassin Al-Hajj Saleh, born in the Syrian town of Raqqa in 1961, was arrested for political activity at the age of sixteen. He is an advocate of democratic reform and writes political features for various Arab newspapers, including "Al-Hayat", a pan-Arabic newspaper, published in London.

Arab youth express their hopes and wishes for the New Year, spanning everything from civil and political rights, to education, to arts and culture. By Rafiah Al Talei END_OF_DOCUMENT_TOKEN_TO_BE_REPLACED

Life imprisonment for crimes against humanity: that was the sentence handed down to Anwar Raslan in the world's first trial of a member of the Syrian torture system. Matthias von ... END_OF_DOCUMENT_TOKEN_TO_BE_REPLACED

Moncef Marzouki was Tunisia's first democratically elected president after the fall of dictator Ben Ali. Today he is the most prominent critic of increasingly counter- ... END_OF_DOCUMENT_TOKEN_TO_BE_REPLACED

Historically Iraq's Yazidi community was isolated, under-resourced and very conservative. Seven years after the "Islamic State" tragedy, the community is more open to the world – ... END_OF_DOCUMENT_TOKEN_TO_BE_REPLACED

In this new bilingual edition, translated by Humphrey Davies, al-Jawbari, one of the thirteenth century's leading experts in skullduggery reveals all there is to know about the ... END_OF_DOCUMENT_TOKEN_TO_BE_REPLACED

Comments for this article: Critical philosopher and political activist

Work "In Defense of Materialism and History″ (1990)

I have been trying to figure out if al-Azm's work "In Defense of Materialism and History″ (1990) is still available and whether it's written in Arabic and/or English. Sadly, I couldn't find any information on this work nor a sheer mention anywhere except for in this article... Can anyone give me a hint regarding this matter? :-)

END_OF_DOCUMENT_TOKEN_TO_BE_REPLACED
Social media
and networks
Subscribe to our
newsletter