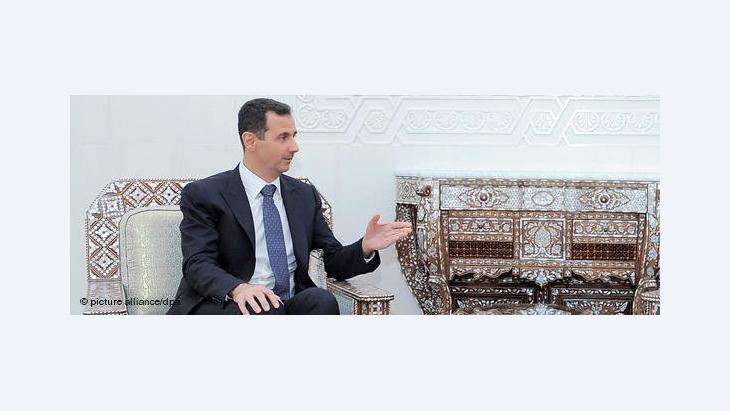 Just as he did in the "Damascus Spring", President Assad has again chosen to suppress the democracy movement during the current "Syrian Spring" that has swept across the entire country. Over the past eleven years, Assad has squandered no less than five opportunities to steer his country onto the path to democracy. That's at least one too many for him to have any credibility now when seeking dialogue with the opposition, says Kristin Helberg

Bashar al-Assad is not the type to draw attention to himself. He's not a front-line kind of guy. Compared with some of his former fellow leaders, his demeanour is reserved, almost shy and uncertain. The complacent gestures of a man like Hosni Mubarak are as foreign to him as the theatrical self-aggrandisement of a Muammar al-Gaddafi or the dictatorial bluster of a Saddam Hussein.

No, Bashar was not born with a thirst for power. He has had to grow into his presidential role, and his efforts to do so demonstrate that the shoes of his father, Hafez al-Assad, are too big for him to fill. Bashar is a rather half-hearted autocrat. For the Syrian people, this presidential miscasting was at first a source of hope, then of disappointment; now, however, it is predominantly a source of suffering.

Bashar al-Assad is an ophthalmologist who studied in Damascus and did part of his professional training in London. When he assumed power in Syria in the summer of 2000, he was just 34 years old. Following the death of the heir apparent, his elder brother Basil, Bashar was fast-tracked through a military career, completing it in 1994, and groomed by his father for presidential office. 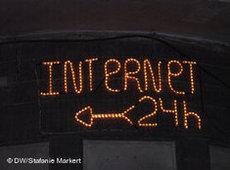 When he came to power, Bashar al-Assad favoured technological progress and joining the modern age over democratic reform in Syria

​​His real interest, however, lay in computers and the Internet. In 1989 he was one of the founders of the Syrian Computer Society, which championed the spread of Internet technology and later became an elite training ground for ambitious young politicians.

Assad's presidency got off to a difficult start. In the year 2000, Syria resembled a relict of the Cold War: isolated from the outside world, mired in Arab nationalist sloganeering, paralysed by the structures of a Socialist planned economy. The country was in danger of missing the boat and failing to join the modern age, so Bashar focussed on technological progress, opening up the economy and renewing infrastructure.

Money in the bank instead of under the mattress

He made the worldwide web accessible to ordinary people; Internet cafés became hugely popular, satellite television was officially sanctioned, new newspapers started up. However, radical political change was not on Assad's agenda: he saw himself as a moderniser, not a reformer.

He wanted Syrians to learn to keep their money in the bank instead of under the mattress, to take a number and wait in line instead of jostling in front of the counter, to take an escalator without fear and to use cash machines. But questioning the supremacy of the Baath Party or challenging the power of the Assad family remained taboo.

Viewed in this light, the "Damascus Spring" of 2001, a period of public debate and political awakening, was based on a misunderstanding. In his accession speech, Bashar al-Assad encouraged Syrians to take an active part in reshaping their country, but in doing so he omitted to draw the line. So when the country's intellectuals began meeting at salons in large private houses to debate about the future, they had to test for themselves the limits of the new freedom of speech.

​​Nowadays this question is easier to answer. If Bashar had really wanted to, theoretically he could have. In practice, his character stands in his way; for in order to make real changes he would have to curtail the influence of the military and the secret services, and within the system his father established, these two are the cornerstones of Bashar's power and his only legitimisation.

He would eventually have had to allow himself to be legitimised by the people, in order then to confront his family and others who had profited from the system. This was a course that Bashar himself would probably not have survived, politically speaking, so it was also necessary for him to be prepared to relinquish his own grasp on power.

In short, an orderly, bloodless transition to democracy in Syria would have required the courage, the vision and the personal greatness of a Gorbachev, and Bashar al-Assad possesses none of these qualities.

And so numerous opportunities to turn over a new leaf have been passed over. Five times Bashar has been presented with the possibility of changing course. The first was during the above-mentioned "Damascus Spring", although Bashar's inexperience and his small power base made the prospect of establishing a new political order in 2001 extremely unlikely. If at that time he had allowed the political debates taking place in Syrian society to continue, the security apparatus would probably have stepped in of its own accord and summarily replaced Bashar with a "more reliable" figure.

Four years later, though, the situation was different. Bashar al-Assad had replaced those at the head of the military and the secret service with his own people, and in June 2005 he also gained the backing of the Baath Party leadership. The party's first congress under Bashar ended with a vague prospect of political opening, the endorsement of social market economy and a declaration of war on corruption. For the first time, the power of the secret services was curtailed; Syrians no longer needed their permission to open restaurants, travel agencies or shops. 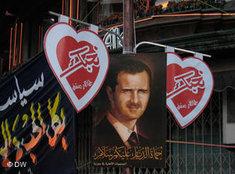 Personality cult and declarations of love for an authoritarian leader: posters of Assad in Damascus

​​However, nothing came of announcements that a new act would be passed regarding political parties and that stateless Kurds would be given citizenship; reform projects petered out, and soon it became clear that the minimal changes that had been made merely served to strengthen the Baath Party's hold on power and to ensure its political survival. A second opportunity had been missed.

2007 brought parliamentary and presidential elections, and Syria descended into a national frenzy. Whole façades of buildings were plastered with pictures of Bashar; bus shelters were adorned with posters proclaiming, "We love you"; hymns in praise of Assad blared forth from the radio. The Syrians celebrated their president as if eager to prove something to the rest of the world.

Developments in the region – American troops and civil war in Iraq, the withdrawal of the Syrian army from Lebanon in 2005, the accusations against Syria in connection with the assassination of former Lebanese prime minister Rafik Hariri, and the Israeli attack on Lebanon in the summer of 2006 – created a feeling of solidarity among Syrians, all the more so in the face of threats from Washington and the isolation policy of the Europeans.

Never before and never again have Syrians stood so united behind their president. Beyond the borders of Syria itself, Bashar became a figurehead for Arab interests, one of very few to stand up to Israel and the West. He had won the hearts of the Arab masses. It was the perfect moment in which to allow himself to be democratically legitimised in free elections. Yet once more Bashar lacked the courage. His second term in office began in July 2007 in the same way as the first: a referendum with no opposing candidates. A third opportunity had been missed.

One year later, Bashar al-Assad was back on the Western stage. In July 2008, President Nicolas Sarkozy of France invited him to the conference of the Union for the Mediterranean in Paris, a move that elevated Assad from EU persona non grata to sought-after dialogue partner.

Convinced of the necessity of including Syria in any solution to the conflict in the Middle East, European heads of state and foreign ministers came hot on one another's heels to Damascus. The argument that pressure from abroad was hindering domestic reform thus became redundant. With all this international support, Bashar al-Assad could finally have dared to introduce more democracy at home; but he passed up this fourth opportunity as well.

Much has been written about his fifth and most recent chance. Bashar could have taken the wind out of the sails of the current protests by introducing sweeping reforms right at the start. He could have positioned himself at the head of democratic change and sought dialogue with the demonstrators early on, instead of having them shot.

But just as with the first "Damascus Spring", in this country-wide "Syrian Spring" he has once again opted for the brutal suppression of the pro-democracy movement. That makes it no less than five opportunities that Assad has passed up in the past eleven years – at least one too many for him to have any credibility in calling now for dialogue.

Very different Western reactions to the suffering in Ukraine and the Arab world show that there is a profound rift among cultures. Essay by Michael Young END_OF_DOCUMENT_TOKEN_TO_BE_REPLACED

United Arab Emirates strongman Sheikh Mohammed bin Zayed al-Nahyan, who was formally elected president on 14 May, has led a realignment of the Middle East, creating a new anti- ... END_OF_DOCUMENT_TOKEN_TO_BE_REPLACED

Middle Eastern countries are still on the fence when it comes to the Russian invasion of Ukraine. Their citizens point to the West's double standards surrounding conflict and ... END_OF_DOCUMENT_TOKEN_TO_BE_REPLACED

For over fifty years, British photographer Peter Sanders travelled across the Middle East and further afield, seeking out the saints of Islam. His work uncovers a little-known ... END_OF_DOCUMENT_TOKEN_TO_BE_REPLACED

END_OF_DOCUMENT_TOKEN_TO_BE_REPLACED
Social media
and networks
Subscribe to our
newsletter