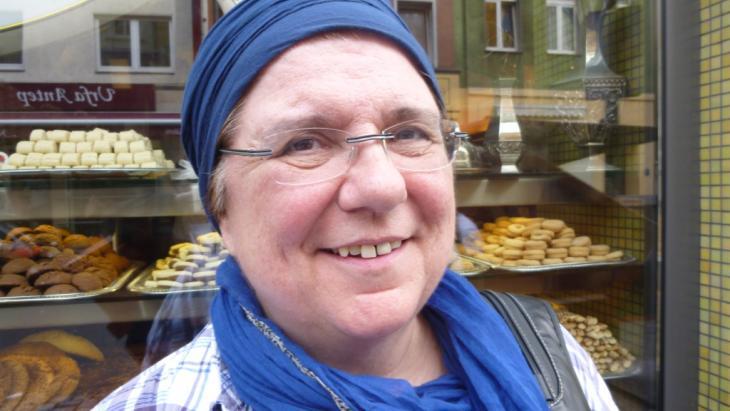 The women's movement within Islam is gaining momentum worldwide. One of the most influential German Muslim women in this respect is the theologian Rabeya Muller. With her clear views and breaks with taboo, she is pushing for change within the Muslim community in Germany

"Historically, the women's movement in Islam emerged around the mid-twentieth century," says Amina Wadud, perhaps the most prominent representative of Islamic feminism in the world today. At that time, the women involved did not focus specifically on Islam; they were Muslim women who campaigned for the political participation of women in public life. Their efforts centred on general female suffrage, participation in education and the safeguarding of human rights.

Born in the German town of Mayen in 1957, the young Catholic began her particular search after finishing secondary school. In the late 1970s, following detailed forays into the study of Protestantism, Buddhism, Hinduism and Judaism, she converted to Islam. "I felt it was the start of a path that I should continue to follow," she says. She then took courses in educational theory, Islamic studies and ethnology both in Germany and abroad before publishing her first writings on the status of women in Islam.

Even before she became a Muslim, Rabeya Muller was active in the women's movement. Right from the word go, she was critical of the prominent and at times controversial German feminist Alice Schwarzer. "I simply have a problem with Alice Schwarzer's generalisations with respect to Islam, and her highly undifferentiated view of it," she says. 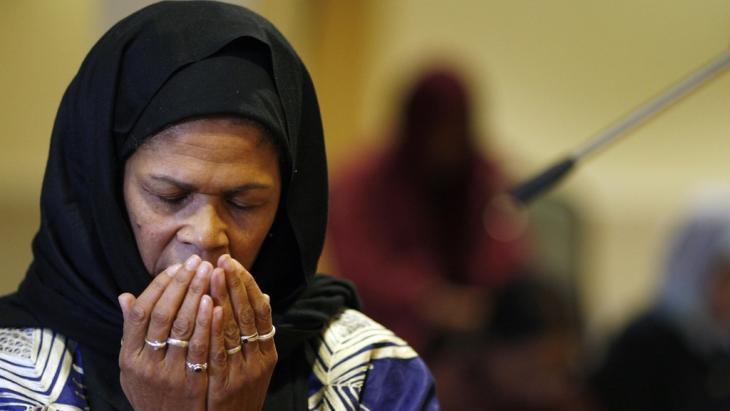 Prof Amina Wadud is a prominent American scholar of Islam who converted to Islam at the age of 20. She is thought to have been one of the first ever women to lead mixed Friday prayers when she did so in New York in 2005

Rabeya Muller, who is 57, is quick to point out that she has no issue with the concept of "feminism" per se. "Feminism is something that you shouldn't leave to people like Alice Schwarzer," she says, adding that it is a subject for all women. But doesn't Islamic feminism also profit from the achievements of the former icon of the women's movement? Muller disagrees: "I would say that we Muslim feminist theologians gain more from women within the Christian feminist ideology."

A gender-neutral reading of the Koran

In the US, Amina Wadud and her fellow campaigners are fighting for a new interpretation of the Koran; in Europe, Riffat Hassan or Asma Barlas campaign for a female-friendly reading of Islamic texts. So, are there also signs of a "gender jihad" in Germany?

"The Centre for Islamic Women's Studies (ZIF) in Cologne established the Islamic women's movement in Germany in the late 1990s," says Muller, one of the centre's co-founders, who goes on to say that it is thus far the only women's centre in Germany that implements this form of theology. The focus of its endeavours, adds Muller, is the development of a gender-neutral perspective on the Koran. By establishing links with other Islamic-feminist theologians worldwide, the centre ascertained that similar efforts are being made in this regard in many places.

Muller goes on to say that the first steps towards a gender-neutral perspective within Islam would consist of verbalising injustice, in other words highlighting everyday injustices that occur regarding gender difference, referring to them as such and resisting them. "If I assume that God is just, then I must also be allowed to read the texts attributed to him in this light. And that means I'm allowed to ask questions," she says.

Highlighting injustice and referring to it as such also means opposing patriarchy if necessary. Rabeya Muller is also known for doing this. But what grievances are Islamic women's rights activists in Germany addressing? Muller explains that above all, there are very few women within academia and in senior positions. Another major irritation is the current regulation that is often used to prohibit Muslim women who are married to non-Muslim men from providing denominational Islamic religious education. What's more, says Muller, the time has come to finally publicly address the question of the female Imamate. 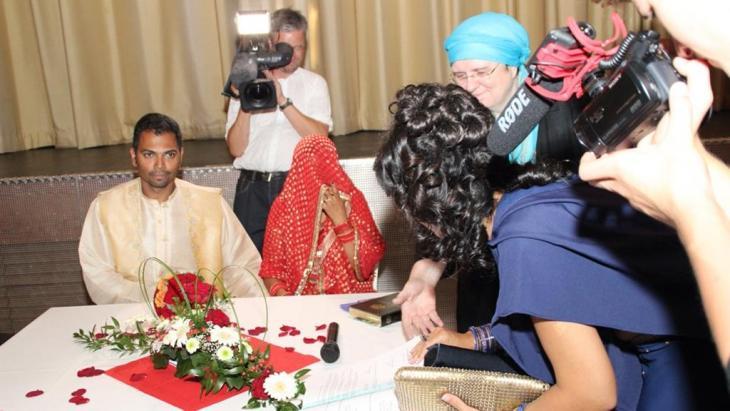 Rabeya Müller officiates at an Islamic wedding between a Muslim woman and a Christian man. Although her views of mixed marriages are controversial within the Islamic community, she says that there is nothing to say that Muslim women should not be allowed to marry non-Muslim men. On the issue of polygamy too, she is at odds with many Muslims. Says Müller: "I do not want to be a witness at a wedding where a man wants to marry a second wife. I have personal difficulties with that"

Representatives of the associations that are organised within the Co-ordination Council of Muslims (KRM) repeatedly point out that a theological education open to both sexes at universities is possible. "But we shouldn't forget one thing: imams are not educated at universities. This is where theologians receive their education, who then later become imams in the community – or in the Turkish community, hojas." In this respect, she says, it would certainly be important to reach agreement with the associations on a common position on the issue of the female Imamate.

The thorny subject of polygamy

Within the Muslim community of the Rhineland, Rabeya Muller's spiritual home, women and men take it in turns to lead prayers – a break with taboo in the eyes of many Muslims. "I see nothing in what is for me the relevant text, the Koran, that says this should not be done" says Muller. As long as the congregation that follows the prayers of the female preacher also supports her too, this is completely acceptable, she says. Nevertheless, she does understand that there are communities that do not want this and feels that they are perfectly entitled to hold this view.

The Cologne-based theologian is well-known within the Islamic community for breaches of taboo. For example, Rabeya Muller also oversees Islamic weddings. She serves as a witness of the marriage before God and conducts preliminary briefings with respect to the contract under civil law, where she also advises couples on regulations that apply in the event of a separation.

As far as Muller is concerned, there is nothing to say that Muslim women should not be allowed to marry non-Muslim men. Again, her view is not shared by many. But the feminist has her limits: "I do not want to be a witness at a wedding where a man wants to marry a second wife. I have personal difficulties with that," she says. The practice may be essentially permitted by Islam, but there are also male theologians who interpret the relevant part of the Koran as saying that polygamy is unfeasible in practice, she continues.

Rabeya Muller leaves the question of same-sex marriage open. She has not yet received a request of this nature, she says. "I know there are both male and female imams who do this." In such a case, one would have to seek theological justifications both for and against, before weighing these up. 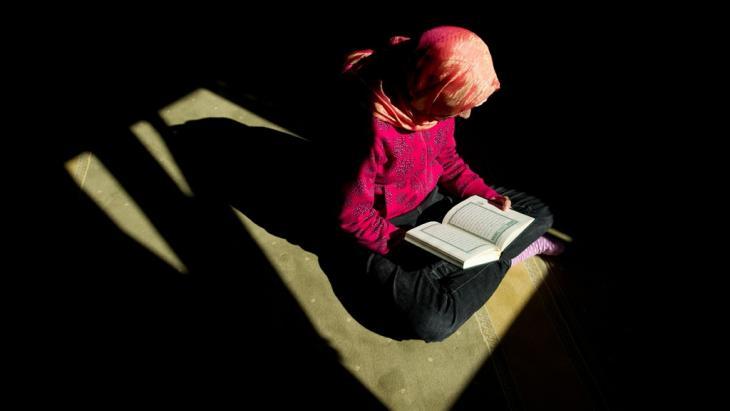 Müller is convinced of the need to act on the issue of emancipation and gender equality within mosque communities. She feels that women must learn that they are not just assistants but co-authors of everyday Islamic life: "If I participate in work, then I must also participate in the rights applicable to that work"

A stronger voice within mosque communities

It is also controversial that women and men pray together in the Rhineland Muslim community. On this matter, the theologian likes to point to a section of the Sunnah that suggests this is possible from an Islamic perspective.

Muller is convinced of the need to act on the issue of emancipation and gender equality within mosque communities: women themselves must learn that they are not just assistants but co-authors of everyday Islamic life, she says. "If I participate in work, then I must also participate in the rights applicable to that work," says Muller. Female Muslims should fight on their own initiative to secure greater involvement in decision-making and more respect. "And if it is decided that men and women should pray separately, then it is not ideal that the women's room often looks like a box room."

Rabeya Muller's conceptual approaches and self-perception make her one of the very few German theologians campaigning for feminism within Islam. She is involved in the composition of textbooks, trains teachers of religion and is responsible for numerous publications.

She is currently active as deputy director of the Centre for Islamic Women's Studies. Rabeya Muller pursues interreligious dialogue in many associations, and her commitment in this area has been outstanding. One of her latest projects is editorial work on a new interfaith women's magazine that focuses on feminist-theological issues.

Home
Print
Newsletter
More on this topic
Interview with Amina Wadud: ''Islam Belongs to All Its Believers''Book review: Zahra Ali's "Islamic Feminisms": Female emancipation based on the spirit of Sharia Qantara dossier: Feminism in Islam
Related Topics
Feminism in Islam, Gender, Islam in Europe, Islamic theology in Germany, Muslim women, Muslims in the West, Women in the Islamic world
All Topics

Giessen, Eichsfeld, Kusel, Berlin – cars bearing old German number plates are the latest trend on the streets of Cairo. Many Egyptians regard the discarded plates as chic. What ... END_OF_DOCUMENT_TOKEN_TO_BE_REPLACED

Tunisia has been going through a severe economic and political crisis in recent years. More than one in three young people there are unemployed. For many skilled, qualified and ... END_OF_DOCUMENT_TOKEN_TO_BE_REPLACED

German imams have publicly expressed their solidarity with the women of Afghanistan. In a letter of protest, the clerics say that the Taliban regime's decree barring women from ... END_OF_DOCUMENT_TOKEN_TO_BE_REPLACED

At the end of every year, the team at Qantara.de gives you a run-down of the ten most-read articles on the site over the past 12 months. Here is a quick overview of the stories ... END_OF_DOCUMENT_TOKEN_TO_BE_REPLACED

Social engagement is often motivated by religious factors. A new book explores the background to these community efforts and appraises how effective they are in helping to ... END_OF_DOCUMENT_TOKEN_TO_BE_REPLACED
Author:
Ulrike Hummel
Date:
Mail:
Send via mail

END_OF_DOCUMENT_TOKEN_TO_BE_REPLACED
Social media
and networks
Subscribe to our
newsletter